Winter’s been quite severe so far, what with our area’s first blizzard of the 21st century and foot-upon-foot of snow and ice.

Brr. It was fun when the snow first came down but after that, not so much.

Weather like that makes one yearn for steamy food, doesn’t it? So this holiday season, I cooked what is fast becoming a Burke family “heirloom-in-waiting”; a marinara sauce my brother-in-law learned of from a friend, and that I’ve been experimenting with as well. It’s delish.

Unfortunately you’re not getting that recipe from me […] 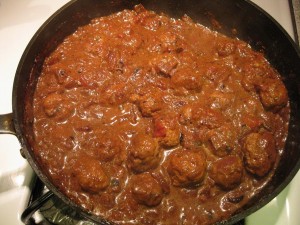 I “borrowed” the title for this recipe post from Shashi Bellamkonda‘s Carry On Curry, because I knew he wouldn’t mind (you don’t, right, Shashi?). If you haven’t read CoC, you should check it out, it’s great fun and extremely valuable for foodies in the DC metro area.

Koftas are basically the Indian version of meatballs. Just like the feringhis, we rarely eat them without some kind of gravy (or curry, which means many more things to us than a spice or herb). But we’ll often […]