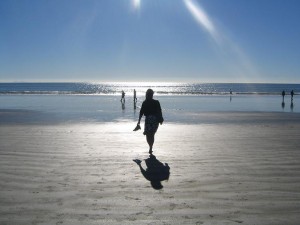 In a few days I’ll be Westward-bound; one of several hundred (or is it thousand?) PR and communication professionals converging on San Diego for PRSA’s 2009 International Conference (that’s me on Coronado Beach a couple years ago). My first experience of PRSA’s annual shindig was last year, when I was lucky enough to co-present with Katie Paine on measurement in Detroit.

The entire experience was a blast, and it will also live forever in my memory because that’s where I first met the beauteous and brilliant Shannon […]

The one thing I never expected when I started this blog was for it to be nominated in an awards program. Blogging, in and of itself, is an adventure for me, and while I’m thrilled with the warm reception “Waxing UnLyrical” has received, I’m also humbled by it. After all, I don’t blog as regularly as all the gurus tell you you should; so the very fact that anyone reads this blog is quite a thrill.

Home Is Where The Mouse Is… Maybe

A few days ago, Pew Research’s “Daily Number” was 38%: the percentage of Americans who, having lived in more than one place, don’t consider their current community home. Given that this is a country of immigrants, that isn’t surprising, and a feeling I (a naturalized American of East Indian origin) can relate to.

A couple of days later, we had a friend over for lunch. Canadian-born, he’s worked all over the world, including in several African countries, and now calls Liverpool, U.K., home. At one point he asked, […]