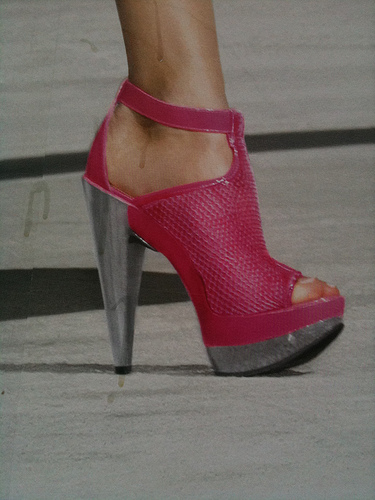 There’s something terrible about women when they get together.

And, in fact, if you read some of the literature that dates back as far as the Bible, that’s frequently the way the word was used (for example, when L. Frank Baum wrote of the “great and terrible Oz”).

It is this terribleness of women when they come together with no holds barred that absolutely enchants me. There’s almost a magic to it and when it happens, some people just don’t know how to deal with it.

For example, I remember back in the day when I was a PYT and would go out dancing at night. Sure, it was fun to dance with the guys, but if I found a few other women who were willing to join me in absolutely unbridled enjoyment of our bodies in motion, there was nothing like it.

There was something electric about it.

In fact, Kathy Korman Frey, the Chief Hot Momma at the Hot Mommas Project, described it as “electric energy” when she wrote about her keynote at the 2010 Women Grow Business Boot Camp, which was a half-day bootcamp for women entrepreneurs and those who want to join their ranks that I organized a couple of years ago in my capacity as then-editor of Women Grow Business (a terrific blog, you should read it regularly).

It was so electric that I literally had tingles. It took me about four days to come off of that high.

I experienced it again last night when I participated in #TGChat (many thanks to Janet Fouts for bringing in my client Victoria Marzilli of Oxfam America to help spread the word about their International Women’s Day campaign).

We were a bunch of women, many with a glass of wine in hand (not me, because I’m still not drinking), enjoying being with each other.

I’m not going to start beating up on men here. I like them. I’m even married to one. And apart from loving him, I also like him very much (two completely different things).

But outside of the fact that my husband is a wonderful person, he’s one of those men who doesn’t get frightened by this electric energy.

In fact, he revels in my terribleness (which is probably why I’m married to him).

It’s pretty pathetic that there are many men who don’t, and who can’t handle it. Why else would a certain right-wing commentator lambast a woman he doesn’t even know for simply speaking out about her right to have access to healthcare coverage for her reproductive system? Which access, by the way, doesn’t just “control birth,” but can help manage other diseases like endometriosis, which I suffer from.

It seems there are also women who can’t handle it; there was a recent report from Australia on “highly feminised [sic] industries dominated by gangs of women and branded ‘pink ghettos.”

An anonymous (isn’t that convenient?) senior female exec is quoted in that article as saying,

“I really worry that it makes us appear to be a bit of a ”˜pink ghetto,’ so that we’re perhaps taken less seriously by management.”

Fyi, Ms. Anonymous Senior Exec, if you’re that senior and you “really worry” about it so much, you’re in a position to change it.

And the only type of person that management takes less seriously is someone who doesn’t know how to, or isn’t interested in, doing the job right, women or men, thereby negatively impacting the bottom line.

Oh, also, women in PR and HR are not “gangs.” There might be a lot of us who enter the professions because of a natural aptitude for people management and communication apart from a whole host of other skills, but we’re pretty darn good at what we do. That’s why we do well.

And if we can kick butt while enjoying our femininity and wearing kick ass pink high heels, why shouldn’t we? If anything, people should be super-awed at the fact that we can carry that off, not dismiss us because we happen to like fashion. 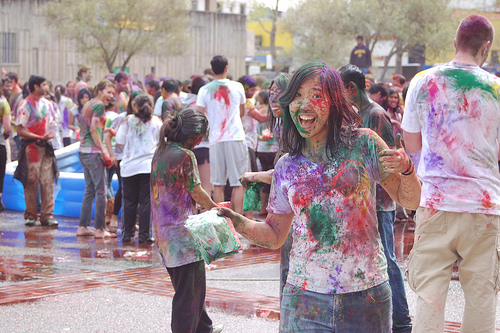 Why is it that by and large, groups of women are only acceptable to the public consciousness if they are being cutesy or complementary to all the yang out there, somehow serving to achieve a greater, male purpose?

In addition to being International Women’s Day, today is also the Hindu festival of Holi.

For those of you who don’t know it, it’s the festival of colors, and is celebrated throughout India and the Indian diaspora by people throwing colored powders on each other and quite frequently imbibing, er, bhang. My guess is it’s the only time each year that every generation in Indian families gets high together.

Probably the most popular myth associated with Holi – which, bhang aside, is basically a spring festival and a ton of fun (don’t do the bhang!) – is that of Holika and Prahlad. You can read the whole story via that link, but basically, Holika was the sister of a demon king, and her nephew (the king’s son) was an ardent devotee of Lord Vishnu (one of the Hindu trinity).

Said king was so mad that said son was a fan of L.V. instead of him, that he convinced his sister, who was endowed with the ability to come through fire unscathed, to try and burn Prahlad by going into a fire with him. Of course, good triumphed over evil, and she burned but he didn’t.

I have no problem with the “good over evil” part. But dang, Holika basically got booted from Planet Earth because she was trying to do her brother a solid.

Like I said earlier, this post is not about beating up on men. But it’s high time everyone started accepting – men and women alike – that the “terrible,” electric energy of women is pretty terrific when it’s allowed to come through in full force.

We should be doing everything we can to release it.