A Pre-International Women’s Day Tribute to my Mother

Today’s Leap Day. If you know someone who’s celebrating their birthday today, make it good… I mean, they won’t get to celebrate it again for four years! And don’t tweet anything silly…

OK, now on to today’s post. Disclosure: this is a client campaign I’m working on, which means I get paid to work on the campaign (primarily blogger outreach), but I do not get paid (or was even asked) to write this post. I’m writing it because I think it’s a cool campaign and I have the chance to tell you of how you can celebrate the women who’ve inspired you in a really fun way.

is Oxfam America. The work came about rather suddenly, and while I’ve been aware of Oxfam itself for years, I never really focused on just how much they do around the world to alleviate poverty, hunger and social injustice.

This photo is of a woman in Banakoro, Mali, pounding beans to make into flour. Photo: Rebecca Blackwell/Oxfam America.

So when politicians talk about removing inequalities, wiping out poverty, yada yada yada, they shouldn’t just be including women in the discussion, they should be actively trying to empower women, so that these imbalances are corrected.

I mean, women make up half the population on Earth. How on earth [sic] will these issues ever be corrected, in the long-term, if women are not a part of it?

So that’s what Oxfam America has taken on.

Since International Women’s Day is coming up (March 8), there are some really fun ways we can all start to give women and girls a voice, celebrating the power of women to change the world… and it doesn’t cost us anything, except maybe a few moments of our time:

What I’m going to do is this:

Today, my eAward goes to my mother (I call her “mum,” don’t laugh, I know it sounds very Brit). I don’t write about her a lot, because when I start thinking of just how much she has done to raise not just my siblings and I, but countless children, I tear up. 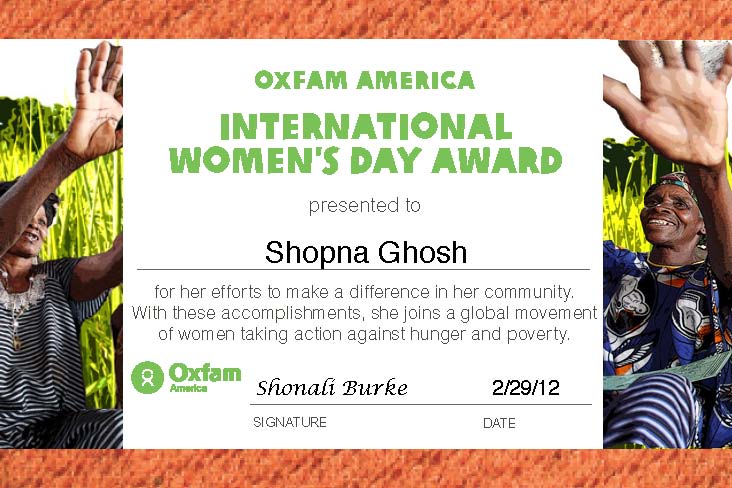 You see, my mother was a teacher. I should say “is,” because even though she’s now retired, she’s still teaching.

My mom is quite an incredible woman; she fell madly in love with my father at the age of 18 and decided not to go to college in order to marry him and start a family. As a result, I was born (I’m the eldest) when she was just 21 (our birthdays are two days apart), and then she spent the next several years doing just that – starting and raising a family.

When my brother was of an age to go to kindergarten, he was enrolled in a Montessori school, and my mom got a part-time job teaching there (she comes from a family of teachers and educationists, as does my dad). That part-time job became a full-time one, and then she moved from that school to one of Kolkata’s (and India’s, actually) most respected K-12 schools for boys.

At that school, she started out teaching at the primary levels, and then worked her way up to the intermediate levels and then the “senior” school (which is basically grades 9-12). And since her career progression required the stamp of education, she decided to go back to school at the same time.

So my mom and I ended up both earning our bachelor’s degrees at the same time (she was around 40), and I am so so proud of her for doing that while managing a full-time career, three rowdy kids at home, countless rowdy kids at school and everything else.

And you know what? She didn’t stop there. After her bachelor’s, she earned more degrees, including a B.Ed. (Bachelor’s in Education) which is a requirement for tenured teachers in India. And she didn’t take any time off to do any of this.

While she was working (and studying), she somehow found the time to also run an afternoon school for street kids that was held on the premises of St. James’ (the school she retired from). So it was work all day, a quick lunch, and then more teaching kids who were so desperate to go to school, but whose parents (if they had any) couldn’t afford to send them.

She also tutored kids who needed extra help at home, including neighborhood children, and the kids of the help we had at home, because she was determined that no child would go without an education if she had anything to do with it, dammit.

(She’d never say “dammit.” That was me, adding it in for dramatic effect.)

Somewhere along the way, she started writing textbooks, and now her books are used in schools all over India. Let me repeat that: ALL OVER INDIA.

You think I’ve done some cool stuff? I’m nothing compared to my mother.

Thank you for relentlessly bringing education and learning into so many hearts.

Thank you for being my foremost inspiration (even if you don’t think you are, and I don’t tell you enough!).

Thank you for teaching me, my brother and sister, and so many people, that there is nothing you can’t do if you put your mind to it.

For that, and so much more, thank you. I love you always.

Now that I’ve stopped crying (hey, I get emotional when thinking about my mom!), tell me: which women have inspired you? Why? What is the lasting impact they’ve left on you? And don’t you think they deserve one of these cards, or an award, or both?