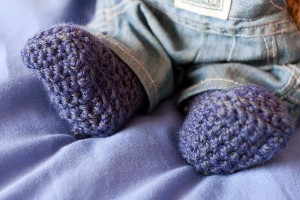 My parents were quite the partygoers when they were young. They were also extremely devoted parents (I was born when my mother had just turned 21), so many of my childhood memories are of hanging out at “grown-up” parties.

Yes. They’d take me along (and later, my sister and brother) rather than leave us home, attended to by the nanny.

I don’t know if that’s a shocker in this day and age, but I remember feeling rather chuffed that I was in the middle of all these big, glamorous people.

Part of the merriment

invariably entailed the classic party game, Joke Telling. And each of my parents had their favorites. My mom’s was “blue booties” (this is one of the variations on the Web) and it went something like this:

Two babies, both dressed in frocks (as used to happen), were arguing about which of them was a boy, and which was a girl.

This went on for a bit, until finally the boy baby beckoned the girl baby closer. He said, “You know how I know I’m the boy?”

would laugh uproariously, and I’d join in, even though I didn’t really understand what was all that funny about blue booties.

As I grew older, I did understand. And I still always smile when I think about it.

It’s so sweet. It’s so clean, especially compared to some of the stuff we see, hear and read on a daily basis. It’s just charming to me.

And I think we all need a little charm in our lives.

So if you’re having a bad day, think of “blue booties.” It will make you smile.

And you know how I know I’m a girl and you’re a boy? Pink booties. (Sorry, couldn’t resist!)