Change Before Mediocrity Grows on You 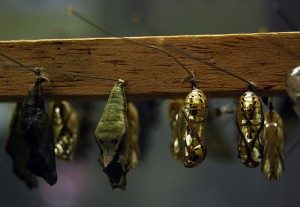 You know this, so you’ll spend the entire process weighing the pros and cons, predicting whether this is something you “really need” or just a lark.

You’ll wonder whether it’s a change you can “live with” (or what, I wonder?) and what other people will think.

You’ll stall for all those reasons, pretending you’re still thinking about it when really you’re avoiding the thought of it the way you would a plague-infested rat.

And it’ll cost you.

While you’re not sure if you want to do or be something “different,” people have already thought what they will about you.

You’ve already forfeited the most recent chance you’ve had to implement something new because you’re “just not sure yet.”

You’ve already wasted time doing something you do know for sure isn’t worth it””at least not any more.

People move on, and so does time. Time is money, and people spend both. So there’s no real way to count how much of either you’ve lost.

There’s a difference between research and beating a dead horse.

There’s a difference between working with what you’ve got and playing with it. Find those differences, keep them in your sights, and move forward before mediocrity grows on you.

To do so, you’ll need to do three things:

Yes, you do need to do something about the methods that work you hard but hardly work.

It’s not going to kill you to admit to yourself that you, your decisions, and your business aren’t perfect.

Get over everyone else.

They’ll threaten you with poverty and weight gain. They’ll tell someone doing the opposite of you the exact same thing.

Implement, implement, observe, repeat. I’m not the most organized or systematic person out there (my family would read this understatement and shortly need oxygen machines to make up for the loss due to laughter), but I like an ROI as much as any businessperson.

Experimenting is never a waste of time.

It’s wise to have a map, but you don’t need a guarantee just to arrive at the x-marked spot.

Whether buried treasure awaits or not, you’ll never know until everyone you’ve ever met along the way remembers you not as a gold-digger, but as a treasure hunter.

Or at least as somebody after something special.

That is worth it.