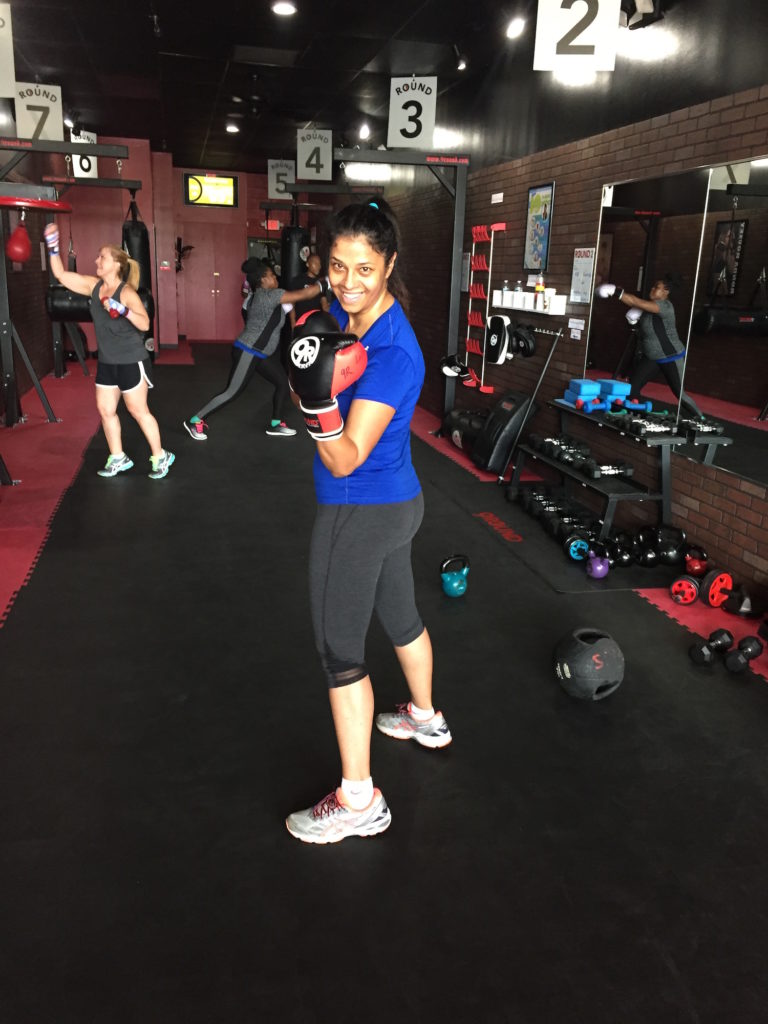 OMG it’s July already. How did it happen?! Do you have fun holiday weekend plans?

So, yesterday I went for my first kickboxing class at a <well-known kickboxing franchise> location. I’ve never taken one before, so had no idea what to expect.

I had a blast! That’s me post-class.

What I did NOT enjoy was the trainer shouting “GO SHONALIIIII” 500 times during the session, telling my friend (woman @ left in pic) she shouldn’t talk to/disturb me, but doing that incessantly himself … to try to get me to sign up.

I was like – whoa. I literally just came here, haven’t even been through the whole workout, and you’re already patting me down for my pocketbook?! (In my head, of course.)

Which didn’t stop him from CONSTANTLY reminding me I needed at least 4 sessions before they could “assess” me, they couldn’t really put me through the wringer unless I signed up, blah blah blah.

And when I made it clear I wasn’t signing up, he pretty much lost interest in me.

But it was a really good workout. So you know what happened next?

Since my own trainer has just announced boxing classes (he does small group High Intensity Interval Training classes that are fab), I’m signing up with him.

My own trainer has NEVER tried to overtly sell to me. He focuses on adding massive value and building a relationship FIRST.

He pays attention to what I need, makes sure I’m doing ok, makes sure I KNOW what he’s got coming down the pike … and then, when I’m ready, is happy to sign me up for whatever I want.

But the way he asks for the sale is to show me the value I’ll get.

These are the basics of smart social selling. And asking for the sale by demonstrating your VALUE is critical.

Take my Master Course, or my 1:1 coaching program that I’m rolling out at a super-affordable level.

Do I tell you what I have available? Yes.

Do I suggest you think about working with me if you need some kick-box, er, -butt ;) super-intensive coaching to move to the next level? Yes!

But I’m also doing my damnedest to provide you with tons of value EVEN IF YOU DON’T.

Whether it’s through this blog, or my emails, or the webinars I teach, or the workshops I do, or the Social PR Posse Facebook group, or the #measurePR Twitter chat …

Because I really DO care about sharing what I’ve learned and paying it forward.

Here’s the thing: “selling” is not a bad thing. It is, in fact, providing the ultimate service to your audience because of how you can help them take action to literally change lives.

So that is one thing that most of us need to get straight in our heads, especially PR people who “hate sales” as much as they “hate math.” ;)

But it is only when you truly love what you do, and your eyes shine when you think of how passing that on can change someone’s life, that the sale starts to happen effortlessly.

Because you care enough. And that’s at the heart of smart social selling.