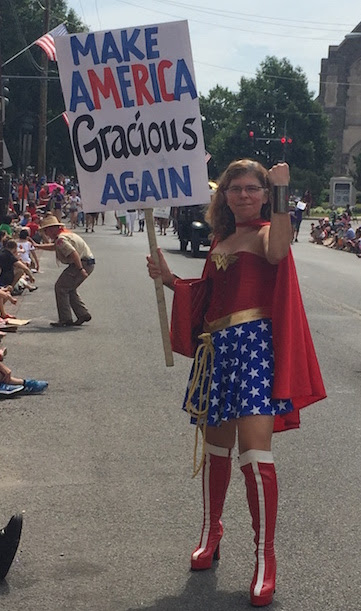 Wonder Woman showed up in my life in no uncertain way twice this past week. And she made me wonder (sic):

How much effort do we really put into becoming who we say we want to be?

The first time WW showed up was at the Takoma Park, Md., 4th of July parade (please don’t take this as a political statement from me, it’s not).

I totally ♥ this woman.

I have no idea who she is (other than “Wonder Woman,” d’oh) but I loved how she took a pretty volatile political meme and disarmed it … just by changing a few letters and putting on a kick-butt costume.

But she did more than just that.

By changing those few letters and putting on a kick-butt costume – in and of themselves extremely simple acts – she showed us who she sees herself as, what she cares about … and what she’s doing to bring the two together.

The second time was when I saw “Wonder Woman” in the theater this past Friday (I know, FINALLY). If you haven’t already seen it, you MUST.

Not only is it beautifully filmed and choreographed, it is absolute balm for weary souls, and not just female ones.

Because it reminds you of how your belief can literally change your world … if only you have the guts to follow it through.

These two very different “wonder women” have been on my mind this entire week because they reminded me of two truths we easily forget:

1. It doesn’t take a lot to start changing your reality, as TPWW (Takoma Park WW) showed.

Just a few letters and a kick-butt costume, but boy did she put a smile on everyone’s face, not to mention those of several little girls.

You just have to start somewhere.

2. If you want to really change your life, your reality, you have to do the work, of course … but you have to believe you can do it.

In the movie (mild spoiler alert if you haven’t seen it yet), Diana spends years training to become an Amazon.

But it’s not until she truly believes she is one, that she becomes one.

I’m getting pretty philosophical for the beginning of the week (why not?!) – but it strikes me that life – and, accordingly, one’s career – really is that simple.

And without even knowing it, you’ve suddenly climbed a mountain, and are at the top of your game.

What are you doing today to change your world?

Are you going to buckle down and learn about a social channel you’ve been intimidated by thus far, maybe devote 30 minutes to it this week? Just 30 mins!

Are you going to finally put in that job application for your dream job, that you’ve been obsessing over for the last three weeks? How will you get the job if you don’t even APPLY??!!!

Are you going to take that leap of faith to super-charge your Social PR career through a kick-butt coach (maybe even me!) who can give you the hands-on guidance you know you need but are dead scared to invest in? Leaping is scary. But everyone’s gotta leap!

Whatever it is, here is what I want you to do today:

Because the journey of a lifetime really does start with just one step.