If you don’t already know her (she was featured on WUL a while back), it is my distinct pleasure to introduce you to Danielle Heiny.

The first contact I had with Danielle was in May 2016. She was one of many who threw their hat in the ring during one of my free trainings to win a complimentary seat to my Social PR Virtuoso® Master Course. Entrants had to say why they deserved that seat.

Here’s what Danielle wrote (a panel of judges scored all entries and picked the winner): 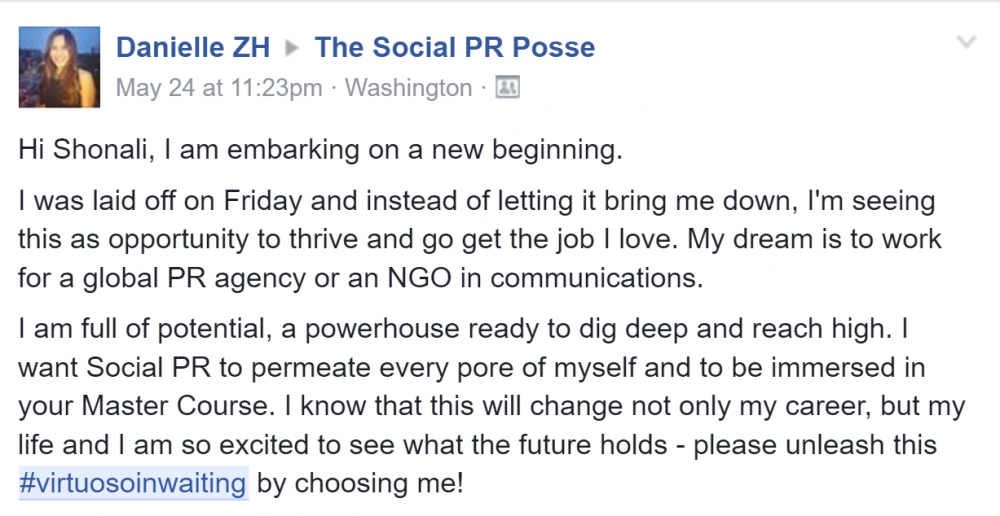 Now, Danielle could have won that seat and then… done nothing with it.

After all, you get lifetime access to the program, so what’s the rush, right?

She started to proactively implement what she was learning once she landed her new job, making FULL use of the resources at her disposal (the private community-supported group for Virtuosos and other Master Course bonuses).

This started to result pretty quickly in her initiative and results-driven approach proving the business value of Social PR:

But Danielle didn’t stop there. Ohhhh no.

“Due to all of your excellent efforts to provide accurate, informative, and engaging information to the public, you’ve helped our clients grow their base of Twitter followers who now have easier access to new [redacted] data, publications, and events.

“Not only have you grown the number of followers, but the quality of the information posted has really improved over time both in terms of content as well as visual presentation.”

Just think about Danielle’s journey for a moment.

Think about how far she’s come, from the time she first contacted me, shortly after she’d been laid off, to where she is now.

It hasn’t even been two years! But it goes to show what you can do when you put your mind to it. “Climb every mountain, ford every stream…” that’s literally what Danielle is doing.

Inspiration for a new year

We often start a new year with incredible enthusiasm. All too frequently, that fades rather quickly.

And that is why I’m telling you Danielle’s story (at least, her story thus far) as we count down to 2018.

Because I, for one, will think of what she’s accomplished in a year and a half every time I start to feel discouraged.

I know it will pick me up… and I know it’ll do the same for you.

Here’s to climbing every mountain in 2018. Happy New Year!