How A MacBook Changed My Life 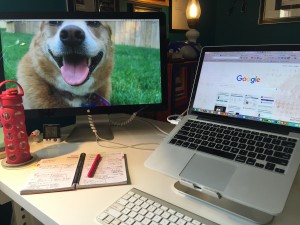 I didn’t know very much about Macs then. Scratch that – I didn’t know anything about Macs then! They seemed to exist in an alternate reality populated by creative types tattooed all over, who imbibed copious quantities of Scotch as their screens radiated magic and mystery.

These sleek, funky machines were imbued with the gift of producing visuals, graphics, and who knows what else, to which the rest of us mere mortals could never aspire.

It wasn’t until nine years later that I switched over from a PC. My very first laptop was a Gateway, anyone remember them? And then, for years I was a Dell gal (“Dude, you’re getting a Dell!“).

And then I got my first MacBook Pro.

I thought I’d died and gone to heaven.

No coils of cords that you had to unravel, and figure out what went where. The power adapter was it.

I was so scared of it – and of doing something wrong in the setup – that I called Mary Barber in Alaska, who I knew was a bonafide Mac-head. She helped me get up and running by quoting her husband:

“It’s like a toaster. Press the button and it’ll work.”

Since that fateful day, I’ve gone completely over to the Mac side, and taken my husband with me. And while some of the new devices from other manufacturers coming out are really tempting, it will take a lot for me to renounce my citizenship in the Land of Apple.

Because the Mac changed my life.

Once I saw how easy it was to use – and that in and of itself is pretty mind-boggling for anyone visiting from PC Nation, no drivers to install, no gazillion useless HORRID apps and stupid games you don’t want cluttering up your computer! – I was hooked.

And I kept pushing my own boundaries to see what else I could do with it; how I could put this piece of equipment that was NOT cheap to work.

Now, the stuff I started doing can usually be done with PCs as well. Video-editing, graphics… all sorts of stuff, because nowadays you can almost always find software and/or apps that will work on Macs or PCs.

And there are still a lot of MS products I use, like PowerPoint, etc.

But what my first Mac taught me, which was life-changing in the sense that I internalized what I’d always known theoretically, was two-fold:

As an example of both, check out my NEW e-guide and worksheet (it should be floating to your right as you read this). I pulled it from the November 2015 online mini-training I did, and it’s chockfull of really useful information (and it’s free, so grab it while you can!) … but it’s also pleasing to the eye.

I’m not at all saying you should not use external resources; of course you should, depending on what your needs and budget are.

On average, there are at least three people I turn to on a regular basis, depending on what’s going on:

(I highly recommend all three of them if you’re in the market, btw.)

There are times I have to, because I simply don’t have the chops/bandwidth/both for whatever it is that needs to be done.

But a lot of the time, I don’t have to. That’s one of the really remarkable things about living in this day and age, doing what we do.

Look at how much great shit we can do ourselves! And doing great shit, over and over again, is how we build our careers and our businesses.

So while I was blissfully unaware of just how much OS X was rocking the world back then, I’m sure as heck grateful now that it did.

Because it literally changed my life.

Do you remember a specific moment when technology changed your life? I love hearing these stories, so please share below if yes!