This week, I found out that one of the two semifinal matches of the 2011 Cricket World Cup is taking place this coming Wednesday.

It will be between India, my country of origin, and Pakistan…

and starting at the unearthly (for the U.S.) hour of 5 am EST.

(That’s me peering through the gates to the hallowed grounds of Lord’s, by the way, when I was in London about a year ago.)

So naturally, I will be taking the day off, so that I can watch it live on www.crictime.com.

I imagine I will be tethered to the laptop, with a mug of hot tea warming my little hands (they are actually quite little), watching intensely, and alternately moaning and shrieking with delight.

My dog, Suzy Q., will probably be shaking her head at “silly Mommy” and my husband will have shut the bedroom door so that he doesn’t get woken up by my yelling.

There will be absolutely no point in my pretending to work.

Because for me, as for many other people in and of cricketing countries, cricket is more than a game.

It’s even more than a passion.

I sheepishly admit to having gotten religion at the age of 15 or so, when Imran Khan (yes, a Pakistani) was one of the world’s most famous cricketers, albeit as much for his total hawtness as his cricketing ability.

I mean, the dude was sizzlin’!

And then he got religion, which is a whole other story, and has become a bit baggy since his heyday, but he’s the reason I fell in love with the game.

I also sheepishly admit to having fallen off the wagon for a while, since it’s not as easily viewable here in the U.S., but now that the matches are being livestreamed over the Interwebz, I can get back into it, at least for a bit.

For those of you who still don’t get the game

(you understand baseball, what’s so difficult about cricket?!), here’s a funny explanation of it. 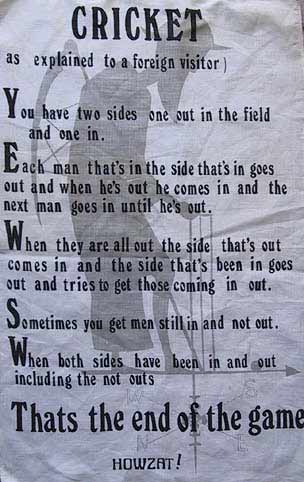 Apparently this originated on a tea towel some decades ago, and it’s become known as the “tea towel explanation of cricket.”

I remember seeing it on a poster when I was growing up, and thought it was hilarious.

It probably hasn’t left you any wiser, if you have no idea how cricket is played, but you’ve got to admit it’s funny.

(By the way, my husband, who lived in England for some years while with the USAF also couldn’t understand the game until he watched the Hindi film Lagaan.

Why am I telling you all this?

1. If I’m going to be as authentic online as off, I can’t get any more authentic than this.

2. How cool is technology? A few years ago, I wouldn’t have been able to even dream of watching a match taking place halfway around the world, that too, live.

And you know who told me about Crictime? The owner of my local gas station, who is Indian.

3. Watching the game in real time will make me happy.

And when I’m happy, I work better, which is all the better for my clients… and for you, because then I don’t have to worry about WUL going through death throes by getting into a blogging impasse.

In other words, it’s me being heretically productive.