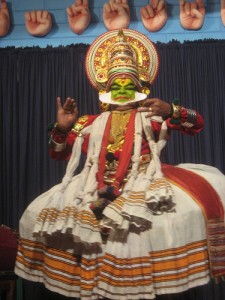 I wrote this in 1992, when India was just starting to experience a loosening up of the airwaves, with access to things like American soap operas and MTV (though MTV India wasn’t launched until a few years later). Doordarshan – Indian public television – was suddenly no longer the only entertainment option (and I use the word “entertainment” loosely).

Artistes like Anuradha Paudwal, a popular Indian singer, were in danger of being toppled from their pedestals as more Americanized performers started to appear. Words like “yuppies” were making their way into our vocabulary, foreign brands were moving from the “black” to the “white” market, and the cocktail party circuit was bulging with “culture vultures,” as they were often referred to. India – at least, my India – was encountering a kind of cultural colonialism from “the West” that it was unsure of how to respond to. (Whether or how it responded is a whole other discussion.)

I was in drama school, and this poured out of me after a particularly cathartic exercise. I was naive enough to believe that a “four-figure job” was something to aspire to. Re-reading it, I point a pretty good finger… but it was always pointing back at me as well.

Oh, one more thing: we don’t use American-style punctuation in India… at least, we didn’t then. This is just as I wrote it, many years ago.

Life is treating you right; the future seems great
A four-figure job; not much longer to wait
Till you get that promotion you’re so sure you deserve;
After all, you’ve got grit; you’ve got style; you’ve got nerve.

From Gucci to Nike, you’re in step with the times,
And you talk over cocktails on escalating crimes
In the city; and you deplore the fate of the planet,
And wonder why on earth someone just doesn’t ban it –

All this ‘unenvironmental activity’ and ‘pollution’
And ‘smog’ and ‘deforestation’ – what’s the solution
To the ‘widening ozone hole’ and the ‘greenhouse effect’?
To the ‘oil spills’ and ‘global warming’ experts detect?

In your world of plastics you sit, quite satisfied
That you’re doing your best; that you really have tried
To make people aware of the knowledge you glean
From ‘TIME’, ‘Newsweek’ and the idiot-machine.

But where were you when the earth was thrashed,
And the mountains were whipped, and the trees were lashed,
And the streams and the rivers and the valleys were bound
And were doomed to death ? Not a whisper, not a sound.

Thank you for stopping by.