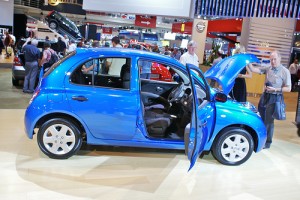 Finally! I have a new car!

It took me just 24 hours to gather advice from my friends and family and decide which car to buy (unlike how my dad used to endlessly agonize over the same decision).

Social tools have helped break down barriers between people, and information sharing has become far easier and quicker. These days, it moves really quickly… we now get to know about earthquakes around the world on social media platforms even before the news reaches broadcasters.

Facebook is becoming the ubiquitous answer to all the questions you could possibly have. It still doesn’t bet Google, but if you want an opinion from your family and friends, Facebook will give it to you in  real time.

According to a Mckinsey report, social media enables a consumer’s decision-making journey. It further states that monitoring what people say about your brand is important, as it is seen as a core function of social media, relevant across the entire consumer decision journey.

And speaking of buying cars, Nissan Motor Company came up with a social media campaign to engage younger Indian drivers for the launch of its “Micra.”

According to an article in the Economic Times, the Micra, which was positioned as a low-cost car for young Indians, saw sales of a little over 12,000 units in the nine months between July 2010 and March 2011.

And that’s when its Communication team thought that it needed to do something different to engage young Indians to buy their first car.

Like most of companies in India, Nissan signed a Bollywood celebrity (Ranbir Kapoor) as brand ambassador. However, to use a different celebrity approach in their communication and outreach efforts, they created a Facebook campaign to create “buzz.”

Entitled “Nissan Star of India,” the Facebook campaign started in September 2011. What made it different? To reel India’s star-crazy youth in, the company gave people a chance to act with Ranbir Kapoor in a commercial for Micra.

What did the contest entail?

People who visited Nissan’s Facebook page had to upload a video of themselves. After an initial lull, the buzz began when a teenager uploaded a candid dance video of hers.

This attracted a lot of traffic to Nisaan Micra’s Facebook page, and encouraged other young people to participate.

Over October and November 2011, Nissan selected the best videos and picked 20 winners. But that wasn’t all; around the same time, to create buzz about the winners and Micra launch, the company began on-the-ground activities across high street malls in nine cities.

According to the Economic Times article, through this online campaign, Nissan India received 538,712 likes on its Facebook page. A little over 7,400 people on the site were talking about it, and the final 4.5 minute video has been seen by 50,722 (and counting) people on YouTube.

And Nissan sold a little under 31,000 Micras since launch till end-March.

I thought this was a pretty innovative campaign… but what about you? What do you think about the company’s use of Facebook and YouTube? I’d love to hear your thoughts in the comment below.