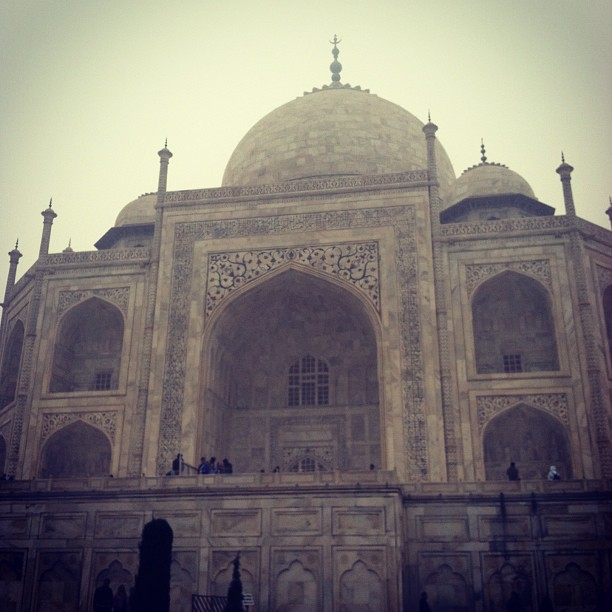 You’ll recall that before we left 2012, I told you I was going to India for a long overdue trip home. Well, we had a wonderful time catching up with family, friends and high school buddies (my class’ 25th reunion!). Among other highlights, we went to church as a family on Christmas Day, I got to show my husband my drama school and the Taj Mahal (and even check in there on Foursquare!), and he petted numerous street dogs all over India.

Here’s a look at the Flickr set of our trip:

We were also there just after what has to be one of the most shameful crimes in the history of the world – the horrific Delhi gang rape tragedy. Even calling it “horrific” and a “tragedy” seems inadequate.

I mean, just what do you call an act of such extreme viciousness and violence – where a perpetrator isn’t satisfied with inflicting extreme pain and the ultimate indignity on a woman, but then pulls her bowels out with his own bare hands?

I have no words. It makes me ill just to think about it.

So it was an eventful trip.

Despite all that, though, we had a wonderful time, as you can see from the photos. Because we were in one of the most vibrant countries and cultures in the world, surrounded by people who wanted to make us happy, and who, despite the kinds of daily trials you and I wouldn’t put up with for a second here in the U.S., live not just a happy life, but a rich one… even if they are not wealthy.

If you haven’t visited India (or the East), it’s tough to describe it to you. You either love it or hate it, that much I do believe; it’s very hard to remain ambivalent about it.

But the one thing that I can tell you, is that if you just stop, look and listen, you will come away with so much. So very much, much more than you ever thought you would.

Thinking about it, doesn’t that apply to getting the best out of life?

Us blogger types, typically as we end one year and start the next, we go through the “three words” exercise. Last year, my three words were attention, intention and retention. And despite – or maybe, because of – the roller coaster my life went through last year, I think I did pretty well by them. Particularly “attention” and “intention.”

This year, my words are stop, look, and listen.

Happy New Year, folks! What are your three words? Did you have any epiphany over the holidays? Did I miss out on anything? Let me know… because you know the comments are yours!