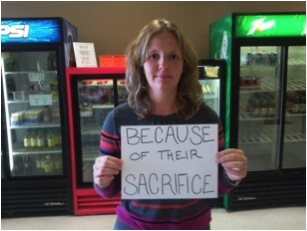 A Few Good Men is my favorite movie. I know it’s just a movie, but there’s a line in it by Demi Moore that comes to mind without fail around Veterans Day each year.

Kevin Pollack’s character asks Demi Moore why she likes the two marines they’re defending so much. Her response is one I always feel in my gut:

Because they stand up on a wall and say, “Nothing’s going to hurt you tonight, not on my watch.”

No matter what you think of the movie, the point is one that cannot be denied. That’s why working with our client, the VFW Foundation (VFWF), and our partners, Why We Celebrate, to Return the Favor to troops this November felt so right.

The VFWF has helped more than 1.5 million military families in the past year with financial assistance, free call days for soldiers overseas, and help with disability and benefit claims.

Why We Celebrate is an online, grassroots community started by Heather and Mike Whaling on Independence Day of this year to raises awareness about the sacrifices our troops make on a daily basis that allow us to celebrate holidays like the 4th of July.

We can never properly thank our troops and veterans for all they do to keep us safe. But we can take a few minutes to come together and say thank you.

Thank you for doing something I’m not sure that I could do.

Thank you for spending days, months and years away from your family so that I’m able to spend most days with mine.

Thank you for standing guard at night so I know everything is going to be ok.

Thank you for dealing with bombs and bullets while I write blog posts and business pitches.

Thank you for doing what you think is right and not asking for anything in return.

The VFW Foundation and Why We Celebrate hope you’ll join us in saying thank you to our troops this November. It’s a little gesture that we hope goes a long way and we’re quite certain they’ve earned it.

Here’s how you can help:

Share the campaign with your network and ask them to help Return the Favor to our troops.

Suggested Facebook post: Want to say thanks to our veterans and troops? Help support our troops and their families by returning the favor. Share your words of support through the @VFW Foundation’s thank you note wall to let our military members know their service is appreciated. http://tiny.cc/RTF2

Justin Goldsborough specializes in digital strategy and education at Fleishman-Hillard, Kansas City, and is in his fifth year on the Kansas City IABC board, where he serves as president for the 2010 board year. Justin is a huge Bon Jovi fan and once won third place in a karaoke contest at Chicago’s John Barleycorn’s with a rousing rendition of “Livin’ on a Prayer.” He’s also a diehard Kansas City Royals fan, so go easy when talking baseball.