When I Met, and Almost Lost, Mother Teresa 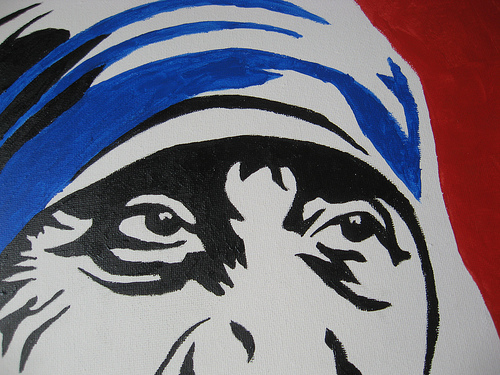 I don’t think you have to be a Roman Catholic (I’m not) to know when you’re in the presence of spiritual greatness. But that’s how I felt when I met Mother Teresa. A while later, I learned what it felt like to lose her, until I realized that I hadn’t, really.

At the time, I was still living in India. My mother’s older brother was based in Manila (he studied in, and then became the head of, the MBA program at the Asian Institute of Management). Christmas-time was when folks would come back for the holidays.

That year – I forget which exactly, but obviously it was before 1997 – my uncle returned from the holidays, bringing with him a bunch of donations to Mother Teresa’s Missionaries of Charities. He was tasked with delivering them, and bringing back receipts for his friends.

My parents’ home in Calcutta (Kolkata) is literally down the street from the MoC. So one day, off my uncle and I went to deliver the donations, and return with the receipts.

Arriving at MoC, we duly proffered the donations. When he asked for receipts, a nun told my uncle, “I don’t think you’ll be able to see Mother.”

“That’s all right,” he assured them. “I don’t have to see Mother, I just need receipts to take back to my friends.”

To this day I don’t know whether that registered with the nun in question. But she told us to wait and, after a short while, beckoned us to follow her. We assumed it was into the office to meet with the bursar and get the receipts.

Much to our surprise, it was not. We were ushered into a hallway and, who should we see approaching us in a wheelchair?

I can’t speak for my uncle, but I remember being extremely overwhelmed by the turn of events. I don’t remember whether Mother was being pushed, or was wheeling herself, though I think it was the former. I do recall very bright, crinkly, smiling eyes, and the feeling that this person in the wheelchair was vast.

Literally, as I type this, I remember a feeling of vastness emanating out of her body, accompanied by tremendous love.

She shook our hands, smiling all the while, and thanked us. I don’t know what we said… I mean, what do you say when you encounter a living saint, especially when you least expected to?!

She blessed us, giving each of us a kiss on the forehead (wow!). Then she gave each of us a small printout which had her photo on one side, and a prayer on the other. In addition, she gave us her “business card,” which had St. Francis’ Prayer printed on it.

I do remember her saying words to the effect, “Everyone has their business card, and this is my business card.”

We left the MoC a little dazed by what had happened to us. I think the very fact that you could never predict anything like this made it all the more precious. And from that day on, I carried both her novena and “business card” in my wallet, as a kind of talisman, I suppose.

Many years after, I’d moved to the U.S., and to the DC area. My first job on the East Coast was at Ruder Finn, and not long after I’d joined, one of the VPs took me out for a welcome lunch. Once we were seated at the restaurant, I slung my handbag over the back of my chair, as I was used to doing. The lunch and conversation were so pleasant that I thought little of it when I felt the person sitting behind me “shaking” my chair, as it were.

It was only when we’d finished lunch, and I reached for my handbag, that I realized it felt curiously light.

Yup. Whoever had been “shaking” my chair was actually picking my bag… and made off with my wallet… in which Mother’s prayer and “business card” were firmly ensconced.

For richer, for poorer

I don’t have to tell you how panicked I was. Of course, I started worrying about credit card theft (not that I had that many on me), but more than anything, I was devastated at the thought of losing Mother’s gifts. We raced up and down the streets, peering into trashcans as we went to see if we could find the wallet, but of course we couldn’t.

All I cared about getting back were Mother’s prayer and business card. Really. I even reported it to the cops, but though they were very nice, they didn’t find anything (how could they?).

My heart broke a little that day. It took me a while to recover. But as I did, I realized that while the thief was no richer – I rarely carry cash, and immediately froze all my credit cards – s/he would never be able to take the memory of meeting Mother away from me.

That kind of gift is something no one can ever take away.

We all have something, some memory, or experience, that enriches us. I’ve shared one of my most precious memories with you. Would you share one of yours?