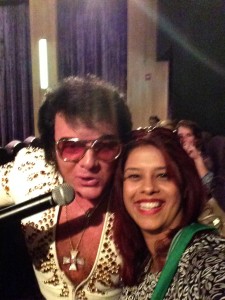 I’ve been in the South (or should that be The South?) for the last several days. It’s wonderful. I flew in and out of Birmingham, Ala., where I (finally) got to meet Ike Pigott and other Alabama friends, and then I headed to Tupelo, Miss., birthplace of You Know Who.

I also got my photo taken with You Know Who (I have proof!). I feel like I died and went to Heaven, because this is where it all began. This is the land that led to face of rock’n’roll changing forever.

The reason I’m here, though, isn’t just to pay to homage to Elvis (though that was what hooked me, when PRAM called). It’s to keynote the 2015 State Conference of the Public Relations Association of Mississippi. Wow!

It’s been an incredible last few days, despite a horrendous throat infection (fortunately I got antibiotics right before I left). Tell you what, these Tupelans (?) know how to show a gal a good time, not to mention give meaning to the word “community.” So if you’ve never been here, but have even a passing interest in music, I highly, highly recommend it.

Here are 12 PR tips from #PRAM2015 (which is not over yet, because I take the stage in an hour… so think good thoughts for me!).

Having a comprehensive emergency plan was key to preparedness, response and recovery for @myTupelo tornado response. #PRAM2015

Always consider your audiences. Graceland iPad tours include selfies for the younger gens and audio only for older gens. #PRAM2015

12. And quite possibly, my favorite, from Memphis Jones (who is a great performer, you should go see hi):

Have a great weekend, y’all. Y’all come back now, y’hear?