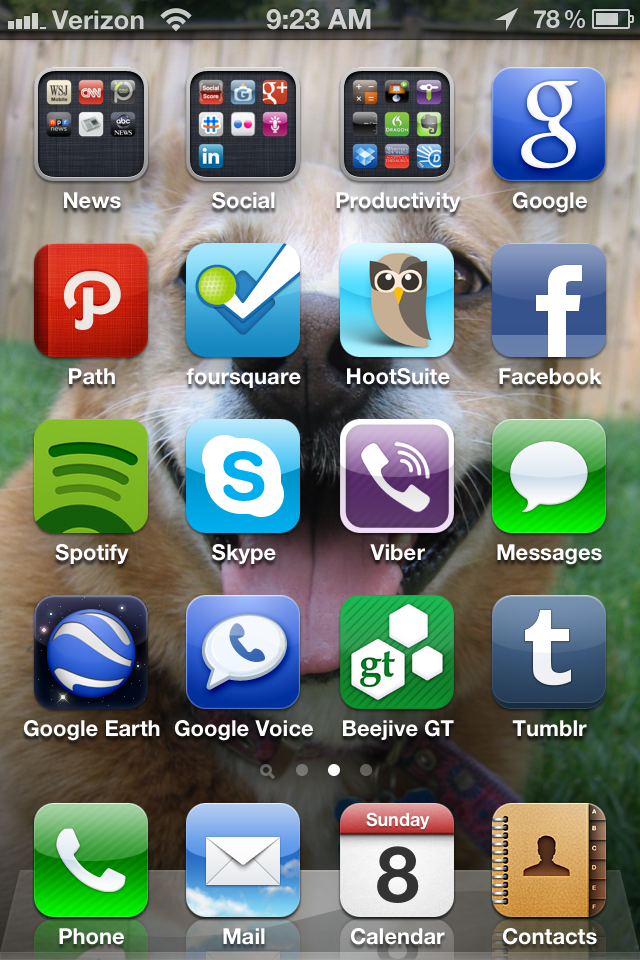 The other day, my brother sent me a message asking me what apps I was currently using on my iPhone. As I went down the list of my FUAs (Frequently Used Apps), I realized there are a lot that I simply assume everyone else is using… but maybe they’re not.

So I put together a list of my 15 top iPhone apps for you, in case you have been evaluating your own use of apps. Some of these might be new to you, some not, but either way, I hope you find the list helpful.

And this is only for the iPhone, though several are on my iPad as well (but that’s another post), and some of these can be used on Androids and BlackBerrys as well. Most of them are free; I’ll tell you when they’re not.

Skype has become the de facto way I communicate with my family and quite a few of my friends. It’s also how I’ve done interviews, and I suspect you do as well. The call quality is great, most of the time, at least, and you can’t beat the price of free.

This might be a new one for some of you. Viber is a terrific app (both for iPhone and Android), that lets you call other Viber users free. It’s really easy to set up, and once it syncs with your Contacts, it creates a separate list of people who have Viber installed as well.

So when you want to contact them, you can IM them (just as you would ordinarily), and/or call them. Viber uses your data plan, so if you don’t have unlimited texts that come with your plan, it’s a terrific option. It uses wi-fi or a 3G network to connect (so there may be charges if you use the latter) and the sound quality is incredible.

I learned of this app from Ray Richman, and I love it. It’s free. Google Talk basically lets you G-chat (as you would from your Gmail interface) on your phone.

Beejive has a bunch of other apps as well that I haven’t tested, but I do like this one a lot.

HootSuite has great apps for both the iPhone and iPad, so I have it set up on both. I like that I can use my multiple profiles even when I’m not at my computer, and most of its “regular” functionality is contained in its apps, such as scheduling tweets/posts, and so on.

Hot top: in HootSuite’s desktop version, specifically with Facebook, in addition to setting up profiles for your personal and business page (or pages you manage), you can also set up profiles for specific Facebook groups you participate in regularly.

I saw this a few weeks ago and it is a boon! 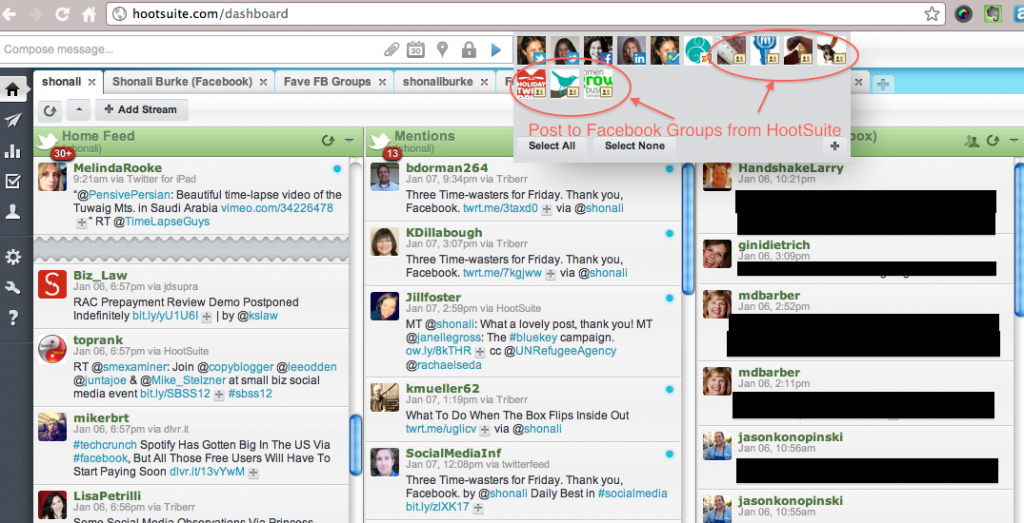 However, you can’t do this in/from the apps. I don’t think that’s such a big deal, and you’ve probably already seen that if you reset some profiles in your “main” HootSuite account, the apps won’t automatically sync them, you’ll have to do so manually. Again, not a big deal.

It wasn’t that long ago that Facebook introduced its own app (finally), and it works pretty well. Crashes at times, but what app doesn’t?

If you have the new Timeline, you’ll have noticed that it replicates on your mobile device as well, which is pretty nifty.

I set this up very recently after embarking on Project 366. I did so because the photos I take are almost always from my iPhone, so I wanted to see if I could post directly to Tumblr from my phone. And, of course, you already know you can.

When I was reading the app reviews, I saw a number of complaints, but so far at least, it’s been pretty easy to post to Tumblr from my iPhone, and that includes the caption, tags, short URL, etc.

I joined Path quite recently, and have been enjoying it. I don’t post very frequently, probably once or twice every few days, but since I’m keeping my network over there relatively small, I find it has a more intimate feeling.

And I still get a kick out of Path’s visualization if you tell it you’re going to sleep, or have woken up.

I learned about this from my trainer, Grant Hill. It is absolutely terrific! There’s a free version, but I bought the $0.99 Camera+ app, and it works beautifully. There are a ton of editing options, and you can also share your photos to social networks or via email directly from Camera+ if you want. I highly recommend it.

The $1.99 PhotoSync app is just… brilliant. Once you buy it, install it on your iPhone and computer (and I have it on my iPad as well, and no, I didn’t have to pay over).

What this does is let you wirelessly transfer photos, which is great – no more cables or emailing photos! You’ll need to make sure the app is open on each device you’re syncing from/to, and you have to enable location services (but I haven’t found that a problem). It works quickly and so far at least, I haven’t had a single problem.

In addition to photos, by the way, it transfers videos very well too. And, you can send photos to Flickr, Facebook, and a bunch of other sites if you want to.

I suppose I could (should?) have included this in the “social networks” category above, but I felt like mixing it up a bit.

It’s pretty easy to post your photos to Flickr using the app, though I find the tagging, etc., a bit laborious from the iPhone. Still, it does give you a way to create a Flickr album on the go, say, if you’re at a conference.

One of my goals this year is to do more video… using my iPhone. I’m getting more and more comfortable with iMovie, and purchased the $4.99 iMovie app a short while ago.

I’d taken this short video of my dog Lola meets Snoopy that plays “We Wish You a Merry Christmas” over the holidays. Since it was already on my phone, I did some quick editing via iMovie, transferred it to my computer via PhotoSync, and voila.

It’s pretty decent for quick editing, but it doesn’t have the full functionality of the regular iMovie. Still, for on-the-go stuff, it works.

I know the iPhone comes with a weather app, but I like the one from the Weather Channel better. And yes, it’s free.

This is just lovely. It’s a really cute $0.99 app that turns your weather forecast into a cute, animated doodle. Even on a rainy day, I’m pretty sure Weather Doodle will make you smile. And h/t to @sbc111, because of whom I found it.

If you like playing with different emoticons, this one’s for you. It’s free, and it gives you an astounding collection of emoticons, from a wide range of categories, that you can add to email, text messages, and so on.

However – only other iPhone/iPad users will be able to see them. Still worth a look, I think, and once you’ve downloaded Emojee Free! it will walk you through how to set it up.

I know, I know, I could have included a productivity category (and I actually have a folder on my iPhone for such apps), but outside of email, calendar, contacts, etc., they’re not FUAs. And this is a FUA post.

I’ve long been a fan of Tungle, and it finally introduced an app for the iPhone last year. It’s as easy to use Tungle’s iPhone app as it is to use the desktop version, and that’s not something you can say about all apps.

There you go. Fifteen apps for your iPhone (quite a few will work on your iPad as well), and most of them are free. Not a bad way to start your Monday, eh?

Do you have favorite apps that you use frequently? Do share, I’d love to learn!