Does Too Much Technology Make Us Bored? 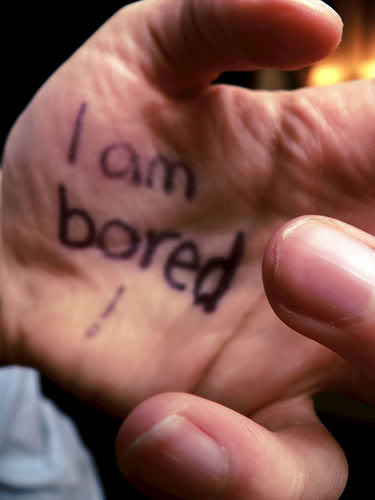 Last week I had to take my MacBook Pro in to the Apple store. (The screen’s been going blank at random intervals, and since it’s still under the protection plan, I decided to listen to my friends and get the pros to look at it. And in doing so, I experienced two very different attitudes to customer service, and technology, all in the same day.

Image by Emiichann (Own work) [Public domain], via Wikimedia Commons

Too cool for school

On my way out of the store, I hovered near the MacBook Airs (I don’t have one… yet…). I had a couple of questions so I asked one of the staff – a young woman who was probably in her early 20s – for help. Her voice said, “Sure,” but then she proceeded to make me feel as uncomfortable as I’ve ever felt in a retail outlet.

When I asked for information on the various Airs, she didn’t deign to answer, but pulled up the comps on the nearby iPad… and then did nothing. What if I’d had a visual impairment that didn’t allow me to read the information?

When I remarked that purchasing an external CD drive to load my (legal) version of Microsoft Office would probably be cheaper than purchasing the software again, she practically rolled her eyes as she told me the cost differential. The implication was that I was a loser for considering a less-expensive alternative (though maybe she was scoffing at me for wanting to use Office products).

When I asked what the average lifespan of the machines was, she said, “The technology will be obsolete by then, but you’re looking at ____.” Perhaps this is technically true (is it?), yet I don’t think evaluating how long I can use a machine that is an investment of $2K-$3K makes me stupid.

Perhaps my questions were basic or, in her opinion, stupid; but I was the (potential) customer, I should have been able to ask any questions I wanted without being made to feel that way. And it was an attitude I saw in many of the employees I encountered that day; most of them projected an air of enviable ennui. I managed to bite my lips so as not to say anything snarky, but I literally walked out of the store shaking my head.

After I left the Apple store, I walked across to a different part of the mall, to a little wine and beer store in anticipation of that evening’s wine o’clock. I happened to be on the phone with Lisa Gerber at the same time (with my headphones in), so she will attest to this next bit.

Once I was ready to pay, the cashier rang me up, a young Indian immigrant (I’ve seen him before, and my husband has had the odd conversation with him). As I handed him my credit card, I noticed that instead of running it through the usual machine, he’d pulled out his iPad and was using Square.

Square! How cool! So as I thanked him, I congratulated him on doing so, and asked him how he was liking it. He started raving about it, how he’d been using it for about two months, how it was making business so much more efficient…

I couldn’t help but smile; he reminded me of the time I met Rick Henry. So excited by what technology could do for him and his business, and really using it for its intended purpose – to make life better.

Technology, for better or worse

I couldn’t help but contrast the two experiences, both on the same day, both literally very close to each other.

On the one hand, there was a twenty-something young woman, surrounded by some of the most expensive technological toys on the planet, yet she showed no interest or enthusiasm for making anyone’s life better. Neither did most of the Apple staff I encountered that day, as I noted earlier. On the other, there was a young, twenty-something young man, someone who probably didn’t grow up with tech tools at his disposal, but who was visibly excited by the wonders of technology for very real reasons.

I haven’t been able to stop thinking about the difference in the two. I don’t think I can write it off to generational differences; I’m pretty sure they were at least of the same generation, if not around the same age. Maybe the wine store cashier is the owner of his business, making him more vested than the Apple store staffer(s)? Cultural differences, maybe? Maybe one grew up taking technology for granted, and the other may not have?

I’m bored too, at times. I don’t think any of us can truthfully say there are not times we’re malcontent, or dissatisfied with what we do (then something happens that makes us realize we are very lucky to be where we are, and we straighten up, until the next time we get bored… and then it happens all over again).

To me that is a frightening state to be in. And if that’s what too much technology does to us – and yes, I keep coming back to the technology, because that was what was in common, yet they had vastly different reactions to and about it – then it’s time to take a step back.