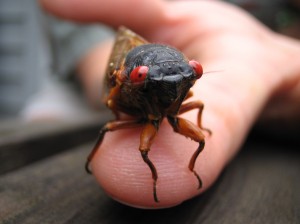 The first time I experienced “cicada mania” was in 2004.

We’d just moved to the East Coast and were getting used to living and working in the DC area. And in all the advice people had to give us about our Eastward move, somehow they forgot to tell us that every few years, we’d feel like extras on the set of a B-grade thriller from the 50s.

At least, that’s how I felt when I opened my front door one summer’s day that year. Unsuspecting as to the horrors that awaited outside, I literally screamed and jumped back inside the house when I saw every visible surface covered with the brown things. And I do mean Every. Single. Surface. That. Was. Visible. From the door frame, to the stoop, to the walkway…

In my memory, that period lasted forever. Which, of course, it didn’t, but for the time, it seemed cicadas ruled our lives.

The Washington Post published cicada recipes with relish [sic]. I started carrying an umbrella to try and keep them off my head whenever I went out (I think one got into my hair one time; I was not pleased). Our dogs gorged on them with delight every time they went out in the yard; sometimes they’d even have cicada bits sticking out of their mouths. It was disgusting.

That was Brood X, apparently. This year, Brood II – one of the types of 17 year cicadas – is slated to emerge from the nether regions and terrorize us all for several weeks, if not literally, then with the excruciatingly loud chirping we won’t be able to get away from.

My husband tells me that our particular area may get spared; I haven’t as yet found anything online that supports that assertion, yet still, one can hope.

If you’re looking for PR inspiration, though, the periodical cicadas should give it to you in droves.

To start (and end) with, it’s all about sex. They emerge from their years-long hibernation only to procreate. To make matters more interesting, they die as soon as they’ve done so. Then their offspring bury themselves, emerge 17 years later, and do it all, all over again.

Tip: Sex makes for a great story. Always. Just be smart and keep your stories SFW (safe for work) and relevant; without the sex angle, the periodical cicadas wouldn’t be a story. That means, if it’s not relevant, don’t try to make it so!

If these cicadas emerged in less-than-pestilential numbers, no one would pay attention to them. As a matter of fact, they do, every year, and we don’t. But these particular broods clearly know there is strength in numbers (one of the reasons they are thought to emerge so dramatically ever so often, to avoid predators chomping down enough of them so as to eat them into extinction). And enough of us are affected by them so as to pay attention.

Tip: a movement rarely comprises just one, or a few, people. And it’s rarely attention-worthy until it’s something huge numbers of us can get up in arms about.

Ever since scientists and naturalists and all the other -ists have been able to track periodical cicadas, they’ve been trying to explain why this happens. Explanations range from them possibly being a food source (so that’s your “cycle of life” angle), to playing a part in soil ecology (that’s your “Inconvenient Truth” angle), to natural tree pruning (that’s your botany angle). What they all have in common is somehow making a difference, usually positively, to life as we know it.

Tip: if your story has a cast of characters and/or plot that makes a real difference to life as we know it, you probably have a winner on your hands.

I dare you to find an article, or blog post, or TV story, about Brood II (or X, or any brood) that doesn’t mention their “bulging red eyes.” The cicadas’ emergence would still be noteworthy even if they weren’t, er, “arresting” in their appearance, but the fact that they are really makes people stop and pay attention to them.

Tip: appearances do matter, and sometimes first impressions can mean the difference between your story being picked up, or at least being shortlisted for further review, and not.

5. Good stories have angles, and legs

Look at the way the media are going crazy over the cicadas. I talked about how I remembered cicada recipes from the last time we had such an invasion, and this year is no different (though please note the P.S. on their mercury levels). If you feel like playing detective, well, this one’s for you courtesy Radiolab and WNYC. The National Geographic-sponsored Magicicada.org is going strong, and will likely continue to do so, as has been, and will, CicadaMania.com.

Tip: does your story have several different angles? Does it have enough “there” there to be sustained over time?

As I said earlier, I’m not particularly enamored of these little beasties, but that doesn’t stop me from appreciating what they can teach us. I’m sure there are several PR (and, perhaps, other) lessons I haven’t even touched on yet… what do you think we can learn from them? Do share your thoughts… and if you’ve experienced the magicicadas in the past, what did you think? Are you looking forward to the 2013 visitation?

As for me, I’d better put my hammock away until the creatures have crawled back into the ground. Maybe then I can enjoy the rest of the summer.