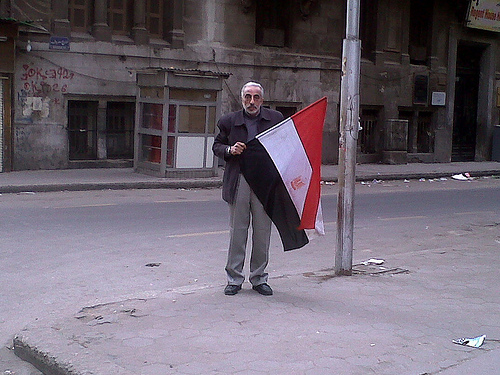 It’s taken me a while to try to get up to speed with what’s going on in Egypt, because I’ve been mostly offline the last few days.

It’s frightening yet fascinating at the same time.

Interestingly, while the news is all over it, I found very few blog posts that I thought worth sharing – else that’s what yesterday’s weekly roundup would have focused on.

I did find the following:

1. An old friend of mine (and now a fast-rising filmmaker), Parvez Sharma, has been relentlessly live-tweeting the events, as well as conducting interviews with folks in Egypt. Some of his pieces have been featured on the Huffington Post, and he featured prominently in a CNN article a few days ago.

(I found this out through Facebook, where I saw his stream full of Egypt and #Jan25 related tweets. Didn’t even know he was on Twitter before then.)

I’m hoping to be able to talk with him soon, but if you are interested, check out his blog for more of his thoughts.

2. Al Jazeera seems to be doing a remarkable job of covering the revolution. This is their “Anger in Egypt” page, and you can find their live-stream from there, even though its Cairo bureau was shut down a couple of days ago.

3. Shel Israel had a piece the other day on what he calls braided journalism, or the increasingly-frequent practice of mainstream media crowd- and social media-sourcing.

Or, as he says, “It is the idea that professional and citizen journalists will merge resources to provide broader and deeper coverage of events in the world, particularly during crises such as earthquake, fire, plane crash or in this morning’s example. Street revolution.”

4. A very interesting piece on Horses for Sources on whether the crisis might threaten global outsourcing.

I do believe that people are agents of change.

But when what is happening in Egypt right now drew in large part from organization on Facebook and online promotion, can we really say with absolute confidence that the revolution will not be tweeted?

“… most Western self-professed Islam/Middle East and other assorted pundits have no clue about the harsh reality of Egyptian life.

“Many have probably never taken a walk down Manshiyat Nasser, the largest slum in Cairo. This is why they do not realize that this ‘revolution’ is not about social networking and its success. The majority of the 80 million people of Egypt live in abject poverty. They do not even have cell-phones let alone smartphones like the iPhone or the Droid. They go to kiosks to make calls.

A pretty substantial number of them have NEVER used the internet and do not have email accounts: the complicated mechanisms of self-promotion and information gathering and sharing on social networks is not a part of their lives – they have never had the money or the resources to get access to this other world that often lives in the relatively more affluent neighborhoods like Zamalek or Garden City or Mohandaseen – all within some walking distance of where the dissent started in Tahrir Square.

“The majority of the protesters in Cairo, in Suez, in Alexandria, in Luxor, in Mahla, in Manoura, and all over this ancient land that is the very heart of what it means to be Arab, are not “twittering” or “Facebooking” or “emailing” or even watching the landmark live coverage that Al-Jazeera is providing. They are out on the streets – and yes, without phone access – risking their lives and giving vent to three decades, and perhaps more, of anger.

I completely agree that this revolution – for revolution it is, whatever the outcome – is not about whether “Twitter toppled Mubarak” or whatever cutesy headline the media are bound to come up with.

(And you just know they’re going to pick on Twitter, since most of them, IMHO, still haven’t come to grips with it.)

It is, as Parvez says, about human rights. The kind of rights that you and I enjoy to the point of taking for granted.

And if the underlying issues don’t resonate strongly with enough people who are directly affected by them, there will be no revolution to begin with.

But would all this attention and support be possible quite as speedily without the hyper-connected world that social networks give us?

I don’t think so.

If social media is changing anything in our world

it’s precisely this: that we are – or can be – so connected, hyper-connected and inter-connected, that those connections, even if they are not particularly strong to begin with, can generate enough momentum to effect actual, real change.

Change that improves our life in visible, meaningful ways.

If you take it literally

of course “the revolution” will not be tweeted. Because it takes real people to do that. Even as those in power do their utmost to curb their methods of communication.

But movements spread because of the information sources available coupled with the passion of those involved in and spreading it, which often forces the “media” to take notice of events they might otherwise ignore.

Like it or not, social media has become one of these information sources and, more importantly, can propel momentum that mainstream media often cannot.

Yes, we have to take our online connections offline – this is something I say frequently (to the point where I probably bore you). Because that’s where the real relationships are.

But social can be a great way of starting those connections.

My point is: why does it have to be “either/or”? Can it not be both?