How The UK’s NHS Broke Into Social Media

Over the past month, much like the many months before it, I have been listening to and absorbing a wide variety of stories on social media and how various brands are using it – for better or worse – to reach out to new audiences.

I happened to be browsing one of the UK’s preeminent social media news outlets (and a personal favorite of mine for breaking stories in the world of social media and business) – Reputation Online – when I came across a story that struck a chord with me.

The story focused on the first-ever “Twitter-view” to be conducted with the NHS Salford’s Head of Communications, Karl Brookes, by Reputation Online’s editor Vikki Chowney (pictured above).

Now, for any North American readers out there who may be unfamiliar with the NHS, it’s the UK’s National Health Service, which is completely publicly funded.

That means that any resident of the UK can basically receive a vast majority of medical care for free. Sounds pretty good, right?

As you can probably guess, the NHS is at the mercy of successive governments in terms of ongoing funding levels, often publicly criticized for lack of available resources, and always under scrutiny (especially when it comes to any form of external communications efforts) as to where the public funding that is available is going.

However, this is what makes this – their first-ever (and pretty darn brave if you ask me) foray into the world of social media – just too darn interesting to pass up.

I was lucky enough to sit down with Reputation Online editor, prolific music blogger, social media expert and all round “digital native” Vikki Chowney, and ask her a few questions on what makes this such a different, interesting and ongoing social media initiative.

As the editor of RO, what makes the NHS’ adoption of Social Media a unique story when compared to other Government entities?

Well first of all, the fact that they are actually using social media properly.

They have not just set up a Twitter account and Facebook page for the sake of it, but are using these channels to engage both stakeholders and members of the public alike and keeping everything updated regularly. 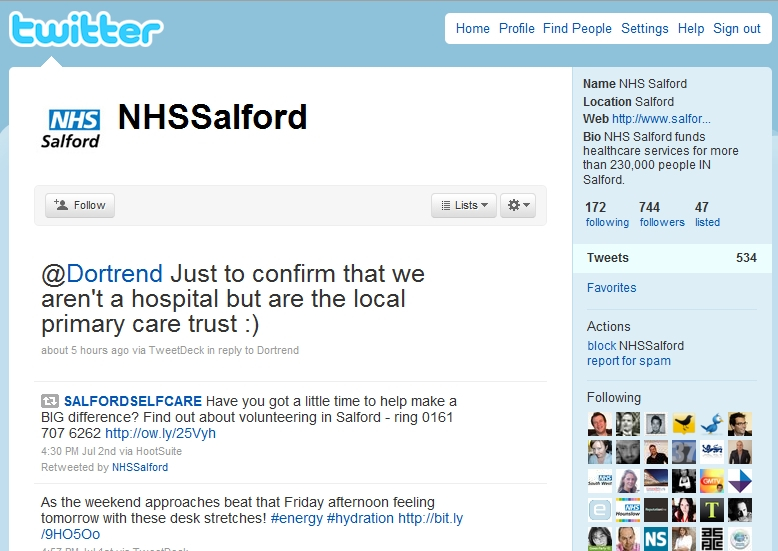 Secondly, they are proactively talking about it and encouraging people to get involved. And finally, they have done their research.

In an earlier article, prior to the Twitter interview, the NHS Salford contacted us about a survey they had done showing only a third (36%) of the 148 Primary Care Trusts (PCTs) in England were found to be active on Facebook, and 28% on Twitter.

However, during the interview, it also emerged that they had also found that 20+% of residents were asking that they communicate with them electronically which was the driving force behind it all.

What did you find to be the main points of interest to emerge from the “Twitter-view”?

Well, following on from the NHS’ initial research, I was fascinated to learn that not only was this an organically generated and implemented idea from NHS staffers in the first place, but that they are staffing it entirely with an internal team rota, based on existing resources (with those that are more keen tending to chip in), with a focus on leveraging a lot of the good work that the NHS does that often goes unnoticed.

This is particularly pertinent because, traditionally for any publicly-funded government entity, any kind of external pro-active communications work has been frowned upon due to the inevitable public demands to know where the money is coming from.

By internally generating this idea and implementing it, they have found a way to pro-actively open themselves up to, and engage with, a wide variety of stakeholders without requiring any extra funding or agency fees etc.

What’s more, if the interview is anything to go by, it’s working. We expected to only have a few digital industry people taking part over the course of the hour, but ended up with a headcount of 262 tweets from 66 participants.

I was also struck by how well thought-out all the questions were, which to me shows some very promising early signs of real engagement with a growing target audience.

This is no doubt a progressive move for the NHS. But as the publicly-funded national health care provider for the UK, it regularly deals with issues around (limited) funding from the government and criticism from the public for limited resources/availability of those resources.

What are your thoughts on whether this will open up the NHS to a veritable “Pandora’s Box” of public complaints about day-to-day issues? And, if so, how would you see the NHS handling such a situation?

At the beginning of the interview we did have a few negative tweets about both the editorial credibility of the interview and, of course, where the money was coming from to pay for this social media push.

However, I was impressed with the professionalism shown by Karl when dealing with these, and in the end we were actually able to bring a few participants around – but again this was a direct result of them doing their research and knowing how to implement properly within the constraints of being a government entity.

I think that the NHS will definitely open themselves up to public complaints about lots of the day-to-day stuff with this.

If there is one thing that we’ve learned here it is that if you reach out to people and offer them something of value they will respond.

I personally received some criticism from readers about why the interview was conducted on Twitter, which some thought only appealed to a niche community. But if we go back to the point about offering value, it is important to remember that with SM the NHS can deal with any complaint one-on-one, but it’s also public, so that information has the potential to benefit many.

One of Karl’s responses that really stood out to me during the interview was that, “There are always reasons for not doing something, but true innovation occurs when people have the courage to try these things,” and “The #NHS should always be communicating via forums that people use. We should be where the audience is.”

You mentioned an article earlier on the “low uptake of social media within the 148 PCTs in England.” Do you think this initiative is a) sustainable and b) will see increased usage across the entire NHS in future?

I think that with any social media initiative, you have to start somewhere. The fact that an organization like the NHS has an internal “Just Do It” attitude to this is certainly encouraging.

Since the interview I have been told that a number of NHS bodies have since stepped forward to support the roll-out and I am hoping that articles like ours and yours will get people talking.

Aside from that, time will tell, but I will definitely be keen to see where it goes from here.

If you’ve been reading this: what do you think about this initiative? Do you think social media is the right forum for bodies like the NHS?

Do you think it’s sustainable? Could you see, or do you know of, any other health care bodies adopting a similar approach around the world? Please do share your thoughts.

Bryce Keane is an international communications professional with experience managing a wide variety of communications campaigns in both the EMEA and Asia-Pacific regions. Originally from Melbourne, he now works in London as an Account Manager for Mulberry Marketing Communications. His experience includes devising and executing local, national and regional campaigns across a variety of industries, from Agri-Business, to Government, to Corporate Social Responsibility and Technology. He has a keen interest in exploring issues that affect the global communications industry, and is always interested in hearing from other communications professionals with thoughts, feedback or just for a chat. You can reach him on LinkedIn or Twitter.