Yesterday Mark Schaefer published a terrific post on how to pluck up the courage to blog with confidence. As I commented on the post, I recalled how I felt every one of the emotions he described (I’m too scared!, how much time will it take?, who will read it?, etc.) and then some, before I got my started on my blogging journey.

And I also recalled how I might never have actually started that journey had it not been for Kami Huyse asking me to guest blog for her back in 2008.

This was before WUL. I was still transitioning into “life after the ASPCA” and tentatively feeling my way back to my own life. I’d met Kami the previous year, at IPR‘s annual measurement summit (coincidentally, the first time and same place I also met Shel Israel, because Katie Paine insisted I needed to know both of them). We’d stayed in touch, and met up again in 2008 at that year’s PRSA International Conference.

That particular conference saw many firsts. My first time presenting on such a large stage (literally, I co-presented with Katie in a humungous ballroom), my first tweetup, and my first time meeting people like Shannon Paul, Lee Odden, Zoe Siskos, Lauren Vargas, and many, many others I still respect and have since come to know better and be privileged enough to call “friend.”

I just realized you might think I’m name-dropping. That is not my intention. Rather, it’s to share how intimidated I was by this new world inhabited by “social media people.” Many of them had been blogging for years, and weren’t shy of telling you so. No, not the folks I mentioned above, nor several others; but there were certainly some gems who so closely identified  with “who they were” online, they scared me practically to death.

One moment in time

One of the moments I remember vividly from PRSA 2008 was when we were introducing ourselves at the tweetup. Kami had organized it, I think in conjunction with PRSA but I’m not sure. She thought it was going to be a relatively small event, but it grew and grew and grew until we moved from one table to an entire back room at the restaurant.

And then came my turn. As I watched and listened, I kept trying to think of how best to put this: I was a nobody. I didn’t have a fancy job title (any more), I didn’t work at a big organization (any more) and I certainly didn’t have a blog!

Well, when it was my turn, I said, somewhat shakily, “Hi, I’m @shonali on Twitter, I just left for the ASPCA and am in between jobs, and I don’t have a blog.” Or words to that effect, I don’t remember exactly; but that was the gist of it.

Someone – I don’t remember who, I wish I did (all I remember is that it was a guy) said, “Then why are you here?”

I was so taken aback that I didn’t know what to say. Katie, Kami and Michelle Hinson (who was IPR’s director of development for years, and still working there at the time), on the other hand, did. They leaped to my defense and said in unison, almost as if they’d rehearsed it a million times, “Because she’s AWESOME!”

I was so touched. These metaphorical Amazons of the PR, social media and measurement universe thought I was good enough to sit among them … and had no problem proclaiming that to the world. I’ll never forget it.

So when Kami asked me if I’d write a guest post for her, there was no way I’d say “no.” I agonized over what to write, how to write, how much to write, how little to write, how not to write, what not to say… until finally I couldn’t agonize any more and sent it in to Lauren (Vargas), who was helping her edit her blog at the time.

I was so nervous about whether they’d like it or not. I must have asked Lauren 20 questions about when it would run, how commenting would work, what I should look out for… and she answered every single one of them patiently.

When the post finally ran (as I re-read it today, it’s still pretty decent; though I’m not sure what happened to the comments, maybe they got blitzed when Kami switched her blog from Feedburner to Feedblitz? I don’t know) I was so proud. 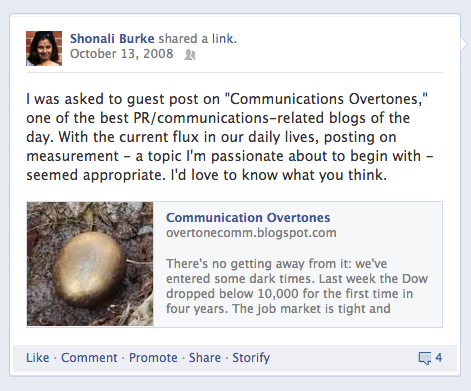 SO proud! I emailed it around, shared it on Facebook, asked people to comment (even via DM, and some did not like that!)… I might as well have been showing off my new puppy.

A few months later, WUL emerged in January of 2009. Since then, it has sailed some choppy seas and, I don’t doubt, will sail them again, but it’s still around. I’ve been high, I’ve been low, I’ve ranted, I’ve reasoned, I’ve shared and cried, I’ve done it all on this blog.

Along the way one guest blogger started walking with me, then another, then another. I’ve tried to build up a guest blogging team, in part because that’s how I got my start blogging and want to pay it forward; in part because I think there are some stellar voices that need to be heard, and I’m doing my bit to help them. And I continue to guest blog whenever I can, because it’s just such a terrific thing to do, to stretch one’s writing and creative muscles.

And all the while, people like you made WUL into what it is – whatever it is – through your encouragement, your visits, your comments, your emails, your DMs. Just by being here, by showing up, by sharing, by caring.

None of this would have happened if Kami hadn’t given me that one gentle push. To just write. When I wasn’t confident in myself, she was.

And while I still don’t think I’m a “great” blogger, I do have more confidence to say what I think. Or, sometimes, not say anything at all. But I know where I’ll do it.

So if you are walking that same road right now – that road that I’ve walked, and that Mark and Kami walked before me, and Katie did before all of us – and are trying to figure out who will care, what you’ll write, who you’ll write for, what you’ll say…

Stop worrying so much. And just write.

We’re here for you.

Now that I’ve gone all Bill Dorman on you… or maybe all JackB… please. Just write.