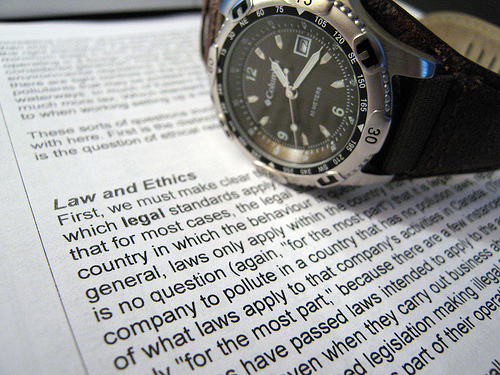 Public relations and ethics have always had an uneasy relationship.

Whether it was PT Barnum’s questionable methods or simply the perception in society that we’re money grubbing, fast-talking glorified salespeople with a casual relationship with the truth, the fact remains that, in many minds, our relationship with ethics is at best, on-again-off-again.

As the industry grew, we developed codes of ethics and have widely stuck with them since.

But the advent of the Internet brought along with it many challenges that the generations preceding mine have widely ignored.

It seems that – at least in this part of the world – our industry bodies and their respective codes of ethics are becoming ineffective, if not wholly redundant in many areas.

The area that most requires updating, and desperately so, is unsurprisingly the online world. Most notably: blogs.

Blogs, whether we like it or not, are playing an increasingly large part in the media cycle.

Many command as much respect and weight as traditional media entities.

Yet they aren’t held to the same rigorous standards as traditional media outlets, especially when it comes to the influence of PR on their writings.

For those who have clients in the travel industry, we know that if a journalist is sent as a media representative to a destination, we will undoubtedly see “xx journalist travelled at the expense of yy travel company” in the resulting article.

That’s a given, and allows the general public to see that the journalist might have received some preferential treatment and in many cases, ate and drank like a king without dipping into their own pocket.

But we don’t see it in blogs.

An old friend of mine from university recently did a study on sponsored conversations in social media.

She found that 65 per cent of bloggers said that they had participated in some form of online sponsored conversation.

That’s people like you and I paying them to start a topic or providing them with something for free to test. And on some of these blogs, it’s horrendously obvious that they’ll do anything for a quick buck or for free stuff.

But it’s not such blogs that bother me. What bothers me are the more insidious blogs where the sponsoring is less obvious, and the audience extremely large.

While there is a defence being mounted for sponsored posts, they still suggest disclosure.

The blogosphere has been crying foul at traditional media houses for not recognizing them as a valid contributor to public discourse, but many are reluctant to adopt a code of ethics that might reveal them to be just as “evil” as the media houses they claim to buck against.

Our job, especially when it comes to the media, is to inform and be transparent, not to manipulate and spin (regardless of how society might perceive us).

Picking and choosing blogs that don’t explicitly say that they’re paid content is as ethical as an under-the-table deal.

I’m the first one to say that there are ethical shades of grey in every situation, but if the blogs want to play with the big boys of traditional media, surely they should play by the big boys’ rules and disclose when they’re being paid.

This isn’t so much an opinion piece as a discussion-starter. Please let me know what you think; as for me, I think there’s another blog post somewhere in this topic, or perhaps a few hundred…

Mike Doman is an Account Executive at Mulberry Marketing Communications in Melbourne, Australia. In between media calls and writing press releases, he does the occasional guest lecture for RMIT and has guest-written for Australian publications including The National Times and Crikey.com.au, along with publishing his own (non-PR) blog, Sporadically Pensive. He has also sat on the admissions panel for RMIT’s Bachelor of Communication (Public Relations) and tweets about everything from Masterchef to media relations.