What I’m Grateful For This Christmas 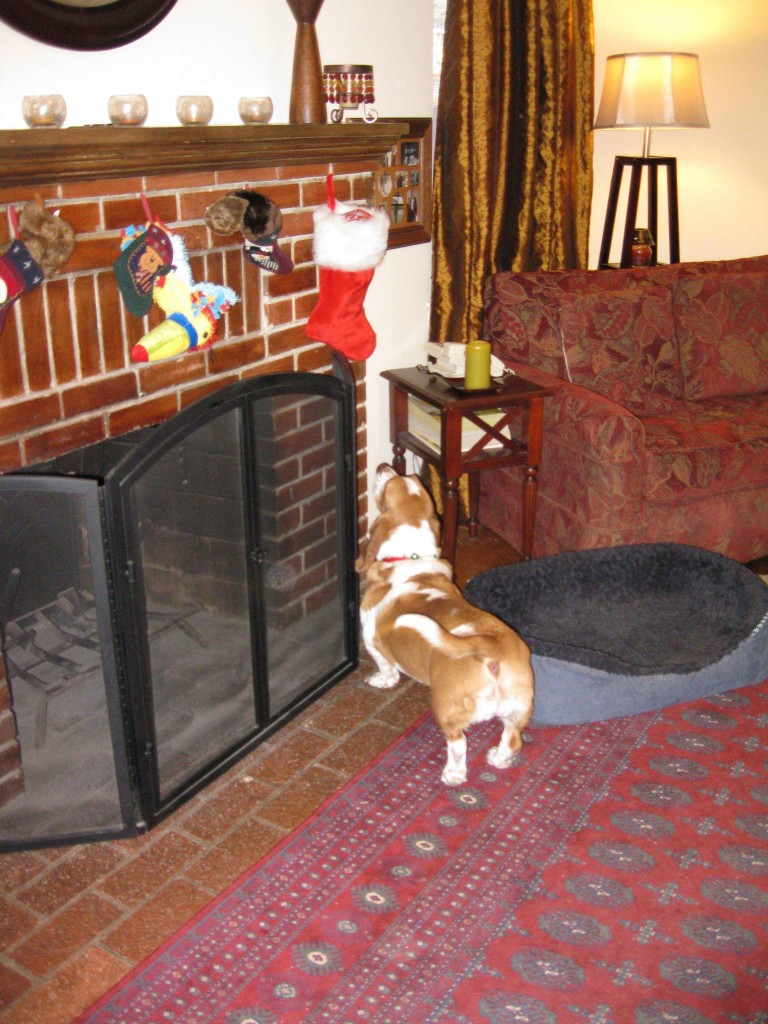 Its premise is intrinsically religious, its rituals are somewhat pagan, and its marketing has been indelibly impacted by one of the world’s most famous brands.

One thing we’ll all agree on, though, is that when we talk about the “Christmas spirit,” we mean giving, sharing, loving, laughing.

The Christmas spirit evokes a sense of wonder, a sense of delight… and gratitude that someone went out of their way to make this day special for us.

When my mind wanders through the rooms of my past, some favorite Christmas memories stand out.

One of our family’s traditions, when we were growing up, was for “Santa” to visit our home on Christmas Eve and dole out the presents that had somehow miraculously appeared underneath the Christmas tree.

This was always preceded by the house lights being turned off, the Christmas tree (always a real one) glowing, and the lusty singing of carols led by my father, since (he explained) how else would Santa know where our house was?

One year – I must have been about 15 or 16 – a much younger cousin was visiting for Christmas.

The product of a divorced home, he was not raised in the Christian tradition, much less believing in the mythology.

Since our family was the one that “did” Christmas every year, he came over, with his dad, on Christmas Eve.

I remember a little boy, shy of spirit, somewhat overwhelmed by “the cousins” and the family he didn’t really know.

And somewhat suspicious that Santa was really coming.

When the time came, we switched off the lights, began singing carols, and waited.

Suddenly, a bell started ringing and, as if on cue, our dogs started barking.

Before we knew it, “Mrs. Santa” was trudging up the stairs, most jovial yet gentle, and we all squealed with delight.

(Strangely enough, my mom was nowhere around to share in the glee. She must have been brushing her teeth).

And a little boy’s eyes widened in amazement, a delighted smile crept across his face, accepting, without question, that Santa was dealing with Rudolph issues as he received his gifts with gratitude mixed with awe.

When we were kids, the deal was that the family would get together at our home on Christmas Eve.

Gifts would be piled under the tree, and then the grown-ups would settle down with their adult beverages, us kids with whatever it was that we were allowed to drink, and then we’d start singing.

My father, who’d never had any formal training on the piano, would pound away on the ivories – tickling was never his style – as everyone belted out their favorites.

Then, after a while, I would take over (I did take lessons), and the merriment would continue.

When it was all done, the troops would go home, and we’d go to bed, to wake up early for church the next day. (When we were all – and that means my sister, brother and I – a little older, we graduated to Midnight Mass, but not when we were “kids.”)

I distinctly remember how, when we’d go to church on Christmas Day, my father’s would be one of the loudest voices in the congregation.

What is especially memorable is that when the notes got too high, he would switch octaves without missing a beat.

One year, it gave my sister and I such a fit of the giggles it was all we could do to keep standing.

I hasten to add that this by no means implies my dad can’t sing. He actually has a great voice.

So while it’s a bit of a smile-inducing memory, what stands out to me most is the complete and utter enchantment he had with these songs.

I’m grateful for a father who reminds me how a pure heart retains the child’s sense of wonder, no matter how many years go by.

When I was at the end of my teens – probably 18 or 19, I can’t remember exactly, but somewhere around then – I had my heart set on a white dress.

This might sound silly to you, but in those days, Calcutta, excuse me, Kolkata, was not exactly the Mecca of designer duds.

I’m not sure where I picked up my taste – possibly from my mom’s fashion mags – but I’d seen a dress in a boutique window.

Oh, what a dress!

It was made of some shiny, silky fabric – probably with elements of jersey – and it was E.L.E.G.A.N.T.

Slightly-padded shoulders (hey, we’re talking about the ’80s here!), a V-neck but most importantly, gathered at the left waist with an asymmetrical skirt… which meant that my then-comely legs (true, and actually they’re still not too bad) would be beautifully showcased as the folds felt gently away from the cinched waist.

It made me think of Greek goddesses. So obviously, by extension, I would be a Greek goddess if I could only get that dress.

The problem was that it wasn’t cheap.

Now, my family wasn’t exactly poor, but we weren’t brought up to expect expensive things, much less demand them.

Still, my mom could see how desperately I wanted this dress.

And wonder of wonders, I got it for Christmas that year.

Needless to say, it was a treasured possession for many years. I remember wearing it to the New Year’s Eve party of the year and yes, heads did turn.

(Possibly because it wasn’t the typical outfit for a wholesome Bengali teenager to wear, but I’d prefer to think it was because of the Greek Goddess-esque qualities I magically acquired by donning that dress.)

I’m grateful for a mother who let a young girl’s dream take flight. 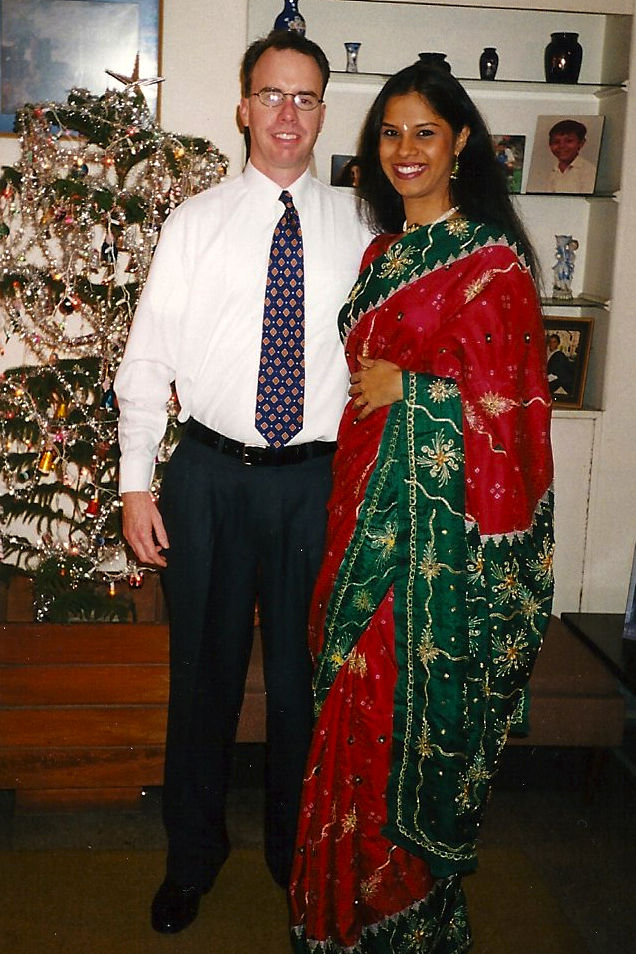 Our time together, over the wedding and honeymoon, was all too brief, especially if you consider that we met online (yes, it’s true, and that’s a whole other post) while two continents apart and had only three weeks of “real” time together … over our nuptials.

Once our brief honeymoon was over, my husband returned to the US, to get back to work and file my papers for lawful entry into the country.

Not just because I was a good Indian wife, but because really, I had no other choice.

I don’t know how it is now, but 11-odd years ago, there was no saying how long immigration papers – spousal or not – would take to be processed.

Note to anyone in a similar situation: do not, by any means, listen to well-meaning relatives and friends who insist on telling you stories of how so-and-so’s cousin’s nephew’s daughter was STILL WAITING FOR HER PAPERS AFTER 11 YEARS.

I mean, seriously, what kind of person does that?!

But anyway. There I was in Cal Kolkata, trying to wait patiently.

Here my husband was, doing anything he could to move the process along, all the time calling me to comfort and reassure me that yes, Virginia, it would happen.

But there we were, with Christmas approaching, and no news from the friggin Embassy.

Over and above everything else, here I was, a newlywed, and I wouldn’t be with my husband for Christmas!

I was trying to reconcile myself to spending this first Christmas apart from my husband when, just days before Christmas, he called to tell me he’d managed to finagle a few days of vacation time and would be able to spend Christmas in India.

Can you say, “Rejoice, heavens, rejoice”? 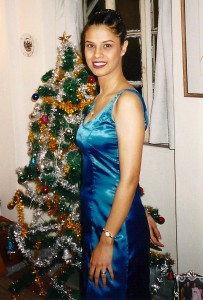 And we even had New Year’s together. Which was pretty hawt (see pic at left).

Um-hmm. Or, as my husband would say, that’s what I’m talkin’ about.

I’m grateful for a husband who lifted my spirits when I needed it most.

In 2003, my husband and I decided that we’d had enough of living in a huge, beautiful but oh-so-far-from-the-City home in the San Francisco Bay Area.

Neither of us had roots in NoCal (he’s from SoCal and you know where I’m from).

So that summer, we decided to move to DC; after all, he’d transitioned from the Air Force to the private sector and back to government service with the State of California, and was ready for a move from State to Fed.

So he started job-hunting, and I started networking.

The plan was that he’d get a job with the feds and move here, while I stayed behind to finish up work (I was running my own business by then, just as I am now), sell the house, and take care of moving with the dogs and our worldly possessions.

What do you know, the plan worked.

He got the job.

We flew to DC to suss out rental homes (we didn’t want to buy immediately), and found one that would take us and our dogs (very important!), signed a lease and were all set for the big move.

We were probably apart for not more than a couple of months, if that, but it felt like a lifetime (though I should have been well-steeled by the ’99 experience).

Our goal was to celebrate Christmas of 2003 in DC – and we made it happen.

My husband picked me up at the airport, and we waited for the dogs to come out of cargo (I hated having to put them in there, but what was the alternative?), which they did, safely and with nary a scratch.

And then he drove us home.

Since our furniture was en route, I wasn’t expecting much.

I did know that there was a bed and a microwave, since we’d purchased them on our previous recce.

But when we drove up to the house, a smile broke out all over my body when I saw the lighted and decorated Christmas tree through the window.

You see, I love Christmas trees. LOVE them.

So once my husband knew when we were expected, off he went to buy a tree, and set it up so that that it would be the first thing I saw when I came home.

And that’s how we celebrated our first Christmas in the nation’s capital.

In a house empty save for a bed, a microwave, a card table and two chairs… and a Christmas tree, a lighted fire and a whole lot of love.

I’m grateful for a husband who reminds me, not just by word but by deed, that Christmas is not about what you have, but who you’re with.

I wish you peace, love and joy.

I wish you full hearts and stomachs, with the occasional Pepto-Bismol, if necessary.

But most of all, I wish you people, past, present and future; and gratitude for all you have, who you are, and why you are here.