Are You a Social Media BarfShiner? 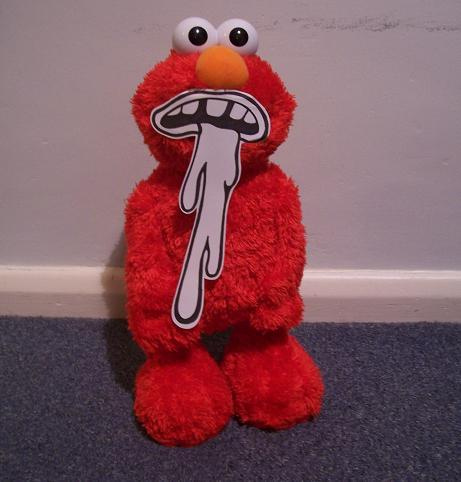 Today’s post has been a few months in the making, and a lot of people contributed to it.

Now, you’re probably wondering what a “barfshiner” is. You won’t find a definition in any dictionary, as far as I can tell, but the word came about thanks to Jill Foster and Erica Holt who, despite never having met each other (to the best of my knowledge), came together via the comment thread on a recent question I asked via Facebook and Twitter:

“Do you secretly want to puke when you consistently see ‘rah rah’ Facebook updates from certain people?“

And I must give credit to Donna Vincent Roa for suggesting the title of this post. 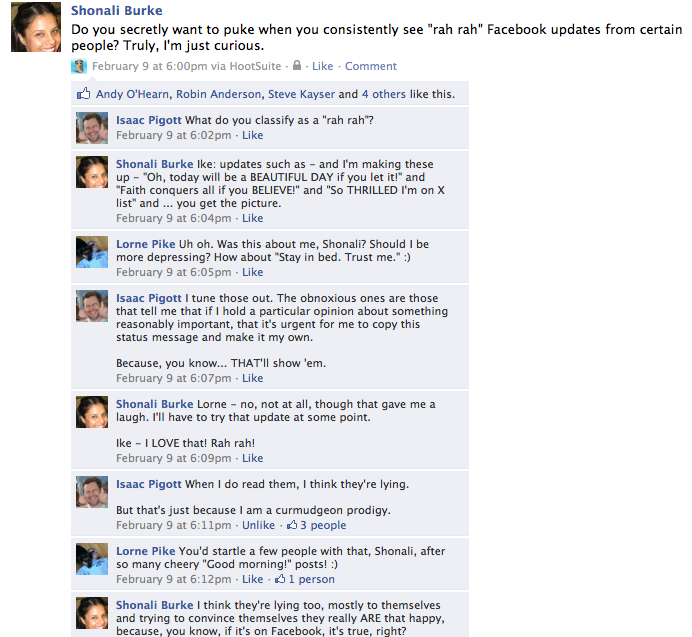 I really had no idea what a chord this would strike among people. I’ve lost count of how many responses I got via Twitter (thank you Jen Zingsheim for rescuing me from Facebook-search-hell). This particular FB post got, I believe, 51 comments and, yes, some of those included my replies to comments, but still, that’s a pretty big number for me.

Truly, I wasn’t trying to be a curmudgeon

(though I can be plenty curmudgeonly when it’s called for, ha, take that, Lorne Pike). It was my reaction to seeing a spate of social media status updates that came across (granted, to me) as overly-inspirational or doggedly in the pursuit of convincing everyone else that, “Gee, folks, I have SUCH a great life, LOOK at me, I’m super-duper-califradgilistically-awesome!”

I have no idea if I spelled that right, so don’t get all crazy on me now, it’s a made-up word to begin with. And I was curious to see if others reacted the same way.

Now, I’m not all that much of a curmudgeon. You’ve seen me say “Good morning!” countless times on Twitter and Facebook, and I confess to using far too many smiley face emoticons in SM.

But I think there’s a difference between that and relentlessly posting updates that basically say how great your life is, all the time … because, by inference, what you’re really saying to everyone else is that their life sucks … all the time.

For example, yesterday Gini Dietrich shared quite candidly about how she’s been a complete PITA over the last few days. To me, that’s a real person talking. Just as, if you were actually pick up the phone to call me, or even tweet me, and ask me how I was doing, I might say, “Just dandy!” or I might launch into a tale of woe. And no, I wouldn’t blame you for running as far as you could in the other direction, but the point I’m making is that with me, Gini, and many others I know, WYSIWYG. (Ask Davina Brewer for that translation, if you need it.)

This particular conversation thread on Facebook led to Erica (you can read her WUL postings regularly if you subscribe, cough cough) sharing a piece from Slate titled The Anti-Social Network. JZ (that’s Jen Zingsheim, not the other JayZee) wrote a really thoughtful post not long after this Facebook exchange on whether or not social media makes us unhappy.

Real people have days that are up and down. If you and I talk frequently on Twitter or Facebook, for example, and I suddenly notice a dearth of posts from you (or vice versa) I’m going to wonder what’s going on with you. Because that’s the way life goes, right?

When you’re really chipper, you’re ready to share it. When you’re not, you may not want to, except among a very close circle of friends. Maybe that dearth of posts is due to work overload, personal crap, who knows what.

But if you’re “always on,” how will I know when the real you is surfacing?

There seems to me to be a tendency among social media users to project an “always happy” self-image to the world, regardless of what’s actually going on deep down. If we’re going to talk about authenticity in social networking, shouldn’t we at least try to accurately portray what’s going on offline, online?

That doesn’t mean that we have to moan and groan about our woes all the time. But it does mean, at least to me, that we’re not going to pretend everything’s hunky-dory when it’s not. So that way, when we’re really, truly, happy, it resonates.

And the people who do … those are the ones I think of as social media barfshiners.

What do you think? As always, the comments are yours, so please please PLEASE bring it on.