How to Make Your Email Autoresponders Sizzle More Than Jessica Rabbit

There must be something in the wind, because after months of not traveling I’m suddenly all over the map.

Last week it was Amarillo, now I’m in NYC … told you, literally all over the map!

Before leaving and when drafting my autoresponder, I had not yet experienced Amarillo’s high winds (I did when I was given a tour of Cadillac Ranch ZOMG SO COOL).

But this is what it said: 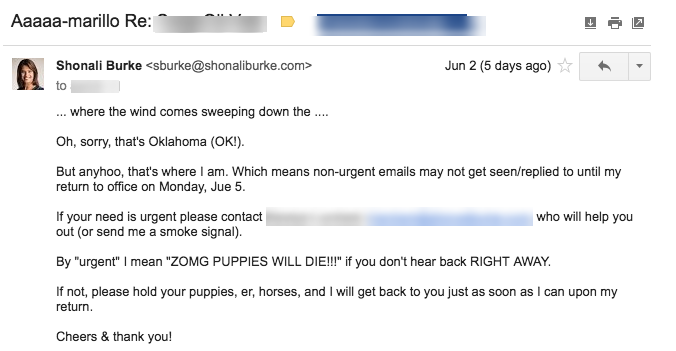 I cannot TELL you how many chuckles it gave folk … including several in/from Amarillo, and how many compliments I’ve received on it (and no one even mentioned the typo!).

That I could make someone smile makes me feel really happy.

Because we’re then a tiny step closer to moving from “words in an email” to people making a connection.

And when one tends to need a life preserver to make it through one’s inbox, an autoresponder that makes you grin sometimes gives you the energy to keep going.

(OK, a bit dramatic, but you know what I mean.)

Here are three elements I try to hit in ALL my ARs:

In this case, it happened to be the Amarillo wind, which everyone who lives there will tell you about.

The way I wrote the subject line, you heard the opening line of “Oklahoma!” … but then you were presented with Amarillo instead. Totes unexpected and totes chuckle-worthy.

I always ALWAYS mention when I’m likely to reply and what an “urgent” need really is.

The ZOMG PUPPIES bit drives that home … again with a chuckle (and maybe a bit of “NOO!!!”).

I started writing autoresponders like this several years ago, and they’ve done so much more than just let people know where I am/what I’m doing.

They’ve given people a bit of a sense of who I am … and what it might be like to work with me in some capacity.

And that understanding – of what it would be like to work with someone – is what drives business relationships that often deepen into warm friendships and camaraderie.

Do I always write a Jessica Rabbit of an AR? Of course not.

But I try to get it “just right” more often than not. And sometimes what I’m dealing with is just too serious to make light of … and then I don’t.

If you haven’t already started infusing personality into your ARs, try it.

Start small, don’t do anything you’re uncomfortable with, and see how it goes.

Over time you’ll see that this extremely useful automation that we’ve come to rely on will make you look anything but robot-like to your network … and help transform them into your community.