Putting the “We” in Community 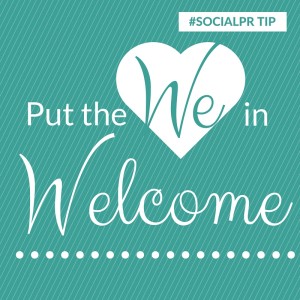 In the social space, there’s a lot of talk about “community.” We hear it all the time and, rightly so; because community is just that important.

Like Rome, however, a community can’t be built in a day. It takes effort and time; two elements that many companies and businesses don’t want to invest in.

But community is a funny thing; you’re either all in, or you’re out.

We posted this image on Facebook the other day, and I was curious as to how people put the “we” in “welcome. Here’s what Paula Kiger had to say:

“We don’t currently do anything at Lead Change/Weaving Influence to welcome new community members … BUT one silly thing I do personally that may be more meaningful to me than the recipient is marking every hundredth FB friend and every hundredth Twitter follower. I send them the very (intentionally amateurish) kitschy “gift toaster” (or “twoaster” on Twitter) to commemorate the ‘milestone.’ ” (Updated: here’s the FB post so that you can see the toaster.)

I think that’s a really cute idea. Paula did note how few people actually respond, especially on Twitter. That could be due to all sorts of reasons, but it’s still a cute idea.

So that kept me thinking about how one puts the “we” in any community forum, as well as how one sustains it.

Putting “we” in community

Getting it started really isn’t all that tough; it’s keeping a community feeling connected that’s the really hard part.

Case in point: last evening. I’d been feeling a bit “off,” but it was time for the Virtuoso group call (my Social PR Virtuoso Master Course is closed right now but you can sign up to stay in the loop as to when I’ll re-offer it).

And boy did that perk me up!

It was so much fun talking to really smart practitioners not just all over the country, but all over the world – Corina Manea representin’ all the way from Spain! And the fact that Corina did that – that she stayed up until the middle of her night to join us – well, she sure made me feel like we are a community, albeit a fledgling one.

Going back to Paula, she wrote a really interesting post a couple of days ago, discussing how the “weaving” of our social media threads changes with time. And she cited two examples of social media connections who, despite a warm and fuzzy persona, have stated publicly (in different forums) how they in fact try to keep their online contacts at a distance.

On the one hand, I can understand somewhat; as your network grows larger and larger, how you interact with them IS going to change. It’s impossible for you to be as close to everyone as you were when your network was tiny; and I can understand the physical and emotional toll if you try to sustain this.

But on the other hand… they’re your community. They are, to a large extent, why you got where you are. It would be pretty gauche to ignore them now, don’t you think?

(Paula did touch on this in her post as well, but much more diplomatically.)

Yes, it is time-intensive and tiring to continue to build your community and make sure these “invisible threads,” as Paula so beautifully put it, don’t break.

But … I think you have to. You don’t have to do it all at once, and you don’t have to meet every single person whenever they want; you do need to mindfully exist within the construct of what allows you to live a functioning, productive life.

You have to keep putting the “we” in community, otherwise it goes back to being “I.” And where’s the community in that?