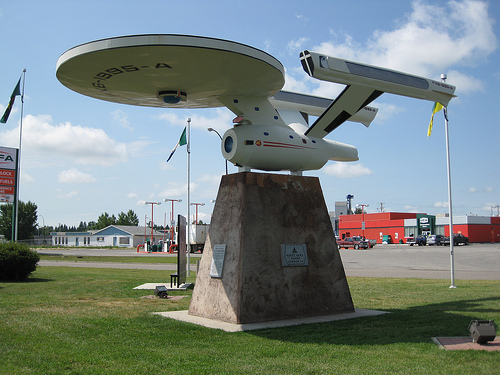 There’s a line in the chorus of Nicki Minaj’s song “Starships,” where she sings “hands up and touch the sky.”

I know this for two reasons:

#1 because it’s on the radio all the time, and

#2 because everytime Nicki Minaj sings that line my three-year-old dutifully throws her hands up. In fact if I don’t at least throw one obligatory hand up – she yells at me.  “Hands up, Dad!  HANDS UP!”

It occurred to me that some people treat infographics like my three-year old treats “Starships.”

If there are beautifully presented pictures, the information informing them is rarely questioned, just as my daughter dutifully obliges any call for raised hands.

One recent infographic illustrated this point quite well. It was  generated by Boticca.com, describing the buying behaviors of customers referred from Pinterest and Facebook. They had a large sample size (100,000) and made some very bold assertions about an increased value of Pinterest versus Facebook for ecommerce.

The problem with this is that this is simply one case study. While 100,000 people surveyed is impressive, repeating the same action 100,000 times proves the validity of an action in a single circumstance, and not it’s applicability to any other situation.

Consider this infographic that I created. 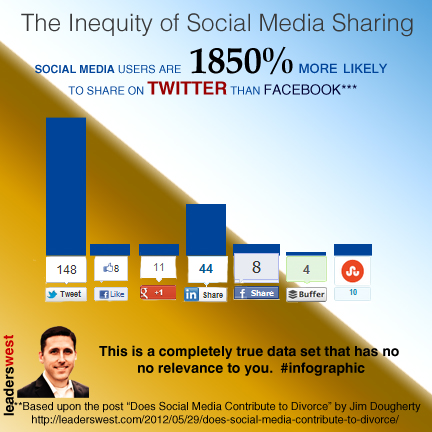 It shows that there is a much higher amount of sharing being done on Twitter than on Facebook.

What I’ve shown are simply the results for one post, but if I did a survey of 50,000 posts, the numbers would be equally disparate.

What isn’t reflected in those numbers is that I am part of the Triberr community, which allows bloggers to cross-promote each others’ posts on Twitter.

I also spend more time on Twitter than on any other social network, so even though the data supporting the infographic is limited to the results of one post, if I replicated it 100,000 times, it would continue to return similar results.

If you take a recent post on Erin Feldman’s blog (Erin is a frequent contributor to Waxing UnLyrical), the percentage of shares from Facebook and Google Plus are equal to each other, with Twitter as a smaller proportion of the whole than share of my posts.

Does this negate what I say is true about my blog? No. What it says is: what’s true for my apples isn’t true for Erin’s oranges.

What do we understand about the Bottica results?

We understand that based upon the customers referred from either platform, they get better results from Pinterest.

But what conclusion should we draw about Pinterest’s value versus Facebook’s? Simply that Bottica has more success with one versus the other.

Anyone who makes the leap in logic to try and apply Bottica’s results to anything except Bottica’s sites is a little irresponsible. Anyone who believes those assertions is a little gullible.

How do you like those apples? (Just don’t try to apply them to your oranges.)