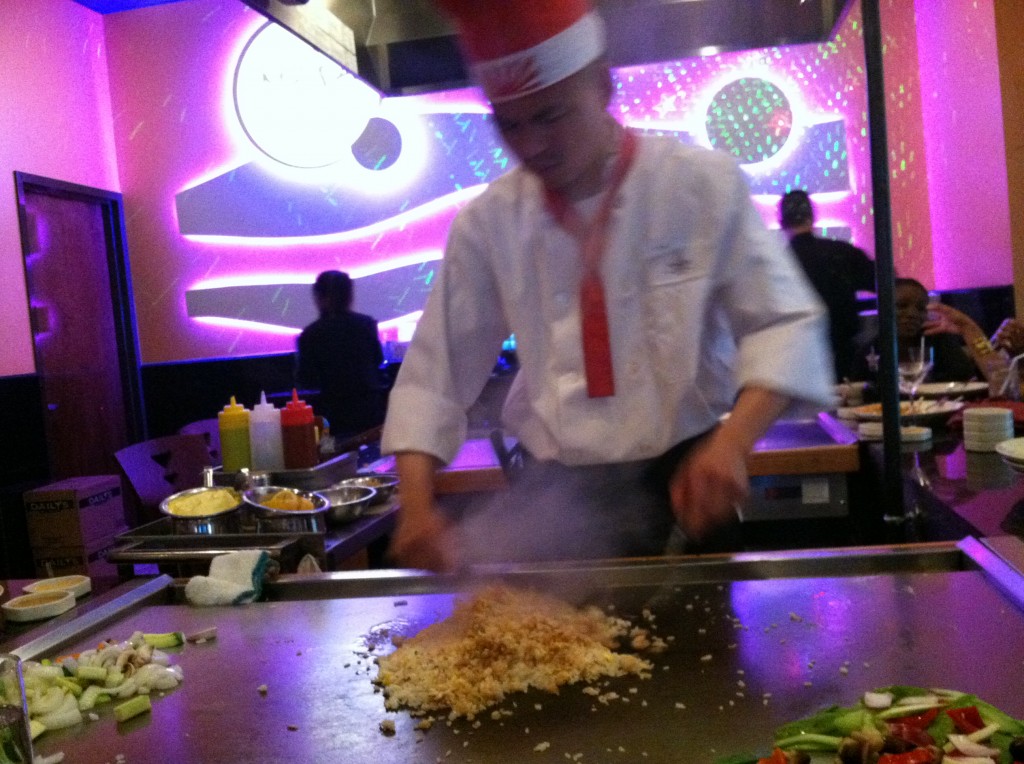 A social media lesson from hibachi

The other evening, my husband and I tried a new Japanese restaurant that’s opened in our ‘hood. It bills itself as “hibachi steakhouse and sushi.”

For anyone not familiar with “hibachi” restaurants, this is basically where several guests sit around an open cooktop, and their food is cooked in front of them (though those of you who are familiar with the concept may not have known that the type of cooktop we see in hibachi restaurants is really a teppenyaki grill… but I digress).

It was a lot of fun.

The food cooked quickly, and the chef put on quite a show. I ordered steak, which was good, and my husband ordered steak and lobster tails, which were also good.

Note that I said the food was good. In fact, it was very good.

I even ate some of the noodles and fried rice that were heaped on my plate, because they were cooked in front of me, for me (typically I don’t eat foods that are high in starch, since I underwent a lifestyle makeover, primal style, a while back).

But if I weren’t sitting at that table, watching my food being cooked in front of me – for me – would I have raved about the food?

It’s not about the food

Probably not… and even now, as you notice, I’m not really raving about the food.

It was that I felt special, because of the way the food was cooked, and served, to me. Because, as my husband said, “You can get steak and lobster tails anywhere. You can’t see it cooked in front of you anywhere.”

This is what we’re up against all the time. The knack of making how people experience what we do… special.

Frankly, I don’t think it matters what we do. Because whatever it is we do, we have to do it in a way that makes others feel special.

Politicians and governments have to find ways to make their constituents feel special, and ideally, they should be doing this all the time, not just when it’s time for them to get elected, or re-elected.

And social media gives us the perfect platform to do this… because of the myriad ways it lets us communicate with each other.

How does one do this?

Well, as an individual (and whatever else we are, we’re all that), I can:

– make it a habit of replying to each @ reply I get on Twitter (unless they’re from spammers or trolls, in which case I don’t), when I’m tagged on Facebook, in Google Plus, etc.

– replying to blog comments, participating in the blogosphere by commenting on other blogs, and sharing blog posts that I like

(For the most part, I think you’ll agree that I do all this; my blog commenting has been down recently, but I’m trying to get it back up.)

And as businesses, you can… do pretty much the same.

that businesses usually run into are:

a. They forget they’re run by people, so they try to behave online the way they think “corporate” entities should, which is usually to be excruciatingly boring, so that no one wants to engage with them (or worse, they’ll behave like spammers);

b. They get so worried about the time they think will get sucked up in “chatting,” they forget that “chatting” is how people form and build relationships, which is what leads to business-building;

c. They are terrified by all the tools out there, and get so lost in trying to figure out which tool to use, that they take forever to get started… and by the time they do, they are so far behind their peers, it makes them even more terrified. And so on, and so forth, etcetera, etcetera, etcetera.

So we end up with a handful of businesses that do social well, and “the rest,” who by now know they have to be on social, but still don’t know how to be social.

It’s not that difficult. Really. You just have to remember that social media is just another way for people to connect. So use it to do just that. Connect, as the human being(s) that you are.

Because by doing so, you will start to make those you come into contact with feel special.

And that’s the most important thing you can do as a business. Make your customers feel special.

That’s what I think. What about you? And yes, I really want to know, because to me, each and everyone of you is special. Unless you’re a spammer or troll… ha!