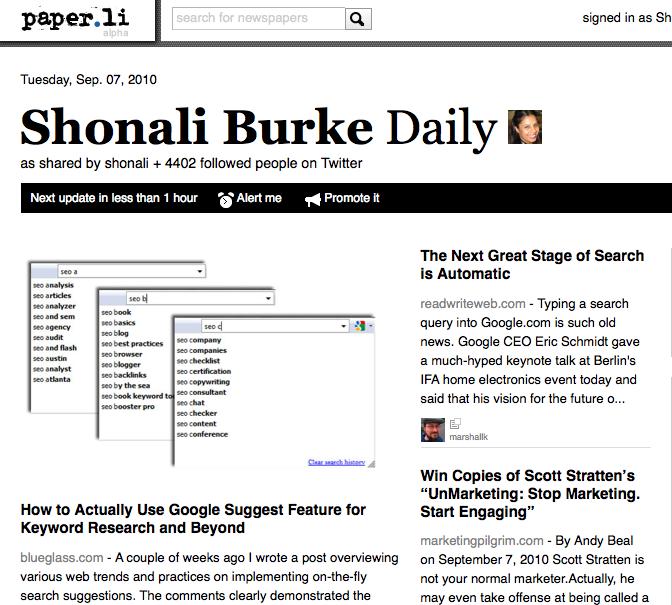 I first heard about Paper.li via Gautam Ghosh on Facebook a few weeks (or was it a month?) ago.

It looked cool, but I didn’t really start playing with it until last week, and when I Amplify’d Neville Hobson’s excellent assessment of it.

If you’re not already using it, I think you should check it out. IMHO.

Much has already been written about what Paper.li is, so I won’t bore you with too many details. 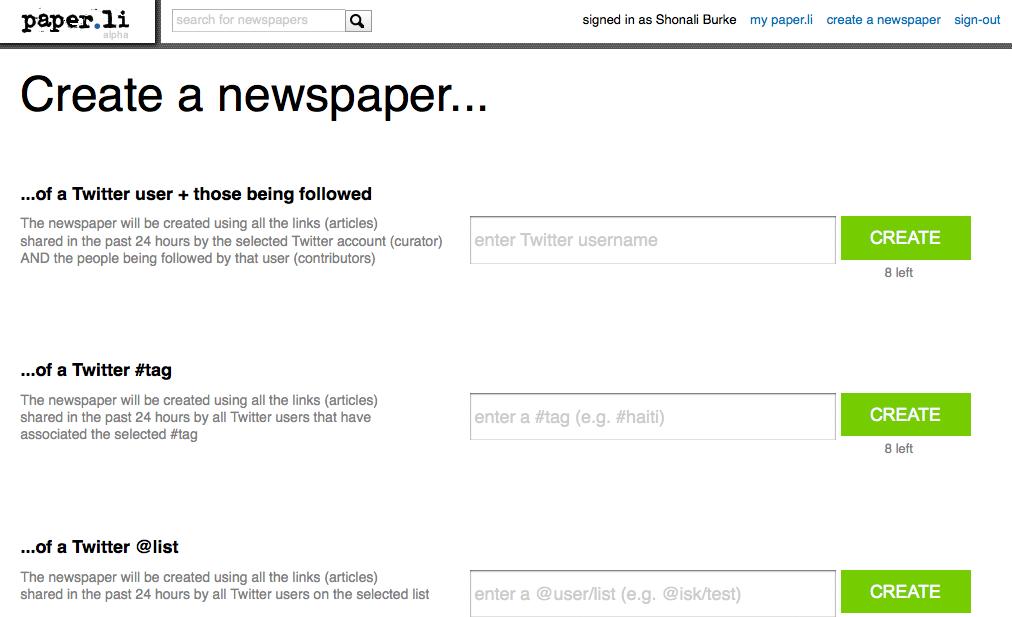 More write-ups on Paper.li that I think are worth your while are at GigaOm, PC Magazine and Stay on Search. Steve Woodruff also has a nice write-up of a few pros and cons over at Connection Agent.

2. It’s a practical way to go through the content your network is sharing, which is almost impossible to do if you’re only going to try to keep up with it via your Twitter stream.

When you’re on a newspaper’s front page, just change the view to “see all articles,” and you can flip through the pages and catch up on the content that looks interesting.

3. It’s practically effortless, especially if you select the “promote” option once you’ve created your newspaper, since it automatically sends out one tweet a day every time the newspaper is updated (I think it’s every 24 hours from the time you set it up).

4. As Neville points out, it’s a great way to build community, especially if you use a targeted Twitter list or hashtag to create a Daily.

Paper.li says it’s very much a work in progress, so you’ll have to live (for now) with not being able to schedule when your promotional tweets are sent out (the upside to that is that it’s done only once a day, and you can stop the automated tweets whenever you want), etc.

Seven steps to a better Daily

If you do create your own Daily, here are seven things I’ve learned that might help you:

1. You can’t select the content, or what will be used for your promotional tweet. I don’t know if anyone has figured out how Paper.li does it, but I haven’t.

So yes, sometimes you’ll wonder why a certain story was included.

I got nothin’ for you.

And while I appreciate being thanked for being included in any of my Dailies, it’s really not me, it’s you.

2. Because of this, a good way to go might be to create Dailies of a few of your targeted Twitter lists, or of a hashtag that you know is used very specifically.

For example, my measurement Daily might be much more interesting than my “Shonali Burke Daily” to folks who are interested in PR measurement.

Initially, when I set up the Women Grow Business Daily (client disclosure), I did it as @shonali.

So the daily tweets promoting this paper were coming from me, and not @wgbiz.

Since there is a likelihood that, as people are “included” in your Daily, they will follow you on Twitter if they hadn’t before, that was not a smart thing for me to do.

So I deleted the WGB Daily I’d created as @shonali, signed back in as @wgbiz and recreated it there.

5. Right now, you have no control over when your Dailies are promoted. So if you’re going to set up several dailies using different lists or hashtags, set them up at different times during the day.

That way, the once-daily promotion tweets won’t be too close to each other and you’ll minimize the potential for irritation among your followers, which is one of Steve’s concerns.

On the other hand, most folks’ Twitter streams move so fast, I don’t know that they’d see all the tweets you’re sending out, unless they’re stalking you online.

In which case you have a whole other problem.

Me, I only see someone’s Daily if I’m mentioned in the promo tweet. Otherwise it pretty much slips by me.

But if that’s something you’re concerned about, that’s one way around it.

6. When Paper.li asks you if you want to promote your Daily, it also offers you the option to grab the HTML code to place a widget on your blog or site.

Much to my irritation, I couldn’t find that option at any other time.

I had to “stop” promoting my Daily, and then re-promote it in order to get this.

This is why you might have seen two “Shonali Burke Daily” tweets instead of one from me today.

So if this is something you want to do, grab the code then, even if you’re not going to use it. Bung it into a text widget in your blog, and you can decide later if you want to change the width, color, etc. At least this way you’ll have the code.

So if you want to share your Dailies with “non-Twits,” just keep the URLs handy.

This is what I’ve learned in about a week of experimenting with Paper.li. All in all, I think it’s a remarkable tool and I suspect it will add more bells and whistles as it goes along.

I hope it doesn’t add too many, though, because its simplicity is part of why it’s so appealing to me.