The Moments That Made Social Slam 2013 Momentous 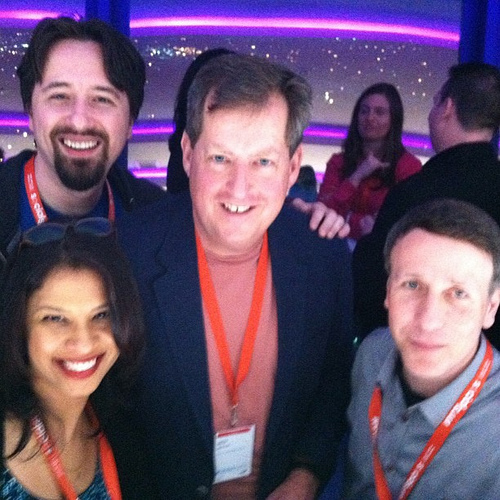 It’s been just about two weeks since I returned from Social Slam.

You’ve already heard about what a wonderful event it was, from so very many people. And I told you of how it was one of those OMG-it-finally-happened moments for me. Frankly, I haven’t written a wrap-up post because everyone else beat me to the punch.

I have a surprise/gift for you as far as that goes, but that’s at the end of the post. Please don’t cheat by skipping to the end!

But then, the other day I was reading Mark Schaeffer’s recent and most excellent post about the online-offline intersection at its best. He related an anecdote about seeing Ian Cleary (who is wonderful!) at SMMWorld:

“At the recent Social Media Marketing World event, I ran into Ian and asked him how many sessions he had attended and he said ‘none.’ At first I was surprised.

” ‘I’ve been in the hallways,” he said. “That’s where the conversations and relationships are taking place.’ “

This is really true.

Do you remember how I told you, when I was at the 2012 PRSA International Conference, what really made it special was the “off-conference” time I got to spend with people? Of course there were some sessions that were terrific, but the time that I spent outside the sessions was, as the commercial goes, priceless.

This doesn’t mean that you shouldn’t attend any conference sessions. Far from it (and especially if you are new to the biz, then you must attend as many sessions as you can, in my opinion).

However, it’s really important to start getting to know the people who are making the industry what it is, and that means outside of the parties, etc. – or, maybe, during them – you have to find time to chat one-on-one, or in small groups.

That is networking, not collecting and handing out a bunch of business cards.

The sessions at SoSlam were terrific, but what will always stay with me are the memories of (in no particular order):

1. Brian Vickery putting me back in the hotel elevator each time we were going up in it, because I was so busy talking, I’d get out on his floor instead of mine (two floors above his).

3. Jayme Soulati and I screaming when we first met each other, at the SoSlam tweetup. She has the most beautiful sparkly eyes!

4. Seeing Adam Toporek after way too long, and getting to spend wonderful one-on-one time with him. I can’t tell you how kind he has been to me, and how much he has helped as I resurrected my business.

5. John Jantsch walking up to Adam and I as we were hanging out at the VIP party (see photo up top), and spending at least 20 minutes of his time chatting with us. He didn’t have to do that. But he did. And is just one of the nicest real superstars in our field that I have ever met. Do you know he bought some scholarships to the conference for students who might not have been able to attend otherwise?

6. Ian Cleary reaching out to me ahead of time to see if we could connect; we couldn’t because of my flight schedule, but we did later on, and had a blast.

7. Jeff Bullas laughing heartily when I cracked a joke (that I stole from Adam, aren’t you curious as to what it was?), at the after-party.

8. Rosemary O’Neill being just the sweetest person ever, just being around her calmed me down. She is killer smart too!

9. Laura Click: ditto. She actually told people to come to our session instead of hers, that’s how nice she is. I mean, who does that? Also she has the bluest eyes.

10. Dancing – yes, dancing – with Jeff, Ian and Amy Howell at the after-after-after party. We had so much fun, and I have a Vine video to prove it.

11. Seeing Kellye Crane after way too long as well, and the fact that she made it a point to find and chat with me at the after-party meant a lot to me.

12. Of course getting a bear hug from Mark himself, but I wish I’d been able to chat with him some more. Hopefully next time.

13. Gary McCormick going out of his way to pick me up at the airport and give me a tour of HGTV headquarters. I’m a DIY and HGTV junkie, so that was crack for me (did you ever think you’d hear me say that, by the way?).

There were so many more moments – oh! Brian and I breaking into impromptu harmony! Gabrielle Laine-Peters and Sean trying to out-moustache each other! Meeting Anne Gallaher! And Karen Freberg! And Randy Bowden! And Jon Moss! And Xan Pearson! And see Jason Konopinski again! And Dino Dogan! and … see what I mean? I’m going to leave something out, and I’ll get into trouble, so I may as well stop here.

Mark, if you’re reading this, I can’t thank you enough for inviting me to speak (“What’s that you say? Come back next year? Why, I’d love to!”), and to each and every person who was kind enough to spend time with me – thank you so much. Social Slam truly is remarkable, not just because of the high quality of conference content at an amazingly reasonable price, but for the stratospheric quality of connections you make there. So if you haven’t been yet, you should put it on your calendar for next year.

I said I had a surprise for you earlier on. Here it is. I made a Listly list of all the posts I could find that both previewed and reviewed Social Slam. So this should be a really easy way for you to catch up on all of them, and save them for future reference (because there are some great lessons learned in many of them). And if you find any I’ve left out, please do add them to the list.

Have you had any “aha!” moments when attending conferences, or after returning from them? What other tips can you share on relationship-building? Please do share, you know the comments are yours!