I first came across the folks at Traackr

when PRSA’s 2010 International Conference was held in DC last October. Actually, I didn’t come across them so much as they introduced themselves to me via Twitter and email, and asked to see if we could meet up since they’d be in town. As luck would have it, we weren’t able to meet in person, but we stayed in touch.

Seeing as how hot a topic “influence” is, we’d ping each other every now and again, and I started getting curious about Traackr. Finally, Courtney Vaught, who’s an account manager with them, convinced me to get a demo of the system, with no strings attached. I was so intrigued by what I saw that I asked if she could set up a call for me with Pierre-Loic Assayag, the founder & CEO.

After talking with “PL” (if you think pronouncing “Shonali” is tough, wait until you try pronouncing his name), I came away thinking, “Dang! This thing is hawt!” And to let me play with this system even more, they very kindly gave me a free three-month trial of the system, which I’ve been using to help with the Blue Key campaign.

Much has already been written

about Traackr. If you haven’t read them, I’m pointing you to posts by Valeria Maltoni and Rick Liebling, to mention just a couple. Given how much discussion there is around who an influencer is, how to identify them, influencer scores, yada yada, here is the main reason I’ve become a huge fan of Traackr:

With Traackr, it’s not about numbers, or how much you talk to someone on Twitter all day. It’s about context, relevance and, therefore, potential influence based on that contextual relevance.

In a nutshell, here is how Traackr works.

You identify a particular area, or topic, that you are trying to find online influencers in. For example, for the Blue Key campaign, one of my searches focused on refugees and humanitarian issues, i.e. people who are active online and who post frequently, to any number of online channels, about those issues.

You then start making a list of keywords. You can set up upto 50 keywords per search. As you’re doing so, Traackr will tell you how broad or niche that keyword is. You can also include Twitter hashtags, and prioritize keywords. For example, here are the keywords I’d set up for this particular search (refugee and humanitarian issues):

Once you’re satisfied with your list of keywords (you can test them by seeing what kind of list of people Traackr generates based on who in its database is using those keywords most frequently), you can activate your search. Then, Traackr starts crawling the Web based on your keywords.

When it’s had a few days to do so, it will give you your updated list of influencers, based not simply on how active they are on Twitter or Facebook, but on how much they use those terms in as many of their digital properties as they’ve been able to identify (and you can also edit your influencers if you find that the Traackr database is missing one or more of their digital properties – upon being verified, it will be added to their profile).

It updates this list on a weekly basis, based on how frequently they’ve been using your keywords. So it’s an active search, not a passive one.

This is important: as many of their digital properties as they’ve been able to identify.

So you could, for example, have someone who is not very active on Twitter or Facebook, but has a blog that is devoted to refugee and humanitarian issues. That’s someone I probably want to keep track of… and that’s the kind of thing Traackr lets me do.

Some things to note:

2. If you want to add more than 25 influencers to your list, you can, but that will cost you. How much, I don’t know, so you should try it out and see if that list of 25 is giving you what you need before you try to extend it (you can delete people if you decide they’re not relevant for you).

3. You can change your keywords as you need to, but I would suggest you spend a lot of time in putting together your initial list (their customer service is terrific and will help you review them). Then activate your search when you think your list of keywords is really solid.

4. Traackr is not cheap (on average, it will cost you around $500 if you’re signing up for a list as a new account, and then the price per list goes down). I asked PL if they would consider alternative pricing especially for indie pros and small businesses, and he said they would … but I don’t know when this will be.

5. Traackr won’t give you an “influencer score.” Derek Skaletsky, who works with the company (and who is also, coincidentally, the creator of Propz), made this very clear in a recent blog post. Yes, it will give you a list of people who use those keywords most frequently, and they will be ranked on your list based on that frequency, but it’s nothing like a Klout score.

6. The list won’t do your work for you. Just like you need to make sure your PR pitches don’t suck, you need to take the list for what it is – a starting point for you to identify people who are active online (and we all know the difference between being active online and offline, right?) in the area you’re interested in, so that you can start to build relationships with them and move your campaign ahead.

7. As of now, you can’t segment influencers by geography. However, if you are focusing on a particular geographic area, look carefully at their “footprint” in Traackr and delete those who aren’t relevant to your search (see example below). 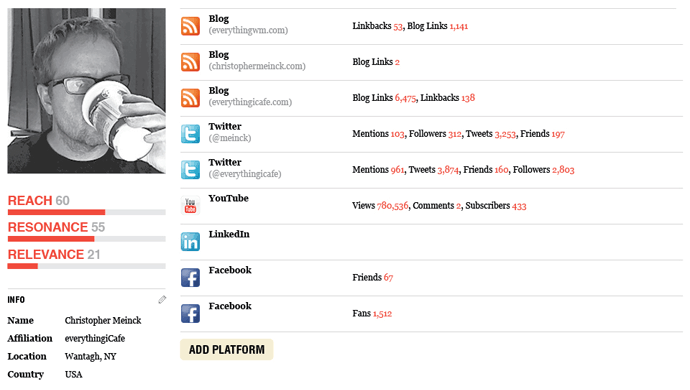 Because of the way Traackr focuses on topics rather than simply activity on Twitter and Facebook, I think it’s a real winner.

I do think that with Klout’s recent introduction of the +K feature, it (Klout) is trying to up its game. But I still think Traackr has an edge, because as Gini Dietrich wrote yesterday, you can still try to game Klout by giving +K to people, getting them to give it to you, and so on.

Is it possible to game Traackr? I suppose there is a way, though I personally wouldn’t have the energy to do it. But that will be one of the questions PL answers when he signs on to today’s #measurePR Twitterchat (12-1 pm ET). Please join us.

In the meantime, have you tried Traackr? What do you think? Are there other influence tools you’ve found useful? Please share, as always the comments are yours.