Facebook has been struggling since its IPO in May. Its stock has been almost cut in half, GM dropped a $10M ad deal, and Google is nipping at its heels with the purchase of Wildfire.

Facebook was not initially built to monetize; it was built to go viral. The company is betting on huge advertising growth in the next five years, and many people, including myself, are skeptical.

Unlike Google, I am not on Facebook to look for products, hence I’ve never clicked on a Facebook ad. I really just want to check in and connect with my friends.

As Facebook struggles to find its monetization strategy, there are some exciting companies that have stepped forward to meet a different set of social needs (and in some cases, pick up the slack where Facebook has stumbled):

Facebook has never had a fantastic mobile experience and a number of apps have tried to fill this void. One of the most compelling, for me, is Path, which lets you keep an ongoing journal of your life for both personal reflection and sharing with close friends.

The mobile interface is much easier to use than Facebook’s, and was built for a mobile life instead of trying to make a desktop application retroactively fit a phone.

Cutting through the crap

As much as I love my friends, I really don’t care to hear their thoughts every moment of the day. Trying to add in filters and prioritize friends and new feeds on Facebook is time consuming and confusing. Google+ was betting on this, but hasn’t succeeded in switching over users, perhaps in part because it’s not exclusive enough.

Path also taps into this need but the most exclusive social network is Pair where it’s just for you and your significant other. It aggregates all the ways that you currently keep in touch with your special someone and really taps into the desire to never be apart from the one you love.

Facebook has never been a way to find professional connections and LinkedIn is also clunky in many ways. Enter Meeteor, which is built on Facebook but does the work for you in finding professional connections. It will find someone at the company you want to talk to and either introduce you, or help you set up a “warm” intro from someone you know well.

Fancy and Svpply have tapped into the social aspects of shopping (and coveting). Now when shopping mindlessly online, you can tag those things that you want but really can’t afford right now and store them for later. You also get social benefits by being the first to “want” something really cool.

These sites are visually so much more appealing than anything on Facebook, and the pictures of the products are themselves inspiring. You may spend hours browsing other people’s pictures on Facebook, but on these sites you’ll quickly become addicted to beautiful photography and the dreams of things you could have.

The reality of it is that, in many ways, Facebook created the environment for our connected social needs to evolve so highly and specifically. Its deficiencies have illuminated opportunities, but its very existence is to be thanked for the rise and success of many of these sites.

The task moving forward will be for Facebook to create new needs, or capitalize on other voids in a way that no one else can. Mark Zuckerberg’s first post-IPO interview at TechCrunch Disrupt pointed to one way this could happen:

Google’s Ad Preferences tell me I’m a 25-34 year old male (I’m a female), and as long as I’m opted in, they make assumptions about my interests based on my online behavior and where I spend my time.

The end result is that I am shown ads that are more relevant to me, which is great for a business targeting me… but do I care?

Facebook has concrete data that could be leveraged to truly personalize my search and give me answers. What clothing boutiques have my friends gone to in San Francisco and liked? Facebook is the only site I can think of that could answer this question for me. And in case you had any doubts about going to Facebook to search, Zuckerberg let us know they “do a billion queries a day and we’re not even trying.” 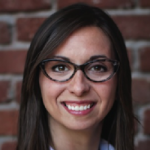