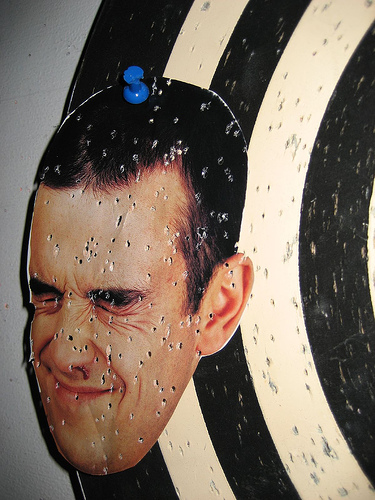 It takes a big person to take criticism well. It takes an even bigger person to act on his/her own criticism. And by “big,” I don’t mean literally; I mean “big of heart or spirit,” as I believe King Arthur was, or any of your mythological heroes.

Back story: I’ve come to know Erica over the last several months and think she’s killer smart, so asked her to guest post for me. I tend not to give my guest bloggers specific story ideas; I like to see what they come up with, I think it gives them more freedom. Since Erica is a frequent vlogger, however, as well as one who gave me such great tips on using video, I asked her to write a post (and vlog) on the subject. You can see for yourself that it was pretty well-received.

That being said, I must respectfully disagree with the ‘Don’t edit’ comment. The reason most posts are so unwatchable is the speakers are simply horrific. Erica was a fair speaker, but stil said ‘Um’ 12 times. Most people say ‘um’ between every sentence and takes the sheen off the best produced videos. Editing out the ‘uhms’ from the audio track would have taken very little time. Better still, one could learn not to say them. Though it is common for athletes to speak this way, and even some CNN anchors, when speaking off the cuff, it isn’t found in a polished presentation.

If he had said that, Scarlett would have just probably shrugged, “It’s fine, I can do better.”

When I read Brian’s comment, I couldn’t help but laugh (I mean, how many people would watch your video so closely as to count all the “uhms” and then rewrite “Gone With the Wind” to make a point?) while I waited for Erica to respond.

Which she did, with immense grace. And, as a result, any of Brian’s quills that may have been quivering quietened themselves down, while some quite delightful banter then ensued.

Brian is not one to let a point go to waste, though. Erica’s post made him get off his patootie, go get a camera and mic, and get ready to vlog. I am really happy about this because Brian is one of the smartest and funniest people I know, and I can’t wait to see him on video. (His book, Henry Wood Detective Agency, will be coming out soon, and I highly recommend you get in line to buy it.)

So what could have been taken (by Erica) as an extremely critical comment was not, but turned into banter and a learning experience.

What could have been left as merely a comment (by Brian) was not, but turned into action that will (hopefully) help him promote his book and a learning experience.

The rest of us

I didn’t just learn a lot from Erica, but specifically from this comment thread: