Draw Me a Story: Six Storytelling Lessons From Cartooning

Think of cartoons as storytelling, and you probably think of animation or graphic novels. You won’t get much argument here: my kids and I spent months enraptured by Noelle Stevenson’s “Nimona,” and we’ve probably watched every episode of “Shaun the Sheep” a dozen times.

But single-panel cartoons are stories, too ”” just really distilled ones. And drawing them for eight years has taught me a ton about storytelling, helping me connect with audiences whenever I put down the stylus and put on my communicator’s hat.

Here are six of the key lessons I’ve learned along the way, and the cartoons that helped to teach me:

Confounding expectations is a big part of humor. You think a story is going one direction, and discover it was headed somewhere else entirely. Here, you think at first this is someone in awe of nature… and then realize nope, they’re in awe of its financial potential. 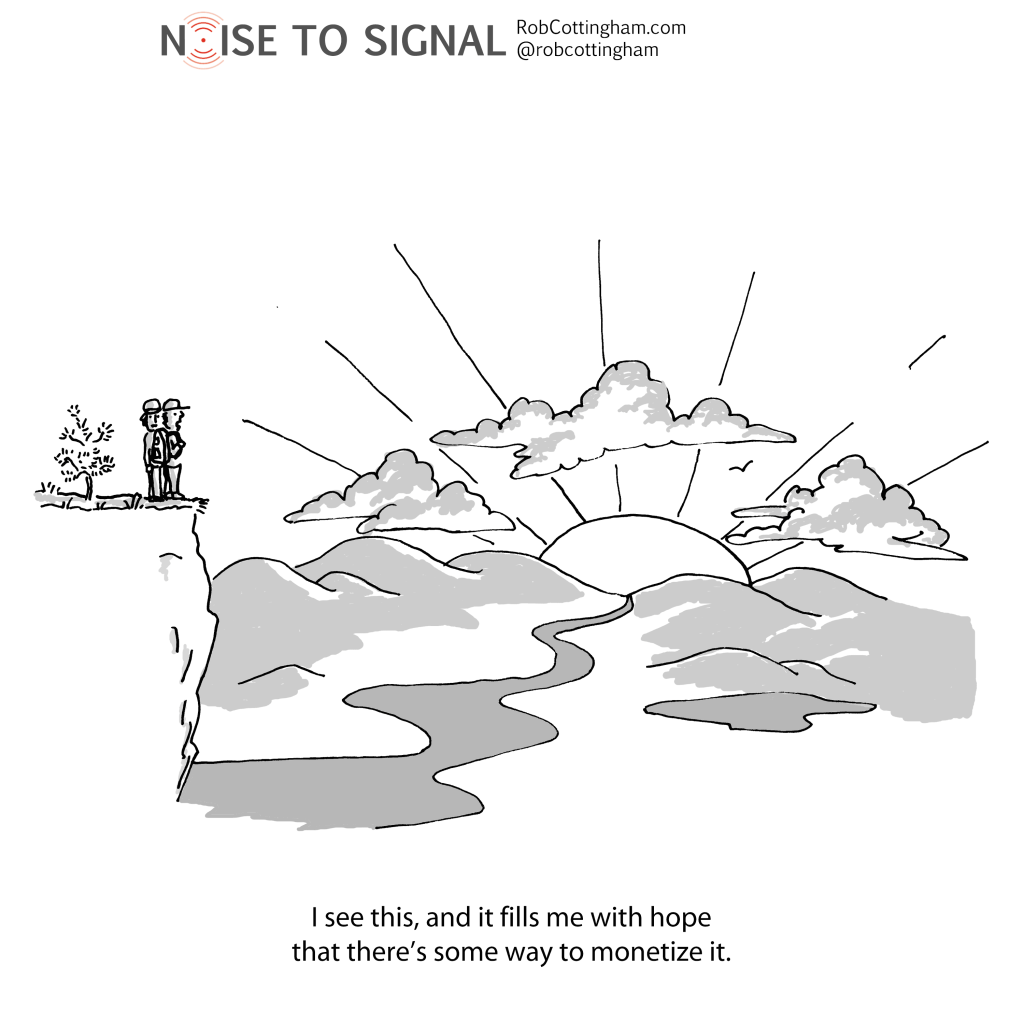 That works with all kinds of stories. We love the twist that recasts everything before it in a whole new light: think back to “The Sixth Sense” or “The Usual Suspects.” We love to be surprised. If your story unfolds exactly as expected, you’ve missed a chance to enthrall your audience.

The cartoons I hear the most about are the ones where people identified with the characters’ situations. For instance, if the thought of your inbox fills you with anxiety, maybe you’ll relate to this: 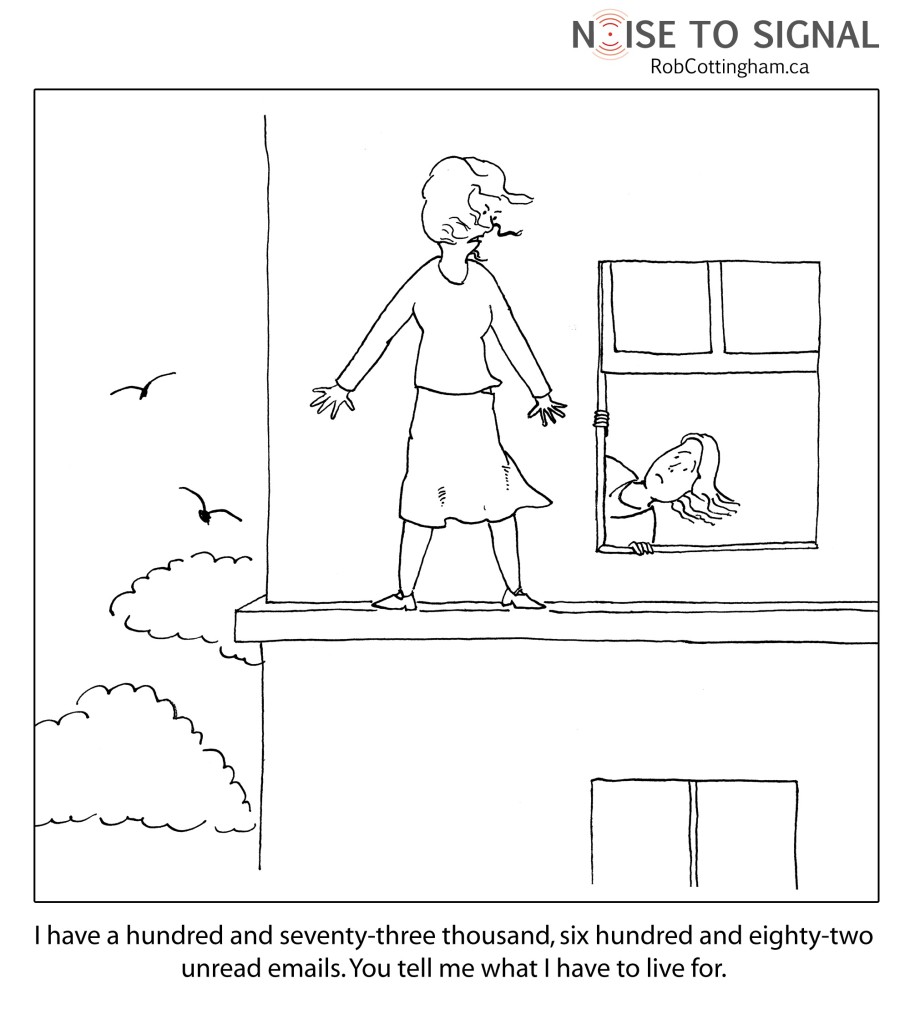 Your audience should see themselves in your story. And if you want to lead them to action (and not just a rueful smile) then make them active protagonists, not passive victims; show them how taking that action resolves a conflict and gives them a happy ending.

Nearly every caption that fills me with regret is a long one that I wish I’d made shorter. Heck, if I could figure out a way to trim this one, I would: 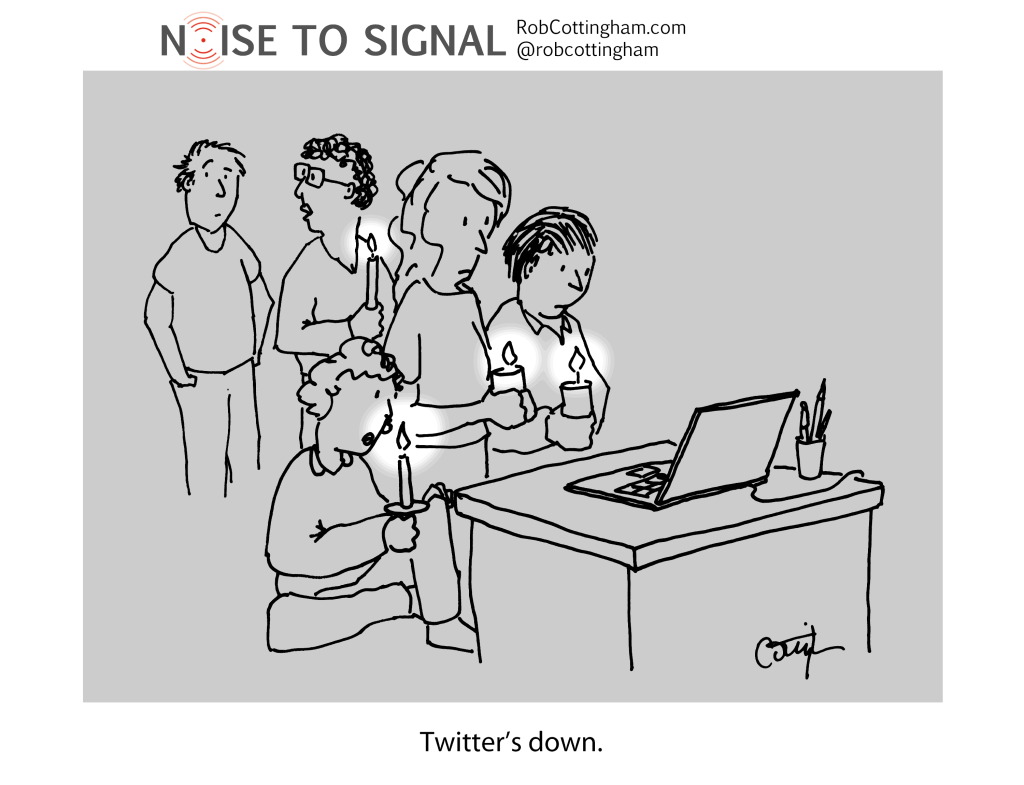 Everything in your story should serve a purpose. If a detail or a moment isn’t pulling its weight (say, by helping to create a picture or by lending emotional heft), cut it. In the words of Steve Crescenzo, do less and do it better.

Much of what makes many cartoons funny is that they leave just a little missing for the audience to figure out: a small gap in the circuit. The audience fills that bit in ”” like the information that McCormack just always asks if what’s on offer is meat-free. 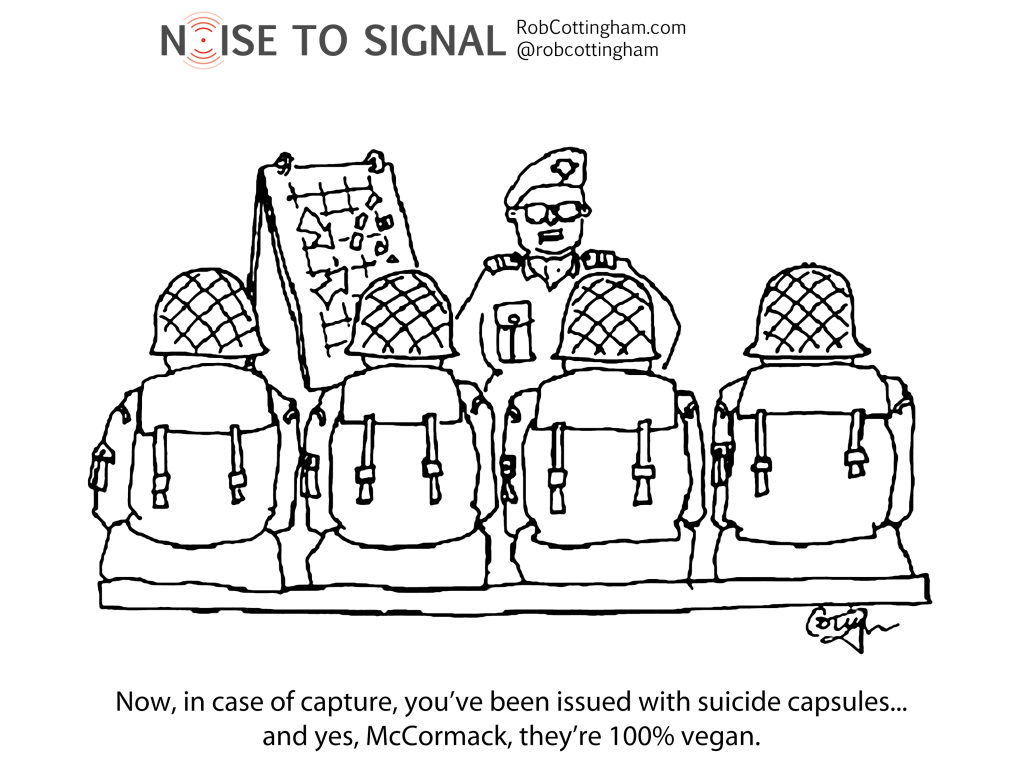 When the reader completes the circuit, the cognitive spark of realization helps trigger or amplify laughter ”” or, depending on the story, a jump of surprise, gasp of horror or surge of sympathy. The result for you is a lot more emotional impact.

Nearly every cartoon takes some kind of stand. And readers want them to, especially if that stand reflects a value they share. It could be something as serious as unease over surveillance… or as trivial as being fed up with retweet contests: 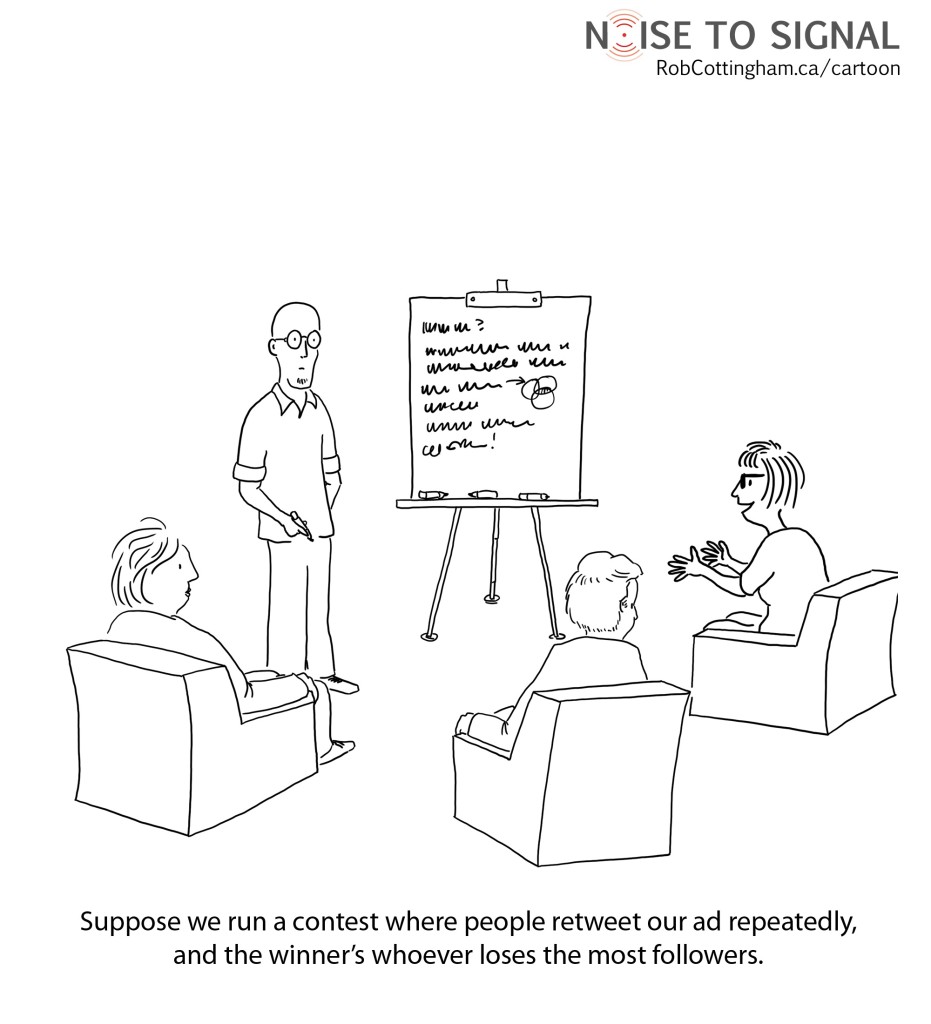 If all you’re doing is relating the facts, you’ll have a pretty bloodless story. But when you convey your attitude as well, and when that attitude lines up with your audience’s, you can forge a strong connection with them.

Obvious for a cartoonist? Maybe. But I often struggle to make the images carry at least as much of the humor as the caption. The payoff when I do is a funnier cartoon. This one, for example, would still work without the over-the-top majestic scenery, but the eagle and those mountains do a lot to magnify the joke: 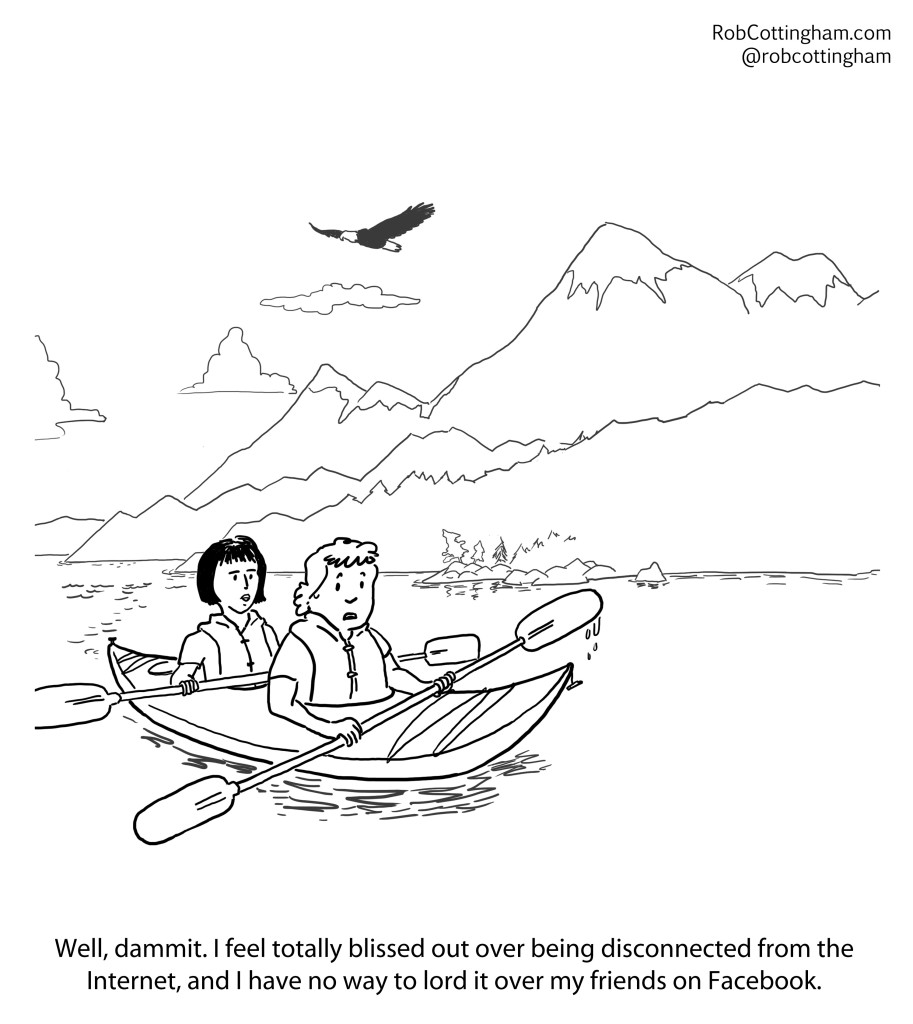 Your story may not include actual photos. But adding even a little visual description or other sensory detail can make it feel far more immediate and real to your audience ”” and much more powerful. 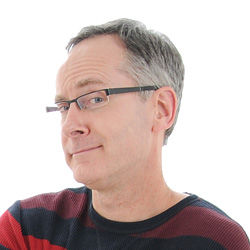 Rob Cottingham is a cartoonist, speechwriter and communications strategist with The NOW Group in Vancouver, Canada. His cartoon Noise to Signal offers his take on life and work in the networked era. It has appeared on such sites as Consumer Reports and PC World, and in books by Beth Kanter, K.D. Paine and Mari Smith. You can find Rob on Twitter, LinkedIn and his blog.