A few days ago, my pal Geoff Livingston tagged me in his meme, Ways to Increase Your Twitter Following Ethically.

When Geoff tags, you play (image: ClintJCL‘s Flickrstream, Creative Commons). But given the folks I was tagged with, such as Ike Pigott, John Haydon, Lauren Vargas, Allyson Kapin and Shashi Bellamkonda, all of whom I hold in high regard, I was left scratching my head as to how I could contribute without being repetitive.

Today, I had the perfect experience to set me off.

The last few days, I’ve been on the receiving end of tweets from complete strangers, demanding I follow them. How? By sending me an @ message saying, “FOLLOW ME!”

Er… why? Because you say so?

I got so irritated after receiving several of these in a row, I ranted on Twitter:

Apparently I struck a chord, as you can see from some of the responses I got: 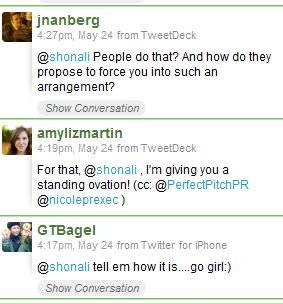 @PerfectPitchPR told me this would be a great “rant” post, so, PPPR, this one’s especially for you.

Don’t be a carrier

To pick up where Geoff left off, there are ways to get people to follow you, just as there are ways to make people scatter wildly every time you approach as if you were the carrier of a deadly airborne virus that would cause havoc among the unlucky recipients’ gene pool.

And sending an @ to someone you’ve had no interaction with whatsoever saying, “FOLLOW ME!” is the online equivalent of punching your fist through someone’s window and narrowly missing their nose. Not to mention it’s mind-numbingly gauche.

Here are some other ways to turn people irrevocably off to you, on pretty much any social network as well as IRL:

Pick a fight on Twitter with someone you don’t know, and about something that’s really not important, in the hopes of “engaging” them. People hate rubberneckers.

Send them a Facebook friend request that says nothing about why you’d like to connect with them. So you were one year behind me in high school? So were a lot of people. That doesn’t mean I want to share my online space with you.

We didn’t hang out in high school; why would we start now?

Breathlessly retweet EVERYTHING someone says. That’s not flattering, it’s stalker-like.

Put them on an email list – because it’s easy to find their contact information – that relentlessly bombards them with badly-written press releases and email newsletters. What happened to the concept of asking permission?

We seem to shout ourselves hoarse saying this, but the number of followers, friends, or connections you have matter not a whit if you’ve bought them, bullied them into submission, or bamboozled them.

All they are, then, are numbers, that don’t mean anything, because you haven’t bothered to take the time to develop a connection. Sure, you’re not going to become best friends with everyone you connect with (and I don’t know why you’d want to).

But why not do all the things that sound so clichÃ©d – engage, listen, contribute – to actually develop those connections into relationships?

It’s really easy to lose someone with one tweet. It’s really tough to bring them back.