My friend Katie Paine, who’s at Bulldog Reporter’s PR Measurement Summit 2009 in New York as I type this (and which I’m not attending), sent me an interesting note via Skype. Apparently the conference notebook contains the following reminder to “Please Use Social Media Courteously during the PR Measurement Summit”:

Social media create powerful opportunities for communicating among a network of colleagues — which can be used constructively but can also lead to awkward and unpleasant consequences when used ill-advisedly. During recent conferences in a variety of industries, for example, participants have provided real time commentaries of the events that have precipitated misunderstandings, embarrassment and even anger. For this reason we offer the following courtesy guidelines for participants in this conference:

Again – I’m not at the conference, and typing what Katie sent me as printed in the handbook, so if there are any typos, they’re Katie’s and mine.

I couldn’t help but think, though: for “courtesy guidelines,” aren’t there an awful lot of implied dont’s around?

I have certainly come across speakers who prefer attendees not to tweet (since that’s the most prevalent way of participating in SM at least that I know of) during their presentations. Granted, they spent a lot of time (one would hope) preparing and no one likes to think their audience is not paying attention. But if they’re going to decide for me how much attention I can or cannot pay while attending a presentation – well, I’m going to be thinking of spending my money elsewhere next time around.

Should commentary be kept to a professional level? Of course it should be. But one would hope the majority of folks who attend such conferences already understand this. It’s called, er, being adult.

I don’t know if Bulldog Reporter provided attendees with a conference hashtag (I assume most attendees are following their guidelines and NOT participating in SM), but surely printing that in the handbook would have been useful as a way to track these conversations and, what’s more, open the door to a whole new potential audience.

I’ve lost track of the number of conferences I was unable to attend but which I was still able to learn from simply by tracking the hashtags. And as far as not being able to pay attention to speakers if we’re using SM: well, we work in PR. Multi-tasking is usually our middle name (or one of them). And most of us are smart enough to stop tweeting or Skype-ing if we’re losing the presentation by doing so.

I threw out a quick poll on Twitter: 1) Do you think conference organizers should dictate SM use (tweets, etc.) during conferences? 2) Would you listen?

Here’s some of what I got back: 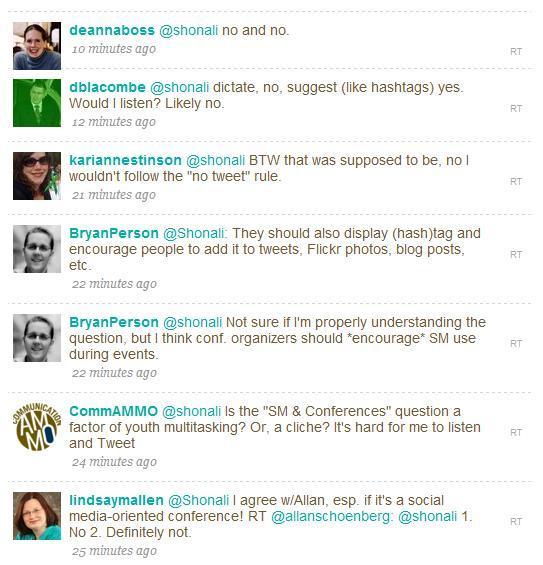 I’m sure Bulldog Reporter had the best intentions in mind while drafting its guidelines. I just wish it didn’t come across quite so much as a way to control – or eliminate – the incredibly multidimensional facet that SM can bring to such conferences. Nineteen Eighty-Four was a long time ago.