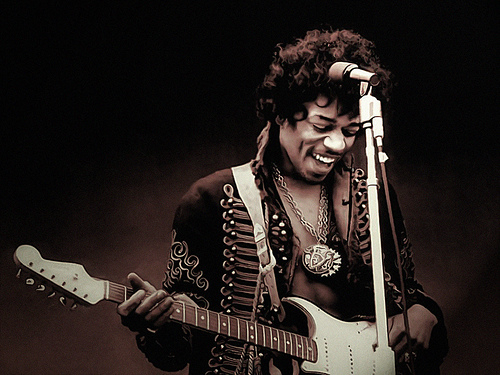 This past week, I gave a presentation to the Dallas IREM group about the importance of giving social media a second look.

Before I set foot in the place, I knew that the crowd I was going to speak with would be

a bit more skittish about getting involved with social networking

a bit older than the average audience I’m used to speaking with.

But I also knew that they would be open to hearing me out and that they’d be taking notes… cautiously.

So, I did what I knew: I told them that one of the best ways to tap into social media could be done by channeling Jimi Hendrix (you can view the un-animated version here).

Bats in the belfry?

At first glance, you’d think I was crazy for trying to do such a thing for this kind of audience.

Quite frankly, it got me a little nervous presenting this information in that kind of way.

But my experience and instincts told me three things:

1. Music is a great way to help the social networking medicine go down.

2. Using Jimi Hendrix as an example would get ME revved up.

3. Using Jimi Hendrix would (hopefully) get THE AUDIENCE revved up.

And it paid off.

Not only was the audience engaged, but they really began to grasp what I was telling ’em.  Go figure.

So what does this all mean for you?

Whether you’re writing materials for a new client, gearing up for a new business pitch or hammering out some facts for a presentation to your peers…

The fact that they were there to hear some dude talk about social media points to the obvious fact that they are at least curious about it; so there’s room for being a little “different.”

I also knew that I was going to be part of one of the last presenters for the day, so I had to punch up the presentation.

Given the fact that the audience was a bit older, I bet on the idea that they would not only know who Jimi Hendrix was, but (at the very least, even if they didn’t like his music) that there was a certain amount of respect for what he did.

Know What Works For You

The idea of presenting to an audience about how his music inspired me  to think a little differently in business got me excited.

This led to an energy and enthusiasm to “get it right” in a way that naturally seeped into the slides.

I wasn’t going to talk analytics or measurement (Chuck Hemann, K.D. Paine or Don Bartholomew would be better suited for that). I was going to hone in on showing the value of a person using “their own swing” when they go up to bat in social networking.

As you get ready to speak with a client; present an idea to your peers; or talk about why you believe why using something like Foursquare may be just the ticket for an event, you want to have some back-up right?

Because people are going to ask questions.

Why do you think this will benefit us?

How are other organizations using this?

Do you have any stats or research to back this up?

You’ve got to have those answers ready.

Because at the end of the day, you don’t have to be a rock star like Jimi Hendrix to have that kind of influence – even if it’s on a “small” scale.

With more than 14 years of public relations experience, Narciso Tovar is president and founder of Big Noise Communications, that runs on Method + Moxie. He lives in Dallas with his wife, Rhonda, and has a strong track record in media communications, both “old” and “new,” with organizations such as Vonage and the Wall Street Journal Online. One of the most energetic young voices in social media, you can easily connect with Narciso on  Twitter.