How to Measure PR and Marketing Outcomes on Snapchat 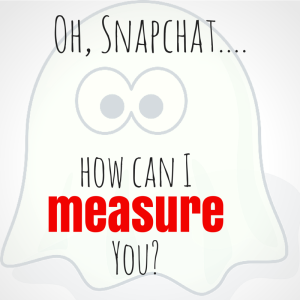 “Snapchat has overcome some remarkable hurdles by tapping into features that make it appealing for certain demographics, and that doesn’t mean just tweens and millenials. The critical question is how the core and evolving user base changes over time, the rollout of new features and the steady growth in the subscriber base over time and what those subscribers look like from a demographic perspective.” ~Elissa Nauful President/CEO BallywhoSocial

Snapchat is special. I’m not sure that its uniqueness has as much to do with its product offering as it has to do with its audience. As exhibit #1 check this graph out:

Those percentages aren’t insignificant given that Snapchat has about 100 million daily users. Leah Fein-Roque, who specializes in tech PR and digital marketing understands the Snapchat appeal personally:

“I have a 21, 19 and 16 year old using it mostly for everything including texting. Texting and emailing are dinosaurs to them. We snap together over 100 times a day.”

Despite Fein’s experience, it appears that Snapchat is a closed alternative to Facebook or Instagram for social communication. There is a delineated age where you are using Snapchat or you aren’t, which means that your mom, grandma and cool teachers aren’t there. There may even be peer groups that are more prone to use Snapchat than others. PlayStation Social Media Strategist Genny Harrison says that the gaming community hasn’t found Snapchat as useful to build community as other industries have.

“In gaming, Snapchat is looked at as a fad, where retail has embraced it. Freshly Picked for instance branded their Snapchat account almost like talking to your best friend – very casual and giving sneak peaks into upcoming lines.”

Indeed, many of the social marketers and PR practitioners that I reached out to are perplexed by Snapchat although most agree that the potential audience is compelling.

If you’re not entirely familiar with Snapchat, it is a mobile-exclusive app that (besides having a narrow age demographic) has these features:

One “campaign” tactic to understand is the “Snapblast” which marketer Nick Cicero says are watched to completion at a higher percentage than similar brand stories. He defines Snapblasts as:

“Snapblasts are when a snapper sends a burst of posts out, stringing multiple videos, photos, images and drawings together in a short period of time (generally under an hour). These types of stories are meant to be consumed at once and tell their own unique story.”

These are the main features, but for brands the content goal for Snapchat is perfectly summed up by marketer Andrew Cunningham:

“Ultimately, the goal for any brand on Snapchat should be giving a new perspective not typically seen elsewhere.”

Of course, a lot of this can be measured. But these metrics probably are not informative about how your Snapchat campaigns are contributing to your overarching PR or marketing goals. So, let’s look at the mechanical goals (things we can see on Snapchat when we look under the hood) and engineered goals (things we can integrate into Snapchat to make it more effective for us).

As you can imagine there are a lot of straightforward metrics for Snapchat. These mechanical metrics give you a good indication of what is going on when people are viewing your content.

Cunningham describes the three measurements that Snapchat offers you:

Cicero describes the different metrics that you can discern about snaps and stories with fairly little effort:

From these you can calculate an engagement rate or whatever convoluted metric that you want to, and it will still leave you dissatisfied (if any of these metrics are satisfying for you, it may still help to read on).

Fortunately we have a mechanism to employ that can help to give us a better sense of how Snapchat (or anything, really) is contributing to your business: engineered metrics.

I attribute the term “engineered metrics” to Johna Burke, EVP of BurrellesLuce. The basic idea is that mechanical measurements like the ones above (or analogously Facebook Likes, Reach, Fans, et cetera) don’t really give us the measurement that we want. If we adopt them, we are not measuring anything tangible.

So, the idea of engineered metrics is to start at the end state: What do you expect Snapchat to do? Do you sell from Snapchat? Refer from Snapchat? Do customer service on Snapchat? There isn’t a right or wrong answer to this, only one that satisfies your goals.

Once you know what you want to measure, you go back to see how you can accomplish this. Odds are (unless you are unimaginative or like to be especially opaque) mechanical metrics won’t suffice.

Snapchat is often compared to the “wild west” for brands, presumably to point out how little infrastructure and rules are built out for businesses. You can’t explicitly target or use tracking cookies, Snapcash can’t be used for commercial purpose, and you probably only get one impression per person per campaign, so your engineering options are fairly limited.

The biggest engineering feat that you can implement would be to drive action off of Snapchat attributable back to a Snapchat campaign. You can do this with campaign unique codes, or somewhat effectively (because of the time expiry) with Google Analytics.

Marketer Brian Honigman also points out that Snapchat has a traditional marketing tactic built-in: A/B testing. He writes that you can use the private snaps feature (snaps sent to a limited audience rather than to your entire network) to A/B test a campaign.

Snapchat is special because of its demographic make up. But if you think it’s an enigma, it’s an enigma that 100 million people have figured out (it’s not an enigma!!!!).

Vetting good PR and marketing metrics for Snapchat is no different than on any other platform. As such we can engineer appropriate metrics to tie Snapchat to our business objectives. As the great Shonali Burke describes the process:

1. Begin at the end (what you’re trying to achieve).

2. Measure what’s important (not everything is).

3. Don’t get stuck in measuring tools; make the tools work for you, not vice versa.