No One Puts Social (PR) In a Corner 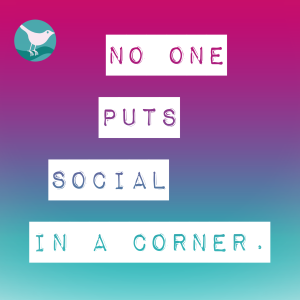 As I was working on a strategy memo yesterday, I started noodling with Venn diagrams (I love those things) to illustrate what a truly social PR strategy should look like.

Why? Because I think we often talk about how such a program should work, but for a lot of people – clients included – it’s hard to really understand that unless there’s some kind of visualization involved.

What is a bit frustrating is when clients don’t understand how it should work because their agencies haven’t explained it to them properly… and nine times out of 10, that’s because the agency itself doesn’t really have a clue. It’s seen and heard enough to do a cut-and-paste job on a PowerPoint deck, slap some logos on it and present it as a “social media strategy.”

But most of the time, social media is only used to push pre-approved messaging out, and there’s nothing strategic about it.

I’ve been trying to figure out why this is still happening. And the sad truth, I think, is that it’s not uncommon for practitioners to still think of social media strategy as something that is separate from the greater communication or PR strategy. And I believe this happens primarily because even today, many practitioners do not understand the mechanics of social networks, let alone the interplay between traditional and social media. As a result, they have no idea how to strategically integrate the two.

But no one puts Social in a corner.

So, as I Venn’d away, I thought this might be interesting and useful to you. Plus, I’d love to know if you can help me improve upon this. If you can, please let me know in the comments, and then I’ll create an updated version of the diagrams. And if you do find them useful and want to use them, as long as you give credit where it’s due you’re welcome to do so!

This is typically how things look before you embark on a social PR strategy. Everything is basically separate, or siloed. The left hand’s not talking to the right, forget about doing the Hokey Cokey. You’re probably pursuing a pretty traditional PR program (not that there’s necessarily anything wrong with that), and social media lives separately.

You have no idea who your community is, or where they are, so you’re definitely not engaging with them. Nothing is integrated, and even if you have a content calendar, it’s not really doing anything for you. If you find your agency is talking a lot about “generating buzz” and “promoting tweets” and “using Edgar,” this is probably the state of affairs you’re in. 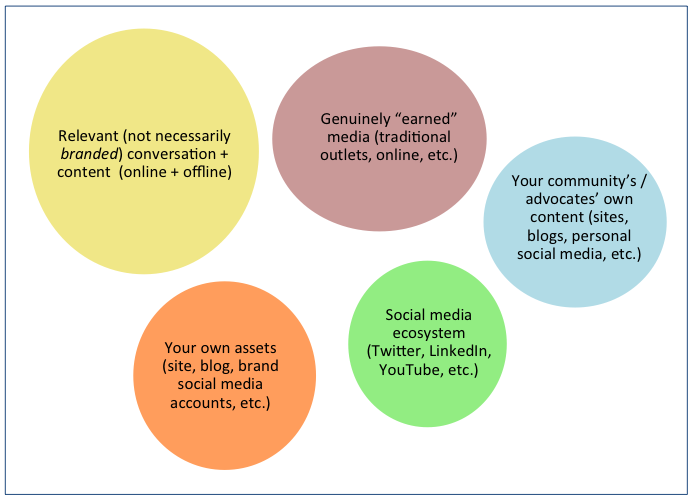 Hallelujah! Somehow it happened! You got social… or, perhaps, Social got You. Maybe you’ve been reading some great books, maybe you’ve attended a really good workshop on social PR (heh!), and you realize that if everyone’s not playing nicely, there’s not much point to the game. You start to focus on inbound and outbound tactics, you make an effort to listen, converse and respond, and you start to build community.

You know that you want something to happen as a result of all your (or maybe your agency’s, or both) efforts… not just “buzz” thanks to “Edgar” (just so you know, I have nothing against Edgar). You are being diligent about educating yourself about metrics and analytics, and starting to use those insights to improve your programs. Your social PR program is a lean, mean, dancing machine. 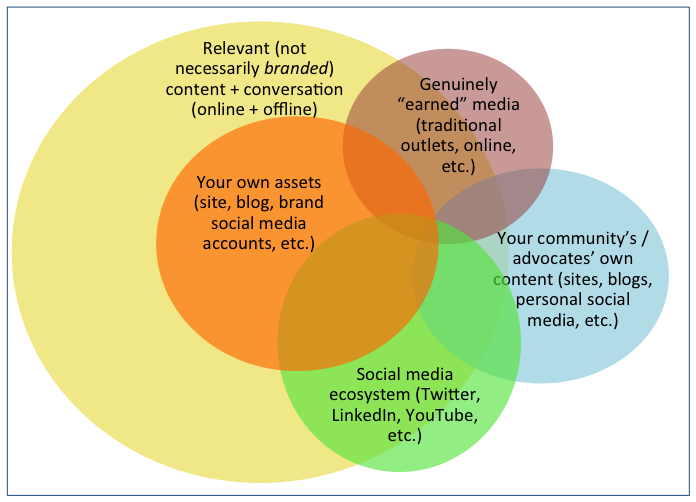 I think the diagram is self-explanatory, but I do want to point one thing out: you see how the circle with “your own assets” just got quite a bit larger than in the “before” scenario? This is intentional.

Because as you start to integrate your efforts and socialize them, your awareness and reliability as a content source starts to grow. So you slowly start to acquire a larger piece of the overall conversation (yellow circle), which is exactly what happens when you build thought leadership… which is a large part of what PR – and social PR – is about.

Bringing Paid into the mix

And if you decide you really want to ramp things up, you realize that paid media inevitably has to be part of the mix these days, else all the content you and your team are working so hard to create is going… nowhere. In that case, your program probably looks something like this. 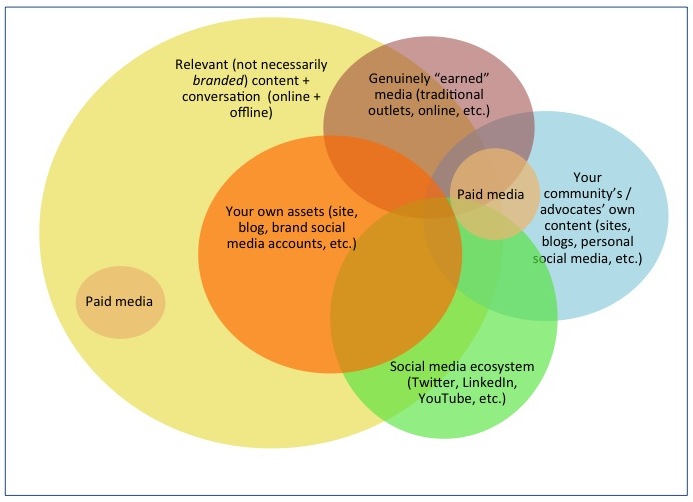 There you have it. Before social PR, after social PR, and when you get to a truly PESO state of mind.