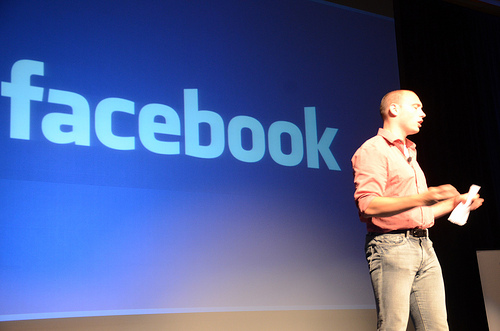 The biggest news in the history of social media took place Friday when Facebook had its IPO, becoming the biggest social name ever to join the public market.

Its $108 Billion offering came in as the 3rd largest ever (behind Visa and Enel), so the day was significant not only for social media types but also for market watchers.

What has surprised me a bit is the amount of negative comments in the Facebook conversation. Admittedly, I am a market skeptic, and Facebook had a strange first day on the market by popping six percent and cruising back down to a 23 cent gain at the bell.

But we’re talking about one of the most powerful cultural forces of the 21st century … and you can actually buy a piece of it.

You would think people who spent a large chunk of their lives wrapped up in digital conversation would embrace that.

One particular line of attack on Facebook’s future has been the belief that it will some day be displaced because it has lost its cool factor, corporatized, “sold out,” etc.

And that premise seems bunk to me for five distinct reasons:

1. Facebook is not like the tech companies that crashed in the 90s, and anyone who stops for two seconds to think about that knows it.

Pets.com was a website where you could get anything related to pets. It had a generic name, offered little to no convenience factor, and dealt only with people who spent bukus of cash on pets.

Facebook is a cultural phenomenon that mesmerizes people into broadcasting private information and personal opinions in static form. A huge majority of the market is a potential customer, and a huge chunk of the businesses out there already spend money on it.

Sure, GM got off of there, but GM can afford TV block time and is hardly a surefire fit for general social media advertising.

2. Facebook is the market leader now, and doesn’t show signs of going away immediately.

That means you get to jump into the market and buy a blue chip best-in-breed at a reduced $38 price marker based on general uncertainty that has little to nothing to do with Facebook’s business model.

When the world goes into crisis, Facebook gets more of its most prized possession (information). This is info they’ve already monetized to a certain extent, and will figure out how to continue doing.

3. Critical mass is undoubtedly on Facebook’s side in a market where that is the most important factor.

Google+ has stalled because, in spite of its amazing features (seriously, Hangouts is cool and you know it), it doesn’t have the already-existing numbers.

If Google+ were real, it would be a Ron Paul rally right before the New Hampshire primary, complete with a scraggly, motley crew of male, long-haired techies who think weird pictures are the funniest form of humor (OK, that wasn’t entirely fair, but you get the picture).

Almost every other SN that has popped up has fallen into a niche (Google+ = male techies, Pinterest = Lifestyle ladies, OK Cupid= somewhat unusual dating, etc.).

It represents the term “social network,” and has the story and movie to prove it. And the main character is still part of the script.

So when things start to topple a bit in its main category, it has a diverse portfolio with products that are close to Facebook. It can understand the operations of these other companies enough not to mismanage them (heck, half of them already have some attachment to/compatibility with Facebook anyway).

Yet they are different enough to spread risk in ways that make sense. Facebook takes seriously its risks to its core while building for the future.

5. Yahoo! was once best in breed and was knocked off its pedestal by Google, right?

And in spite of the differences between search and social, there may be some historical precedent that makes sense for us to briefly examine there.

But let’s skip a step and just grant that some other company will pass Facebook and knock it in to second place (I don’t think anyone see it falling to third or lower like MySpace, but hey, it’s a random universe).

That’s not just a “good investment” – that’s one of the all-time greatest investments you could ever make!

And I haven’t even mentioned the best part: The stock has had five good splits to date:

In a nutshell, if you had thrown a HUGE chunk of change at Yahoo! at IPO, you would be filthy, dirty, aristocratic pig covered in one-and-a-half-foot mud rich.

If Facebook is the next Yahoo!, it’s a shrieking buy.

As an extension of that comparison, I’d like to take the Yahoo! analogy a bit further to make it complete.

Yahoo! was, undoubtedly, a huge factor in the lives of anyone who used the Internet in the 1990s. It was the search bar we used. Its news and finance section have almost always thrived. And the mail system is very good.

But is it the same cultural phenomenon that Facebook is? Absolutely not.

To get the scoop from your friends nowadays, you go to Facebook.

When Yahoo! was on top of the search world, you got that kind of information from conversations and away messages on AOL Instant Messenger.

Facebook is a totally different beast that represents a much different picture than AIM or Yahoo!

To brush that off is a total injustice to the academic conversation regarding social media as a whole.

(“Shocking” disclaimer: I own a few shares of Facebook.)