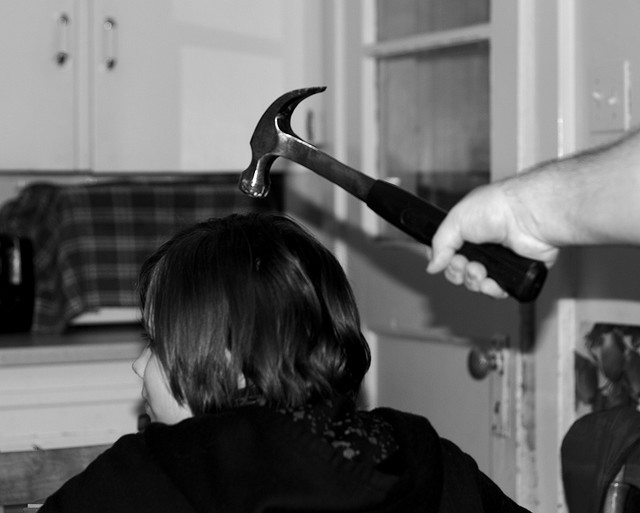 I cannot believe how much drama there is around Klout’s most recent changes.

I mean, come on, people, it’s only a number.

How many times do any of us have to say that?!

Let me tell you a little story.

Last week, I clicked through to an email Klout sent me telling me I had new notifications (yes, now I’ve realized that they’re doing that every day, and I’m not going to fall for it any more; suffice it to say I wasn’t having a particularly smart day) on my profile.

When I looked, I noticed something funny. Literally funny, not weird funny.

You see, Klout had decided I was (am) influential on bacon. Also Kim Kardashian.

I started laughing. The bacon I could somewhat understand, since the last couple of weeks I’ve been having fun by tweeting (and Facebooking) about bacon, and people played along. Sometimes it’s literally been just one word. “Bacon.” Nothing else.

(Where Kim Kardashian came from, I know not.)

When I was doing this, Jen Zingsheim jokingly asked if my goal was to become “influential” on bacon, so it tickled me to see that, as far as Klout went, this had apparently happened. Note that this screenshot was taken at 8:21 am ET on October 21.

I was joking around about this online, and next thing I knew, some of my friends decided to really pull the other one.

So at 12:59 pm that day – just a few hours later, guess who was listed among the top +K recipients for Kim Kardashian (click on the image for a larger version to enjoy my “art”): 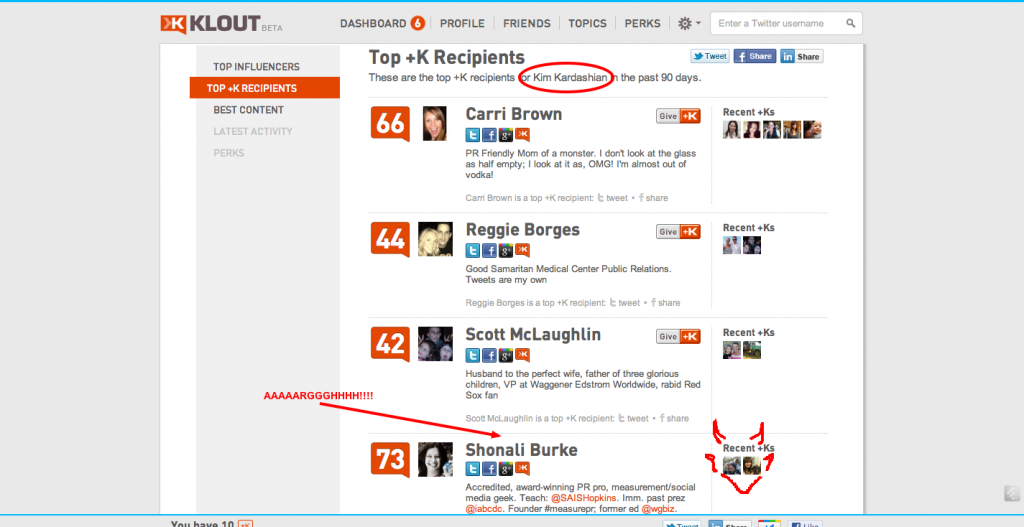 Note the devil horns I gave Gini Dietrich and Joe Hackman, because they made it their mission in life that day to get as many people as they could to give me +K on Kim Kardashian.

Then, at 6:31 pm that evening, here’s where bacon and Kim Kardashian stood, as far as my alleged influence goes:

I took these screenshots because I was enjoying the game, and I thought I might be able to use them later.

Turns out I was right. Ha!

(And, by the way, my score has dropped since then as well.)

You know as well as I do that I am not influential on either of these topics.

I mean, if I told you to eat utterly, butterly, delicious bacon, day in and day out, would you really listen to me?

Conversely, if you’re a huge Kim Kardashian fan (God have mercy on your soul), and I told you to not do a single thing to support that (IMHO) heinous excuse for a family empire, would you really listen to me?

And doesn’t the fact I (currently) have a higher Klout score than Richard Edelman – one of the true leaders and influencers in our industry – speak volumes?

Mark Schaefer made an excellent point when he said things like Klout scores and follower numbers do matter from the point of social proof. He also made it clear that he doesn’t buy into this, and that we are living in a “very, very weird world.”

Do I buy into it?

I understand that some people do. And as much as I’d like to take Klout and throw it out the window, I understand it’s not going away any time soon.

But I do not, for one moment, believe that your relevance, or influence, or importance is determined by a number. Especially not a number that can’t even tell activity from influence. Faugh.

Think Traackr would come up with those results? I highly doubt it.

Since I have to live and work in this “very, very weird world,” as Mark put it, I know I have to keep an eye on it.

So please, let’s stop the madness.

There are 5 comments Join the conversation