What Makes a Mentor?

About a month ago, I saw a tweet from Shel Holtz, ABC, that piqued my curiosity: 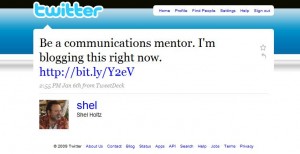 Not one to bridle said curiosity, I followed the link Shel provided and immediately signed up for the Mentorship Connection. Again, almost immediately, I was told (via e-mail) that I had been matched with a willing mentee: Nick Lucido – and now it was up to the two of us to connect and figure out how I could help Nick move towards his PR career goals.

What Nick and I have in common are a passion for smart PR and the desire to give back to the broader PR community by being actively involved in it. Thanks to the similarity in our natures, it took the two of us almost a month to speak via telephone this past Friday (though we’ve been corresponding via e-mail and Twitter since we were put in touch). I was struck by his drive and conviction – how many of us knew while still in high school that PR was our chosen path? – but most of all, by his willingness to extend himself along paths unknown.

What Makes a Mentor?

About a week after I saw Shel’s tweet, Kami Huyse wrote an insightful post on why mentors are vital to the development of one’s career. I’ve had many friends, colleagues and supporters who have helped me over the years, and I hope there will be many more.

But as I read Kami’s post, it reminded me of the mentors who have – perhaps without knowing it – been instrumental in helping me navigate my career and grow into my PR shoes. John Mason, one of the most visionary educators this world has seen, was an early mentor; since I moved to the U.S., I can never repay the kindnesses my first boss, Charly Zukow, and measurement queen Katie Paine have shown me. More than kindness, though, they exemplify the dictionary definition of a mentor:

What John, Charly and Katie have even more in common is that – at least from my point of view – they didn’t come to me and say, “Hey, I’m going to mentor you.”

What they did, instead, was lead by example, letting me know their respective doors were always open. They recognized potential that I did not, and armed me with the confidence to plumb that potential. They steered me towards taking on ever-increasing challenges that, when I succeeded, showed me possibilities I didn’t even know existed. And when I failed – because we all do – they let me lick my wounds but, before long, picked me up, dusted me off and set me back on track.

What John, Charly and Katie have in common is that they earned the title of mentor. And whether they know it or not – or like it or not – they will always be my mentors.

If I can do even one-tenth for Nick of what has been done for me, I will count myself fortunate. And perhaps then I’ll earn the title of being his mentor.

What about you? How have your mentors inspired you and earned your trust? I’d love to know your thoughts.