Why Livefyre Is The Best Blog Comment System Evah 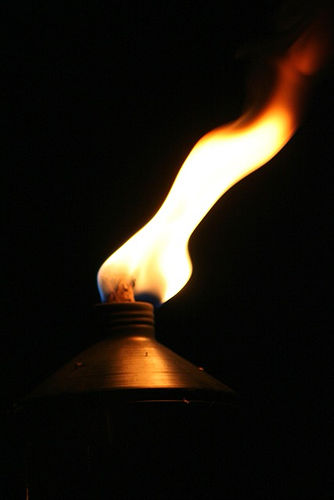 This is part of the Blogging for Grasshoppers series

If you publish a blog, there are three things I want to tell you today.

I’ll give you the short version, and then the long version.

1. I think Livefyre, the comment system that has been implemented on WUL for just under two months, is da bomb.

3. Livefyre has some big news coming out soon… but you’re going to have to read through to see what that is.

If #s 1 and 2 are enough for you, head on over to Livefyre and see how cool it is (or just scroll through some of the posts here, to see it in action).

If not, here’s the long version

I’m not one to get overly excited by blog comment systems, but this one has me blown away.

In a nutshell, what Livefyre does is integrate the two social networks most of us use (and when I say “us,” I mean people like you and me, who are online quite a bit) into its platform.

This allows us to invite folks not already in the conversation, to the table.

It’s the fact that you can do this while you’re commenting, and not after the fact.

So, for example, if I’m commenting over at Gini’s place, or Joe Hackman’s place, and I think of someone with whom I had a similar conversation, or who would be interested in participating in this one, I simply type an @ into my comment.

Assuming I’m signed in via Twitter (or Facebook, or both), Livefyre then pulls up a list of handles, and I simply select the one that I want to bring in.

Like this (except that Joe Fernandez didn’t bite, in this case): 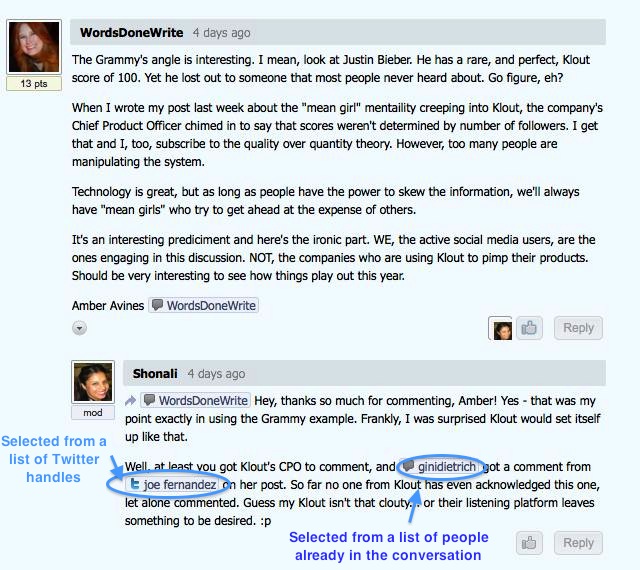 Livefyre asks me I want to to let them know that I mentioned them in the conversation.

If I decline, nothing happens.

But if I accept, then Livefyre sends them a notification that appears in their stream, in that platform.

I don’t have to do anything else.

And since blog comments are often where the conversation’s at, this is the simplest and, I believe, most effective way of extending and enriching that conversation.

And it’s so simple! I can’t believe no one thought of it before.

But I guess that’s what makes Jordan Kretchmer – founder of Livefyre – special.

(Thanks, Jordan, for letting me use your mug shot).

In Jordan’s words, “We are creating a community of commenters and content producers, connected through conversation and interests.”

Here’s what else I’ve noticed since implementing Livefyre, and why I love it so… in fact, I’ll try to count the ways:

1. Their customer service is great.

Initially, I had some trouble with the Livefyre plugin. I immediately got on the horn with Jeremy Hicks, and it was resolved very quickly.

Then it turned out that the Livefyre plugin was causing some problems with the WordPress Editorial Calendar plugin which I also use and love.

Zack Grossbart, the WPEC plugin creator figured that out, and I put him in touch with Jeremy to talk geek speak.

2. They truly believe in community.

Jeremy, Jenna Langer and other Livefyre staffers take the time to comment on blogs using the Livefyre system, and you can tell from their comments that they genuinely enjoy doing that.

They understand that in order to build a community, you have to be a part of that community.

It’s not just something I’ve noticed. Jordan has as well:

“In most cases, Livefyre at least doubles the amount of comments people get, and on a lot of those sites the increase in total engagement is four times what it was before Livefyre.

“Most of our bloggers see big increases in total pageviews, time on page, and overall visits within four weeks of Livefyre being installed.”

Over and above this, I’ve found that as I’ve commented on other blogs using Livefyre, I’ve met folks I might not otherwise have met, and we are slowly becoming part of each others’ communities.

4. Spam is significantly down.

As you might know, I publish regularly in three places including WUL, and have back end access to one of the other blogs, which currently uses Disqus.

Yes, they both use Akismet, and I have another spam-blocking plugin on WUL which did help somewhat.

But ever since installing Livefyre, the difference in spam is amazing.

Hardly any on WUL. The other one – it drives me nuts.

I asked Jordan about this, and he confirmed that it wasn’t just me imagining stuff, that this is something they actively work on. But the details (which were shared with me) are a bit hush-hush right now, so I can’t tell you much about it.

Except that it works.

I know they’re used to try to keep spammers out, but I’ve had far too many experiences where a captcha didn’t work properly, and a comment I’d put much thought into was gobbled up and spit into a black hole of orphan comments.

Or the captcha was so illegible, that I’d have to put it in over and over again.

As a non-bot, this is extremely frustrating!

With Livefyre, there’s no need for captchas.

I strongly suggest you check it out, particularly if you publish a WordPress blog.

And they’ve got a lot of cool stuff coming down the pike, which leads me to the big news.

This means that you don’t have to sign up for a beta invite, but should be able to grab it on Sunday for your WordPress blog.

[I received this update from Livefyre late last night, at which point this post was already scheduled, so wanted to let you know as soon as I could.]

How cool is that?!

And if you’ve already been using Livefyre on your WordPress blog, you’ll notice a few changes:

There’ll be a new comment design, with multiple nesting levels

The file plugin will be 85% smaller, which means it will move much faster

You’ll have a new administrator/moderator panel, which will give you a lot more options to moderate the conversations with.

Livefyre also has plans to shortly (most likely by the end of March) introduce integration with Drupal, Typepad and Blogger (it already supports WordPress, Joomla and open web install).

In addition, it will introduce a CommentLuv-style feature, should the blogger decide to turn it on, that will allow commenters’ most recent posts to appear at the end of their posts.

You know that I wouldn’t urge you to use something if I didn’t find it useful.

And with Livefyre, I don’t just find it useful, I find it highly enjoyable as well.

So do please check it out.

And let me know what you think!