The 15 Types of Social Media Know-It-All 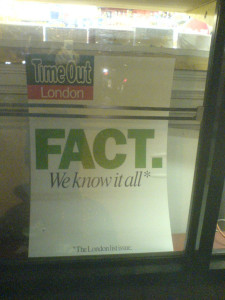 It’s one thing to educate yourself, including on social media. Education is a good thing. But how can you make sure you’re not constantly running into a social media know-it-all… or, worse, becoming one yourself?

That’s a very real danger, in this day and age. There’s a social media “guru” wherever you turn, and it seems as if everyone and their brother is telling you how to do something on social, or not. Sometimes it gets really hard to tell the wheat from the chaff, as it were, doesn’t it?

1. The constant self-promoter (from Jennifer Donovan)

Ah, don’t we know it. But social media is, after all, a great vehicle for promotion (not only promotion, though, we agree on that, yes?). So, like the Three Bears’ beds, how do you know when it’s too little, too much, or just right? I asked Jennifer to elaborate, and she said:

“I think it all comes down to authenticity. Are you really trying to help someone, build a relationship, share useful insights or just trying to make yourself look important and worthy?”

‘Nuff said. So please don’t ever, ever call Derek that.

3. The dream-maker  (from Larissa Fair Schimel)

In her words: the “I can make you famous” promise.

People: pay attention. The only person who can get away with promising to make you famous is Eli Gold. And he is not real.

“The one that thinks their one-size-fits-all solution can really be wrangled onto every single client, no matter their needs. This person also judges those that don’t do things exactly the way they do it very harshly.”

5. The robot (from Jason Keller)

“…the one that isn’t passionate about making a difference. If they are working for clients and just trying to bill hours or in-house and not trying to figure out what else can be done to optimize, drive more business, or reach new people, then they’re the one I can’t stand…”

If you’re not listening, how can you help identify what exactly needs to be changed?

7. The one note wonder (Kathie Anderson)

This is the one who “hangs their hat, and their clients, on a one-prong solution, such as SEO or Twitter, or Instagram.”

8. The calculator (from Eileen Masciale)

Eileen said, this is the one who doesn’t understand “community.” They are all about ROI without providing value.

“Provide value – helpful information, tips, etc. – 80% of the time and ask for something 20% of the time. You need to build the community authentically so that there are people there when you have a call-to-action. And if what you offer all the time is valuable to people in your community, then they will be more likely to respond when you are asking them to do something.”

Words to live by.

9. The stomper (from Matt LaCasse)

Dan came up with several attributes for this one:

I think those are all characteristics of the “lazy cheater,” don’t you?

12. The foghorn (from Michael Dougherty)

Or, as he put it: “The one who has ZERO engagement on any of their mediums.”

I would really watch out for this. You cannot do social if you don’t know how to get (and give) engagement on social.

13. The dictionary (from Randy Bowden)

i.e. the one who “has an answer for all marketing needs with little proof of performance.”

Or, as he put it, the one who’s EVERYWHERE!

15. The academic (from Sohini Baliga)

This is “the person who doesn’t actually use it but knows allll about how lame it is anyway.”

Over to you. What kind of social media know-it-all can’t you stand? I’m sure you can add to the list… and it is Friday, after all!

Happy weekend, and don’t forget to join us on Tuesday for #measurePR’s 5th birthday chat. It’ll be a zinger!