A Blogging Motto With Apologies To The Olympics 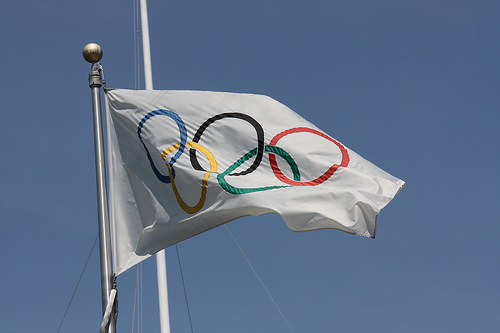 This is part of the Blogging for Grasshoppers series

Remember the motto of the Olympic Games?

Or, in English, “faster, higher, stronger.”

When it comes to a motto for blogging, I suppose one could apply that… but how would that be fun?

I mean, my blog posts will never run faster than a cheetah, or soar over tall buildings better than Superman (or my dog Suzy Q., for that matter), or be stronger than Mr. T.

I pity the fool!

The “fool” being my posts, of course. Not you. Never you.

When it comes to blogging, maybe a better motto – at least for me – might be shorter, tighter, funner (made-up word alert!).

Aargh! How short can I get?!

Regardless of how you feel about lists (Twitter, or otherwise) or what everyone had for lunch (me, I’m much more interested in dinner), Twitter is a great way to start practicing writing good headlines.

When you have only 140 characters to do this with, it makes you evaluate every letter and every space you have at your disposal.

Over and above that, you may need to leave room for one or more hashtags, assuming you’re trying to use hashtags to share the post with folks who follow the hashtag but not necessarily you.

Talk about short and sweet!

When I was in high school, part of our English Language classes entailed what they called prÃ©cis exercises.

Essentially, we’d be given a few paragraphs – usually an excerpt from a story or essay – and required to condense them into far fewer words – say 50 – without losing the essence of the original.

The way we’d go about this was to create a grid on a lined sheet of paper – yes, we actually wrote longhand those days – and try and fit in all the words we needed into that grid.

Punctuation and hyphenated words were allowed in the same grid; so much angst went into figuring out whether or not a word was hyphenated or, in fact, two words.

Try it. It’s much tougher than it sounds.

When you’re trying to tighten up your blog posts, you are not trying to fit into the jeans have been hanging in your closet for the last 5 years, “because one day…”

You’re trying to get simpler, easier to read, more likely to be understood.

You may or may not have the Oxford dictionary at hand, but you certainly have it online.

When you’re stuck for words, turn to the dictionary. This helps to not just expand your vocabulary, but prevents you from using the same word over and over again.

Not to mention using more readable – and speakable – words in your posts.

“Use,” instead of “utilize,” for example.

Check out Gini Dietrich‘s recent post on grammar pet peeves for more, especially in the comments.

Grand Cousin to Dictionary’s Poor Sister, Thesaurus is one of my favorite places to go when I’m trying to get my blog posts tighter.

Poor Sister would say, “reminds me of.”

See what I mean?

This is a made-up word, so you have every reason not to take any of what I say from here on out seriously.

(You don’t have to take any of what I say seriously. On your own head be it.)

There are so many ways to do this, but I’m going to start with two.

There is something simply magical about alliteration.

“Around the rugged rock the ragged rascal ran.”

“The badly-dressed idiot kept running around a big stone.”

Ok, so the second one might be funny (hey, I think it is), but it doesn’t have the lyrical power of the first.

Monday’s post, An Ode to Mondays, was an experiment in this.

I was stuck for a post and for some reason the word “ode” was playing in my head (oh, I know why! I’ve been re-reading Georgette Heyer’s The Grand Sophy!).

And it was Monday.

So I decided to write an ode – in the “ABABCDECDE” format – to Monday.

Could be worse. But at least it was verse. Heh.

Silly as it sounds, it’s a great way to try and break out of the mold.

Maybe not Olympic material, but good enough for blogging, don’t you think?

What do you think? What are your tips to tighten up your blogging? I’d love to know.