Are You Using Social Media to Talk to Yourself? 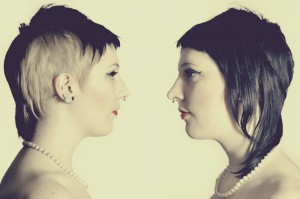 Of all the people you follow on Twitter what percentage have interests or values different than your own?

A recent visit to our campus by journalist Chantal HÃ©bert and her lecture “Missing the Forest for the Trees: A Look at the State of Political Coverage in the Social Media Era” had me thinking about how I use these tools.

For those unfamiliar with HÃ©bert, she is best know for her work as a weekly participant on the political panel At Issue on the CBC’s The National (in Canada The National is like … if it was food you’d spread it on toast and have it sustain you for life. It’s a big deal here).

She is also a national affairs writer with the Toronto Star, a guest columnist for Le Devoir and L’ActualitÃ©, and has been covering the major moments of Canadian politics since I was old enough to have a driver’s license.

One of the key messages of her lecture was that – in her experience – social media tends to narrow people’s perspective, not widen it.

The reason for this is that it is a tool that makes it very easy for people to customize the information they receive … and people, not surprisingly, tend to choose information that reinforces their own views.

“Once you are on a tour and covering a campaign you are looking on Twitter but the people who are on Twitter, they are junkies and so your mirror is not a window to the world,” said HÃ©bert.

“It’s a mirror and it’s reflecting you to yourself. I have rarely seen the guy who delivers my mail and the person who takes my blood at the clinic tweet in between the two blood tests. And I haven’t noticed the teachers stop teaching to tweet.”

(SIDENOTE: That last line made me smile. I wanted to make the stage spin around like on the Price is Right to reveal the professors here who are using social media in the classroom. They are mindblowing. Anyway …)

That changed fairly quickly though. The value of public profiles was hard to ignore.

I started to look at social media as a powerful communication tool that could help me in my work, so I started following communication professionals to learn how best to do that.

Pretty soon the vast majority of the people I followed were communications, marketing and PR professionals. Sure, I jazzed things up by following people from different sectors (Higher Ed, corporate, not for profit). But, for the most part they were all people in my industry.

It certainly wasn’t a bad thing. I learned a lot. But, as the group got larger and larger the content in my feed became homogenized.

There was a handful of thought leaders and hundreds of people echoing them. Even though they were echoing intelligent things, it was still an echo.

HÃ©bert described the people she was seeing on Twitter as a “super engaged, super interesting, but super disconnected audience.”

I’m still working out how to diversify my Twitter feed.

For now I’m following more people from my offline community: faculty, staff, students, people who live in my city.

How about you? What are you doing?