Curiosity: One of the Three Cs of Public Relations 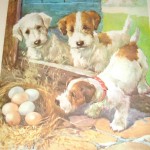 “Curiosity is one of the permanent and certain characteristics of a vigorous mind”
~ Samuel Johnson, “The Rambler” (March 12, 1751)

Looking back on my somewhat checkered past, I see that I’ve always been your basic “Curious George.”

So I did the logical (in my mind) thing. I stuck a metal nail file in one of the holes.

According to my Mother, I blew out the entire electrical system in our house…and I, myself, turned a creepy blue color.

Then, in my early teens, I constructed a battery-powered transistor radio. Very basic, but it worked!

Well, I thought, if a battery enabled me to pick up a radio station 15 miles away… what might I get if I substituted direct-to-household current wiring for the battery?

(Note to readers: Have you ever seen a transistor explode?? It’s awesome!! The cap of the transistor blew off and embedded itself in the wall on the opposite side of the room! And … again … I blew out the entire electrical system in our house.)

These incidents were probably nascent signs of my yet-unrecognized passion for public relations… a raging curiosity to ask “why?” or “what if?”

Status quo is a good thing in that it gives you a focal point, a starting place, from which to create (hopefully) bigger and better plans and programs…that don’t explode.

I often write, both for Waxing UnLyrical and for my own blog, about passion and creativity, and I am constantly urging my undergrad PR students at Curry College as well as my graduate-level Organizational and Professional Communication students at Regis College to “think outside the box”… to be curious.

I also caution them that they will likely be met with resistance or skepticism from some of the more “conservative” (aka “stodgy”) members of their organization.

My favorite memory from my Air Force days is the greeting I got from my supervisor on my return to the U.S. from an assignment in the Philippines: “I heard you were coming. Don’t make waves.”

Apparently my activities while stationed overseas preceded my return to Virginia. Ha!

But where would we be without curious wave-makers? Christopher Columbus… Guglielmo Marconi… Steve Jobs… Tim Berners-Lee… and oh, so many others!!

For public relations professionals, curious wave-making can lead to wonderful benefits for clients or employers. We need only look at the programs and events that Edward L. Bernays, arguably the “father of Public Relations” created on behalf of his clients.

One of my own particular favorites was dubbed “Light’s Golden Jubilee” and celebrated the 50th anniversary of the invention of the light bulb.

Where “less curious” others might have been satisfied with a press release and a local town event, Bernays created a nationwide spectacle that reminded the public – and the media – of the significance of this day for the world.

To the end, Bernays was insatiably curious. Once, at a PRSA Boston event, I introduced Mr. Bernays to my wife. On discovering that she was Chinese, born in Vietnam, and spoke six languages, he immediately began grilling her, alternating between English and French, which
both spoke fluently. (I had to break in and end the interview after 30 minutes of non-stop questioning.) Bernays was in his 90s at that time… and still eager to learn!

So, for those of you either “veteran” and “up-and-coming” public relations professionals, ask the unasked questions … push the envelope.

“No man can reveal to you aught but that which already lies half asleep in the dawning of your knowledge.” ~ Kahlil Gibran, “The Prophet: On Teaching”