“K” is King in Brand and Company Naming 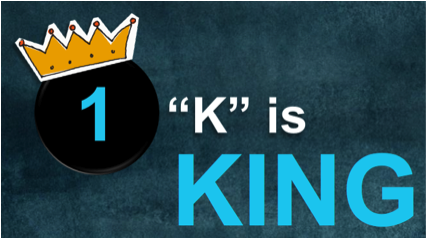 The power of the letter “K” has always fascinated me.

In college, one of my favorite adjectives was “kafkaesque,” a word with three “K” sounds.

The first time I heard this word, it resonated with me, and I wanted to say it again and again. There was something special about it.

“K” is the 11th letter in the alphabet and one of the least frequently used letters, but is believed to make people laugh and feel good. It’s a voiceless velar plosive and an oral consonant with air escaping through the mouth only. This cross-linguistic sound is represented in over 40 languages, from Bengali to Turkish to Kagayanen.

Read the next paragraph slowly. We all should be aware of this letter’s history.

The Etruscan alphabet – a slightly modified form of the Greek alphabet – merged with the Latin language of the Romans. The Etruscan language didn’t have a “G”, but a letter that sounded like “K.”

Latin has both a “K” (written like “C”) and a “G.” The Greek gamma, the third letter of the alphabet, could be written as “<” or in a curved form like “C.” The Romans retained the Greek “K.” Interestingly, in Old English, the letter “K” was rarely used and often omitted.

The Letter “K” in branding

The other day I watched a short video by Sara Blakely – the inventor of Spanx brand products and a fellow Southerner – where she reflected on the value and edginess of the letter “K.” Spanx (ends in the hard “K” sound) delivers a great product that fills an important gap in the undergarment market.

Having a great company and product name adds to market appeal and most likely has had a direct affect on the company’s million dollar sales record.

Why is the letter “K” so strong in branding? Why are we drawn to this sound?

“K” is good for branding. According to one author writing about brand names, those beginning with the letter “K” are easier to remember.

“So, what is there in a name? Absolutely everything. It is one of the most important assets we have, providing instant recognition and a shorthand for our brand values. If we don’t understand the importance of our name, if we don’t nurture and cultivate it, and if we don’t manage it throughout the growth of the company, we are missing a very important trick and we could be in big trouble.”

There are even 25 piano brand names that start with the letter “K.” That should tell you something.

Kidzone calls “K” “a dependable letter,” while another site says that “K” represents extremes and notes that: “when a person with a ”˜K’ in their name enters a room, all know it.”

George Eastman, founder of Kodak, also liked the letter “K” and believed it to be strong and incisive. When asked about the Kodak name, he said:

“I devised the name myself. The letter ”˜K’ had been a favorite with me – it seems a strong, incisive sort of letter. It became a question of trying out a great number of combinations of letters that made words starting and ending with ”˜K.’ The word ”˜Kodak’ is the result.”

Called the granddaddy of funny sounds by the Advanced Public Speaking Institute, the letter “k” is referenced by aging vaudevillian Willie Clark, the main character in Neil Simon’s “The Sunshine Boys.”

“K’s” are everywhere – even on the dollar bill. Well, not all of them (check yours!). The “K” in the black circle on the dollar bill signifies the Federal Reserve Bank in Dallas that placed the order for the bill.

There’s even a Facebook page called “The Letter K.”

Donna Vincent Roa is a master strategist and communication rainmaker who designs and builds best-in-class communication portfolios. She is Managing Partner & Chief Strategist for Vincent Roa Group LLC, a small, woman-owned firm that specializes in communication about the earth and its people. She also blogs and can be reached at donna [a] vincentroagroup [dot] com.